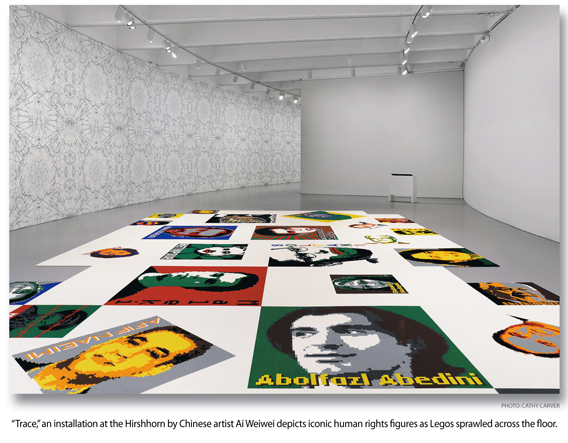 In the Hirshhorn Museum, lifeless Lego portraits of 176 human rights activists have been spread across the floor in a misguided exhibition that feels like an unintended insult rather than an honor for these courageous men and women who have risked their lives across the world.

Chinese artist and human rights activist Ai Weiwei has suffered beatings, government surveillance and imprisonment by the Chinese government, so his demeaning portrayal of fellow activists who have faced similar persecution is mystifying. In an ironic twist, Ai’s rapid ascent in the fickle art world has occurred largely because of the persecution he has faced, which has provided an imprimatur about the relevance of his artwork that is sometimes undeserved.

Ai was imprisoned for 81 days in China in 2011 on bogus charges, and he was banned from traveling abroad until 2014, so he missed his first major exhibition at the Hirshhorn Museum in 2012, which offered a compelling mix of sculpture and installations. His current exhibition titled “Ai Weiwei: Trace at Hirshhorn” is a retread of the least intriguing work from Ai’s 2014 exhibition at the infamous Alcatraz federal prison that is now a major tourist attraction in San Francisco. The Lego portraits were planned by Ai and constructed by dozens of assistants at Alcatraz Island during his ban from international travel. With autocrats and dictators wreaking havoc and raining bloodshed across the world today, art that personifies the struggle for human rights is vital, but this exhibition doesn’t deliver that message with any heart or soul. 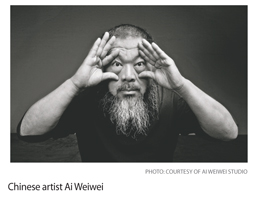 The Lego portraits are complemented by two graphic wallpapers. Together, the massive installation spans 700 feet around the entirety of the museum’s second-floor galleries, taking advantage of the building’s unique circular architecture. Some of the Lego portraits depict famous activists, such as Martin Luther King Jr. and Edward Snowden, while others aren’t well-known, including imprisoned Bahraini activist Naji Fateel. In a significant oversight, less than 10 percent of the featured activists are women.

Many people have fond childhood memories playing with Legos, those idyllic afternoons spent building castles with moats or planets populated by aliens and robots. But using a child’s toy to depict persecuted human rights activists is insensitive and ineffective. The static, boxy portraits look like low-resolution pixelated images because Ai wanted them to resemble surveillance photos, but their humanity also has been erased. The portraits vaguely resemble these courageous activists, but their soulless images and vacant stares don’t stir any empathy or outrage. They are just disembodied plastic faces cast onto the floor.

The activists are identified only by their names in the portraits, and a video screen in the corner of each gallery provides paltry information, listing little more than their home country, criminal charges and prison sentences. We learn nothing about their daily lives, their struggles or any successes gleaned from their tireless efforts. In a video at the end of the exhibition, Ai said he chose Legos because they represent a simple language that is recognizable to everyone. While the planning took some time, he said the Lego portraits are “very, very easy and clear, and you almost cannot make a mistake.” Creating the Lego version of paint-by-numbers portraits may be very easy, but it clearly was a mistake in this case. 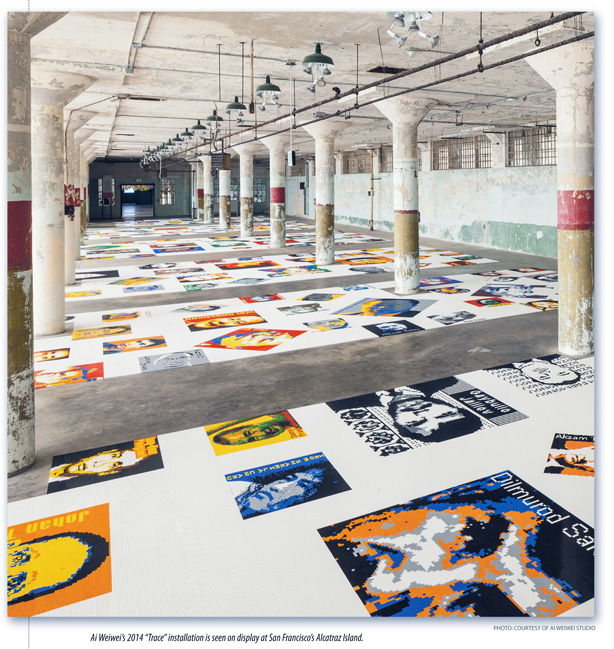 The floor also is a demeaning place to feature activists who have sacrificed their lives or freedom. Viewers must literally look down on these men and women who have become a bumpy carpet that is in constant danger of being trampled on. Many Muslim activists are depicted and placing their images on the floor adds another layer of insult. In the Arab and Muslim world, shoes are considered unclean and showing the sole of your shoe to someone, even by casually crossing your legs, is an insult. Muslims remove their shoes before entering a mosque in a sign of respect and deference. So why would Ai think the floor was a proper place to feature Muslim activists who have suffered torture and imprisonment? It displays a stunning level of ignorance or indifference, even if it was unintended. 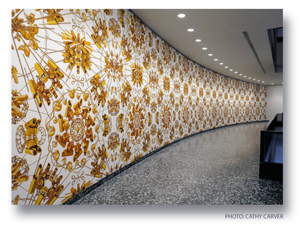 At the entrance to the exhibition, an ornate gold-colored wallpaper features interlocking images of handcuffs, surveillance cameras and the bird logo for Twitter, which is banned in China but used by Ai and other activists to reach a worldwide audience. The Hirshhorn proclaimed Ai had created a new wallpaper specifically for this exhibition that wraps around all of the galleries, but it’s just a black-and-white version of the gold wallpaper that has been shown before at other museums. Any power contained in the wallpaper’s free speech message is undermined by seeing the same golden design featured on socks, scarves and travel cups for sale in the museum gift shop. Capitalism has co-opted protest.

Ai’s work has always depended more on stunt and spectacle than contemplation, including photos of himself breaking ancient Chinese vases or flipping off the White House and other institutions of power. But he sometimes hits one note, such as the dangers of surveillance, so many times in different exhibitions that it fails to resonate. Ai is a courageous and outspoken figure who speaks truth to power in a repressive society, and his contributions as an activist ultimately may be as important as his artwork.

The Hirshhorn has staged some excellent exhibitions this year, including the blockbuster Yayoi Kusama exhibition that illustrated the depth of her work beyond the wildly popular Infinity Mirror rooms. That exhibition ran for three months, but the Hirshhorn has unfortunately hopped onto the art world bandwagon by devoting six months and an entire floor to this Ai exhibition, sacrificing half a year and an enormous amount of prime artistic real estate that could have been better used by many other artists.