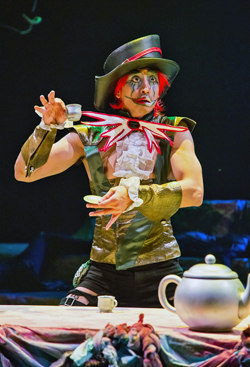 Synetic Theater’s “Alice in Wonderland” puts a darker twist on the Lewis Carroll fairytale to illustrate the perils and uncertainty of growing up.

What makes extraordinary theater is not just the skill with which a play is executed, but also the selection of the producer to bring the right script to life.

Synetic Theater has hit gold on both fronts — execution and play choice — with its current production of “Alice in Wonderland.”

Synetic’s distinctive medium — mostly wordless, hard-hitting acrobatic and dance analyses of literary classics — is intense, to say the least. By choosing “Alice,” it successfully marries forceful concentration with a unique retelling of a nimble fairytale. But not without Synetic’s signature darker twists, of course.

“Growing up as I did, in the former Soviet Union, I wasn’t exposed to a lot of the color, playfulness or bizarrely fantastical symbolism seen in [Lewis] Carroll’s masterpiece,” Paata Tsikurishvili, the play’s director and founding artistic director of the company, explained. “Our interpretation of ‘Alice’ is not focused on the sunniness and delight of childhood, as so many adaptations are. Rather, I see this tale as a journey — a journey through childhood into awareness, and one appropriately full of danger.”

Indeed, this production’s coupling of Alice’s delight for adventure and fear of the unknown is its recipe for magic. Unlike other Synetic wordless productions, this one makes good use of Carroll’s inventive dialogue and riddles.

The enchantment starts before the play has even begun.

As the audience trickles in, they feast their eyes on Daniel Pinha’s fanciful set: a floor-to-ceiling spectacle of a syrupy candied forest. Pastel-colored, rolled-up pieces of cloth resemble cotton candy, trees are shaped like flowers and fanciful rope bridges fill the stage. Although the backdrop puts the audience in a state of childlike wonder and openness, there is something about its excess and surrealism that threatens danger.

Alice’s “reality” — her bedroom and attic — is separated on thrust platform stages to the right and left, while her “dream” takes over the main stage.

The play begins with Alice (played by plucky and wide-eyed Kathy Gordon) having a tea party with strawberry tarts and her (creepy-looking) dolls. She is rudely interrupted by her new tyrannical governess (Renata Veberyte Loman), who tells Alice it is not time for a tea party, confiscates the dolls and stuffs them into a chest in the attic. She then hands Alice a pack of cards to play with and eats the tarts herself. 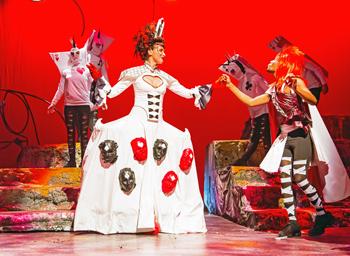 As Alice dozes off, her dolls — the White Rabbit (a precious Tori Bertocci who spastically jumps herself into a tizzy about being late to the Queen’s garden party) and the Cheshire Cat (Alex Mills, whose acrobatic, joyful romp with a ball of yarn will give you goose bumps) — escape the trunk and come alive. If we didn’t already, now we surely know that we’re not in the metaphorical Kansas anymore and are in for a wild ride — a psychedelic ride at that.

Even those deeply familiar and in love with the Lewis Carroll novel, adapted here by Lloyd Rose, will be overwhelmed with the amount of creative energy and detail put into this production.

Although Alice seeks newness down the rabbit hole like a toddler first learning to walk, she faces menacing risks. She realizes she’s wanted for tart theft, discovers the Queen (not coincidentally also played by Loman) beheads those who are not on time, and when she obeys signs that say “eat me” or “drink me,” she spontaneously shrinks and grows at inopportune times.

“If I’m not who I was, who am I?” Alice ponders in a metaphor for passing through life’s inevitable stages.

The rest of the cast is equally enjoyable, recognizable yet unique, and move through the plot at lightening speed.

Irina Tsikurishvili, co-founder and assistant director, along with costume designer Kendra Rai let their creative juices loose and have fun updating some of the characters. 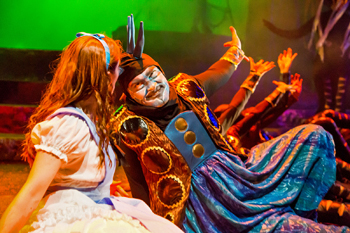 The Mad Hatter expresses his zaniness by crumping (dance moves related to hip hop); Tweedle Dee and Dum are sleazy, punked-out teenagers with mohawks who scare Alice with their Jabberwocky story; and a hookah-smoking Caterpillar tries to entangle Alice in his cocoon. Meanwhile Dodo (Eliza Smith in point shoes) and her mismatched love, a Lobster, engage in a beautifully choreographed Swan Lake-like ballet.

Luckily, like all regretful but illuminating acid trips, this one too comes to an end. Alice wakes up to her comforting mother, who tells her the evil governess has left, swearing that Alice’s Cheshire Cat stuffed animal somehow came to life and intentionally tripped her down the stairs.

This “Alice” may not exactly be the fairytale from your childhood, but take a lesson from Alice: Childhood might not be safe to repeat.