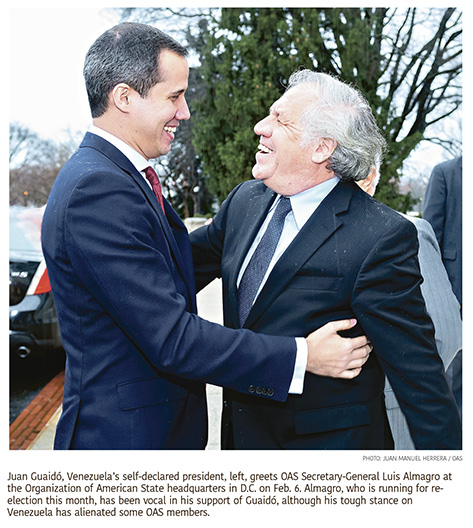 On March 20, the 34 members of the Organization of American States will decide whether to re-elect Secretary-General Luis Almagro to another five-year term.

The 56-year-old former Uruguayan foreign minister rose to prominence in 2015 shortly after replacing Chile’s José Miguel Insulza at the helm of the OAS. Under Almagro’s leadership, the institution — long criticized as a toothless bureaucracy — suddenly became relevant again. It took an active stand against human rights abuses in Nicaragua. It played a key role in the November 2019 resignation of Bolivian President Evo Morales after having found “clear manipulation” in the vote that re-elected him. And most significantly, the OAS — and Almagro in particular — have loudly and consistently demanded an end to Nicolás Maduro’s autocratic regime in Venezuela.

Both favor dialogue to resolve the Venezuela crisis and both say the crisis has consumed too much of the OAS’s attention at the expense of other important issues. This has set up an interesting contest between Almagro, who is strongly backed by the Trump administration, and his two opponents, who enjoy the support of some Caribbean nations that have criticized Almagro for choosing confrontation over consensus-building.

The Inter-American Dialogue, a Washington-based think tank, has been hosting a series of conversations with all three candidates.

“The Venezuelan tragedy is, with good reason, the overriding issue in Latin America today. The scale of the country’s refugee and migration crisis is likely to surpass Syria’s this year,” Dialogue President Michael Shifter told The Diplomat. “Almagro has made his mark by being very outspoken and confrontational toward the Maduro dictatorship. It’s hard to think of any previous secretary-general who took such a forceful stand on an issue.”

International aid agencies estimate that at least 4.7 million Venezuelans have fled to neighboring Colombia, Brazil, Ecuador and other countries over the past five years; the U.N. warns that number could reach 6.5 million this year. Since 2013, Venezuela’s once prosperous oil-based economy has shrunk by an estimated 65%. Hunger, disease, power outages and crime have now become rampant under Maduro, a former bus driver who inherited the presidency from Hugo Chávez in 2013 and whose 2018 re-election was widely denounced as fraudulent.

No surprise, then, that all eyes are on Almagro, who enjoys the backing of the United States. After all, Washington funds 59% of the OAS budget. (Almagro is also supported by Brazil, Colombia, the incoming government of Uruguay and several other countries.)

In promoting him, Secretary of State Mike Pompeo said Almagro “is fearless in guarding against authoritarian regimes,” calling him a “secretary-general par excellence” and “a model for all other secretaries-general, inclusive of the U.N. secretary-general.”

But some in the 15-nation Caribbean Community (Caricom) — a significant voting bloc in the OAS — say Almagro is not a model the organization should be emulating and that the body is better off promoting dialogue to resolve the Venezuela standoff. To that end, Caricom members have largely abstained from supporting resolutions critical of Maduro.

Many Caribbean governments maintain strong relations with Venezuela as part of the leftist ALBA regional bloc. They also enjoy subsidized oil at preferential prices through the Petrocaribe scheme begun by Chávez.

Two such countries, Antigua and Barbuda and St. Vincent and the Grenadines, have thrown their support behind Espinosa, who served under Ecuador’s former populist president, Rafael Correa. She also appears to have the support of Mexico, whose foreign ministry — through its director of regional organizations, Efraín Guadarrama — tweeted Feb. 13 that the OAS leadership “needs an urgent renovation” and a “woman secretary general.” (Interestingly, Espinosa has not received the endorsement of her own government; instead, Quito is backing Almagro’s candidacy.)

“But she made clear that, if elected, she would not make any personal public statements about the Venezuelan ruler,” Oppenheimer wrote in a Feb. 14 column. “Taking a tacit swipe at Almagro, she added that the OAS chief should ‘heal the wounds that have been unnecessarily opened among brotherly countries in this hemisphere.’

“Of course, that’s exactly what Maduro wants,” Oppenheimer suggested. “Requiring a consensus by the 34 member countries to authorize the OAS chief to criticize Venezuela — or any other dictatorship — would amount to silencing him or her. It would only take the votes of one or two Venezuelan allies to keep the OAS chief from making any critical statement.”

But in a Jan. 27 interview with The Gleaner, a leading Jamaican newspaper, Espinosa said the continued focus on Venezuela has basically starved the Caribbean of attention and sidelined other pressing issues. 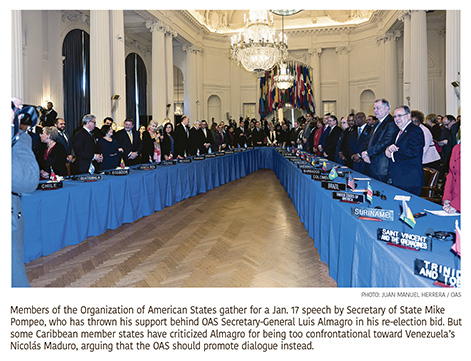 “I think we have to acknowledge that one country, and issues pertaining to that single country, have filled the agenda and more than 90% of the energy of the organization,” said Espinosa, promising that Haiti would be at the top of her agenda if she wins the election. “We are not denying it’s a serious matter the OAS has to address, especially when a country in the hemisphere is in trouble. But it should not take the oxygen out of the entire agenda, and unfortunately, [the issue of Venezuela] has polarized and divided the hemisphere.”

Like Espinosa, de Zela has complained that the OAS is too focused on Venezuela, to the detriment of environmental degradation, indigenous rights and other issues.

Ronald Sanders, Antigua and Barbuda’s ambassador in Washington, also agrees with Espinosa’s argument that the OAS needs to be a neutral arbiter. Writing in the Jamaica Observer, he said that “Almagro has sought to use the OAS as an international platform for advocating his personal positions and the narrow purposes of some governments. Further, he has been divisive and failed to build consensus and promote dialogue as well as understanding among states.”

Another problem with Almagro’s strident anti-Maduro approach — and by extension Washington’s — is that it’s failed to oust Maduro. Last April, the OAS voted to accept representatives of Venezuela’s political opposition led by Juan Guaidó — the self-declared president — and expel the delegation that represents Maduro. Guaidó has also been recognized as Venezuela’s legitimate leader by some 60 countries, including the U.S.

Yet despite the international recognition — and a slew of U.S. economic sanctions on Caracas — Maduro retains the support of the military and remains firmly entrenched in power. That’s why some governments have been urging dialogue to end the political impasse, although negotiations between Maduro and the opposition mediated by Norway failed to yield any results.

“To remove the dictatorship of the 21st century, there is no magic formula,” he declared at the 49th OAS General Assembly in Colombia last June. “We hope that political pressure continues to accumulate.”

Pompeo clearly agrees — and, some say, is himself pressuring Caricom members to get them to agree as well.

During Pompeo’s January visit to Jamaica, where he held a roundtable with Caribbean leaders, some governments complained that the U.S. secretary of state excluded them because of their opposition to Almagro’s re-election.

Barbados, the current chair of Caricom, decided to skip the meeting with Pompeo after its prime minister, Mia Mottley, said certain countries hadn’t been invited.

During a press conference, Pompeo did not identify which countries had been invited, although he said, “There’s no intent from the United States to divide Caricom — not yesterday, not today.” 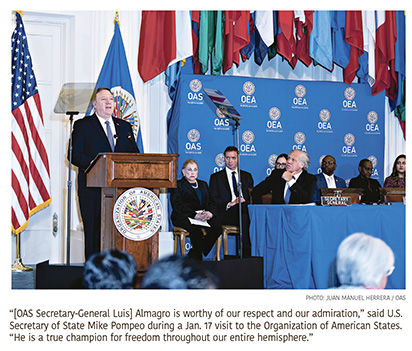 While Barbados opted to skip the meeting in a show of support for Caricom members that felt snubbed by the U.S., John Beale, who represented Barbados as ambassador to both the United States and the OAS from 2009 to 2016, argues that his colleagues throughout the English-speaking Caribbean are being short-sighted on the matter.

Writing in a Jan. 14 op-ed for Barbados Today, he said that many Caricom leaders have been critical of Almagro’s management style “because he often does not consult Caricom leaders or pay attention to their wishes when he makes major decisions. Mr. Almagro has, in effect, alienated himself from the expectations of many Caricom leaders, all of whom voted for him in 2015.”

But Beale points out that Almagro continues to have the support of major countries such as the U.S., Canada, Colombia and Brazil, and that “history will show that his decisions were generally good ones — despite not being popular in some circles.”

Meanwhile, if Almagro is re-elected, Beale argues that Caricom will improve its odds of finally getting its own secretary-general someday. That’s because Nestor Mendez of Belize, assistant secretary-general under Almagro for the past five years, is running unopposed in his bid for re-election. Beale suggested that the best way for the regional bloc to get the representation it has long wanted at the OAS is to help Almagro win in 2020 so that Mendez keeps the number-two spot and then have Mendez run for the top spot in 2025.

But what happens next is anybody’s guess. Pompeo has not hesitated to subtly remind OAS members that America’s generosity might be contingent on Almagro’s re-election.

“Just a handful of years ago, the U.S. Congress openly entertained slashing funding for the OAS,” he said during a speech at OAS headquarters on Jan. 17. “Now Congress is more eager than ever to support what we’re doing together, because [Almagro’s] leadership values capture the bipartisan values of freedom and of democracy. And the good financial management here too gives confidence that OAS progress will be effective, cost-effective and transparent.”

Shifter of the Inter-American Dialogue speculated that “in part due to Pompeo’s pressure campaign, Almagro now appears likely to get the 18 votes he needs for re-election, though the result is by no means assured.”

He added: “Unfortunately, to date neither Almagro’s hardline approach nor other efforts to resolve Venezuela’s political crisis have succeeded in improving conditions on the ground or moving the country closer to a democratic transition.”

Even so, Oppenheimer warned that if Almagro should lose to either Espinosa or de Zela, based on their public comments, “the OAS would return to what it once was: an irrelevant institution where governments sent their retiring diplomats to have a good time in Washington and discuss meaningless issues.”