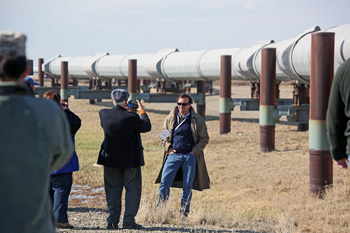 Ice-capped mountains, dense forests and, more recently, Sarah Palin’s reality TV show usually come to mind when one thinks about Alaska. But for 39 ambassadors in Washington, the picture has changed. They now see Chilean Ambassador Arturo Fermandois strumming a guitar on an Alaska Railroad Corp. train as it hurtles through picturesque terrain between Seward and Anchorage.

“It was my privilege to offer my modest music and singing to the ambassadors during about three hours,” Fermandois said of joining the Carhartt Brothers, a local Alaskan band. “My colleagues became very, very enthusiastic and very happy, and we went from Latino songs to country music to European songs.

Chilean Ambassador Arturo Fermandois has his picture taken in front of Milepost 0 on the Trans Alaska Pipeline, part of a State Department-sponsored trip for foreign ambassadors to Alaska this summer to learn about the state’s energy and tourism industries, as well as its native community and natural beauty.

“We normally don’t have the opportunity of getting together in a different format,” he added. “Experience America gave us the opportunity to do that. That’s useful for our duties, for our responsibilities here. If I needed to call now the ambassador from Russia, after spending those three days and three hours singing in the train, we’re much more confident on addressing any issue we may have to our government.”

Experience America is a twice-yearly program organized by the Diplomatic Partnerships Division of the State Department’s Protocol Office, which has worked in recent years to expand its outreach to the local diplomatic corps. Established in 2007 by former Chief of Protocol Nancy Brinker and continued by her successor, Capricia Marshall, Experience America has taken dozens of ambassadors and their spouses to cities in California, Florida, Illinois, New York, Georgia and Texas (also see “Envoys Go Beyond Beltway to See Slice of America” in the November 2008 issue of The Washington Diplomat).

“This program has absolutely been able to build new bridges of cultural understanding,” Marshall said. “The Bahamian ambassador talked at length with Alaskans about the problems they both face in educating children from distant villages, whether on different islands or in far-flung villages without road access in Alaska. In Atlanta, Congressman John Lewis [D-Ga.] spoke with the ambassadors about marching on Washington with Martin Luther King Jr., and some shared with him the stories of how the American civil rights movement impacted their own countries and their own fights for freedom and equality.

“As the ambassadors learn more about America, its people, culture and institutions, we are strengthening our bonds economically, socially and politically with countries around the globe,” Marshall added. “New infrastructure, business investment, cultural and academic exchange programs — all of these can come out of an Experience America visit and all of them help bring us together in our increasingly interconnected world.”

For its seventh adventure, the program extended the bridge all the way to the northwest edge of America. Envoys from Latvia, Ghana, Russia, Sweden, the Bahamas, Morocco and Belize, to name a few, headed to Alaska from June 21 to 24 to learn about the state’s energy and tourism industries, its native community and, of course, tour its breathtaking landscape.

“The goal of the trip is really to showcase the best of America, create people-to-people relationships,” said Kamyl Bazbaz, a spokesman for the Protocol Office. “It’s really sort of both a trade mission and a cultural mission all in one. We want to share the rest of our nation with these senior foreign officials and foster mutually beneficial relationships with the places that we visit.”

To that end, each trip features a diverse itinerary — meetings with local businesspeople and government officials, as well as cultural and historical sightseeing — and is open to all ambassadors. An average of 40 goes each time, so there are some newcomers and some repeat customers on every trip. The Protocol Office polls the diplomatic corps to find out where they want to go, and Alaska got the most votes this time.

“I think they all have different reasons,” Bazbaz said of ambassadors’ interest in the country’s 49th state. “For some of them, it’s the last frontier. It represents this American frontier and so a lot of them really wanted to see it. Alaska, being that it’s so remote, faces a lot of the same issues that their own countries do. It doesn’t have to be an Arctic nation. On an island nation, there are the same shipping issues: How do you get things to places that are so remote?”

On this Experience America program, the group started in Anchorage with a welcome reception co-hosted by Marshall and Alaska Gov. Sean Parnell that featured wildlife and native dancers. Next, the envoys met with Anchorage Mayor Dan Sullivan and business leaders and discussed global Arctic issues with Alaska Lt. Gov. Mead Treadwell. The next day, they made their way to the North Slope and Barrow, home of Milepost 0 on the Trans Alaska Pipeline, and mingled with Kuparuk and Inupiat indigenous peoples. They capped the visit off with a boat tour of the Kenai Fjords of Resurrection Bay in Seward and a ride in a glass-enclosed train car back to Anchorage.

“One thing that we do on every visit, which I think is a real highlight, is dine-arounds, where we will ask locals to host the ambassadors for dinner,” Bazbaz said. “This way, as opposed to going to some catered event in a bland hotel ballroom or something, we’re actually getting them into people’s houses. Each person will host, let’s say, five to 10 ambassadors and their spouses and then invite some of their own friends to come.” 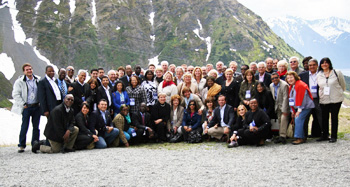 More than three dozen ambassadors from Washington, joined by their spouses, traveled to Alaska this summer as part of the twice-yearly Experience America initiative organized by the State Department’s Protocol Office, a program launched in 2007 by former Chief of Protocol Nancy Brinker that has taken envoys to California, Florida, Illinois, New York, Georgia and Texas.

In addition to making personal connections with Americans outside the Beltway, the ambassadors got an inside look at one of the country’s most individual states, and all the issues unique to that state. Of particular interest to the envoys was Alaska’s treatment of its native people and the spectacular, energy-rich environment on which it sits. “The way that Alaska has dealt with their native communities is something that they want to emulate,” Bazbaz said. “We had places like Chile and Peru that have large indigenous tribes, and populations there who are looking for better ways to integrate them and represent them, so Alaska was a great model for them to learn from.”

Indeed, Chile’s Patagonia region and Alaska share many traits, Fermandois discovered. “We have this beautiful landscape, we have glaciers, fjords, an untouched nature, sea, and we have beautiful mountains, we have native people we need to take care of, native cultures, languages,” the ambassador said, noting that he has briefed officials in his country on the Alaska Native Claims Settlement Act of 1971, which enabled indigenous people to become shareholders in regional companies and benefit from development. “That’s something very, very close to what we need in Chile in our region in the south.”

Japanese Ambassador Ichiro Fujisaki found efforts to protect wildlife remarkable in Alaska, an important trading partner with his country. “I … was impressed that people, I think, have made a lot of effort to keep it that way, preserve it. It doesn’t come naturally so I was very much impressed,” Fujisaki said, musing on the sheer abundance of space. “Alaska, all together, you have about 700,000 people and the space is four times Japan. In Japan, we have 120 million in the size of California — 80 percent mountain.”

Although new to Experience America, Fujisaki had been to Alaska before — when he was a junior high school student making his first trip to the United States. His travels required a layover in Anchorage. “I came through Anchorage airport and I still remember the big polar bear and the key chains I bought with little gold flakes in it,” Fujisaki recalled. “I went back and saw the polar bear, but this was a newer bear that was caught in the 1970s, it says. It was not the same old bear, but still it was awesome.”

Irish Ambassador Michael Collins was pleasantly surprised by the influence of his fellow countrymen in the far-flung U.S. state.

“I was a little surprised but greatly heartened by the contribution of Irish-Americans to Alaska politically, economically and culturally,” he said. “It was good to learn that the governor of Alaska, Sean Parnell, is of Irish background, as of course is the mayor of anchorage…. Even when we got as far north as Barrow, during our visit to the North Slope to learn about the importance of the oil industry for Alaska, we met with native Alaskan Mayor [Edward] Itta who proudly announced that he too was partly Irish.”

Of course, not all lessons were governmental in nature. Fermandois was one of a few ambassadors who sampled Barrow’s local fare of skin-on raw whale slices that were the size of a third of a finger.

“It’s very hard. It’s like the beginning of chewing gum, something like that,” he explained. “But then you feel the flavor of the ocean, of the Arctic. It’s like eating the ocean. I found it very, very good, very tasteful.

“And let me tell you that being Chilean and being so proud of our wine, it was surprising that there is no alcohol there,” he added. “We didn’t drink anything apart from water. In Chile, we would join that meat with white wine at least.”

The rendition of the Rolling Stones hit “Satisfaction” that kicked off Fermandois’s impromptu concert exemplifies how the ambassadors got to learn about one another without the usual formal D.C. trappings

“The ambassadors are singing along. You’ve got the Russian ambassador who is swaying to the Beatles with the ambassador of St. Lucia,” Bazbaz said. “If you stay in Washington and you’re only working in Washington, I think you would miss a lot of what makes America so unique. How often will they get an opportunity to go to Alaska? Some of these embassies can’t plan a trip themselves. They don’t have the pre-existing interest to go, but at the same time, as an ambassador to the United States, it’s their job to learn the most they can about the country and cable that back.”

“These trips help strengthen the diplomatic community by allowing ambassadors from different parts of the world who normally would not work together to forge new relationships,” Protocol Chief Marshall added.

“We really relaxed and got to know each other better,” Fujisaki agreed. “In Washington, there are many ambassadors around, but you don’t really spend that much time [with them]. You try to meet more Americans. So it was a very good occasion.”

The benefits of Experience America go both ways. “For us, if we can sow some seeds for a business connection, we’ve been able to succeed,” Bazbaz said. “And if we’ve been able to create this goodwill, which is so important — for the ambassadors to leave Alaska and say, ‘We understand America a little better now. We understand how diverse and how different it really is’ — I think it’s a great thing.”

The next Experience America trip will take place in October in another distinct American destination: New Orleans.