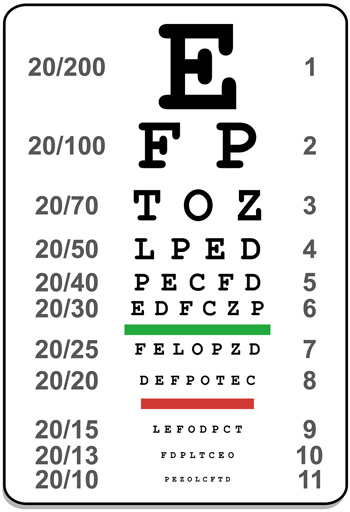 If you’re over 50, you’ve probably heard about age-related macular degeneration (AMD). The leading cause of blindness in the United States, AMD affects more than 1.7 million Americans, most of them over 60.

AMD occurs when fatty deposits, called drusen, form beneath the light-sensitive cells of the macula, the central portion of the retina that allows us to see fine detail. As the macula deteriorates, so does a person’s vision. Blurry spots begin to appear in the center of the field of vision — spots that grow dimmer and larger with time. Slowly, people lose their ability to do many of the vital tasks of daily living, like reading and driving.

The disease comes in two forms: dry and wet. All AMD starts out as dry, with the telltale yellow drusen beneath the macula. But in about one out of every 10 cases, the disease progresses to “wet” AMD, as abnormal blood vessels begin to form beneath the macula. These vessels are fine and fragile and prone to leak, and as they do, they can rapidly and dramatically destroy a person’s sight, sometimes within a matter of a few weeks or months. The onset of wet AMD is often heralded by the sight of wavy lines when looking at something like venetian blinds or other vertical line patterns.

Recently, ophthalmologists have borrowed a strategy from cancer researchers in fighting wet AMD. A host of new cancer drugs target a process called angiogenesis — the formation of new blood vessels. Blood vessels are good, except when they’re abnormal, either feeding a cancerous tumor or growing where they shouldn’t and leaking blood and fluid beneath the macula.

So when anti-angiogenesis drugs began having success in cancer treatment, eye specialists theorized that they could work against AMD too. But they figured that because such a drug would have to be able to pass into the retina, they’d need a smaller molecule than the versions found in anti-cancer drugs like Avastin. A small-molecule relative of that drug, Lucentis, was developed and quickly became a resounding success, stabilizing vision in 75 percent of patients and actually improving vision by two or three lines of a standard eye chart for a significant minority. The FDA approved the drug in 2006.

There was just one problem: It was expensive, costing $2,000 for a single dose. So many ophthalmologists decided to try “off label” treatment with the larger-molecule drug Avastin, which they found appeared to work just as well and costs much less, just $50 per dose for eye treatment. (It’s a lot more expensive in cancer treatment because you use much more.) But there were no clinical trials to confirm this approach worked.

Until now. A large study sponsored by the National Eye Institute, comparing Lucentis to Avastin for the treatment of wet AMD, published in the New England Journal of Medicine in April, found that Lucentis and Avastin work equally well in stopping wet AMD, stopping vision loss in its tracks for nearly all patients and improving it in many of them. “On all measures of visual acuity, the two drugs were virtually identical,” study leader Dr. Daniel F. Martin, chairman of the Cole Eye Institute at the Cleveland Clinic, said at a news teleconference announcing the study’s results.

But what about dry AMD? Although wet AMD causes much more rapid damage to vision, dry AMD can be devastating as well — especially in the cases when it progresses to a condition known as geographic atrophy of the central retina (GA). In GA, the deepest cells of the central retina degenerate, leading to the death of the rods and cones of the eye and the loss of central vision. There are no known treatments currently available for GA or for dry AMD in general.

Most research has focused on treatments for wet AMD rather than dry, but now there are several clinical trials looking into different approaches to treat dry AMD as well. One of the most exciting is a new trial of stem cell therapy, which began in July at the Jules Stein Eye Institute at the University of California, Los Angeles.

Twenty-four patients will participate in this pioneering trial and will have replacement retinal cells, developed using embryonic stem cells, injected directly into their eyes. A dozen of the patients have dry AMD, and the other 12 have Stargardt macular dystrophy, an inherited retinal disease that also damages central vision but has a much earlier onset — usually between the ages of 6 and 20.

The company in charge of the trial, Advanced Cell Technology, hopes that the retinal stem cells will take root, grow and multiply, eventually returning the retina to health.

Gary Rabin, chief executive officer of Advanced Cell Technology, said this “treatment milestone … opens the doors to a potentially significant new therapeutic approach to treating the many forms of macular degeneration. We believe that these procedures represent a key step forward in therapeutic stem cell research, and the capacity to treat a variety of devastating diseases.”