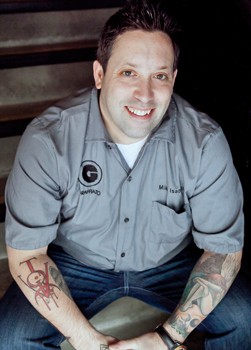 In June, the Chinatown/Penn Quarter transformation continued with the opening of chef Mike Isabella’s first restaurant, Graffiato, in an abandoned print press building on 6th Street. After three successful years as the executive chef of Zaytinya under the direction of José Andrés during which time Isabella’s work garnered much critical acclaim, and two stints on television in Bravo’s popular show “Top Chef,” Isabella has turned his attention to a project that allows him to explore the possibilities of the traditional Italian cooking he learned from his grandmother growing up in New Jersey.

Mike Isabella, a finalist on Bravo’s popular TV show “Top Chef,” taps his New Jersey roots and the Italian cooking he learned from his grandmother for his first restaurant, Graffiato.

Using a small plates concept, Isabella has designed a menu that brings together influences from his prior work in New York, Philadelphia and Atlanta, as well as his travels where he mastered the nuances of Latin, Greek and Middle Eastern cuisine. His dishes, many based on classic Italian favorites, are complex amalgams of these different traditions. Broken into sections by type of food or technique, the menu offers a range of dishes created with primarily locally sourced ingredients. (The names of many of Graffiato’s local suppliers are painted on a wall in the upstairs dining room above the ham bar.)

The menu features several different pastas, each of which is delicious. Hand-cut spaghetti, prepared with olive oil, poached cherry tomatoes and basil, is divinely simple. The roasted potato gnocchi, served with rich braised pork shank ragu and creamy burrata, is a more robust dish. A smooth white corn polenta is cleverly accented with small spicy pork meatballs and a soft egg. On a recent visit, however, the undisputed star of the pastas was the sweet corn agnolotti. Served in a buttery sauce with chanterelles and pine nuts, it’s a surprising but delightful twist on more traditional versions.

Graffito’s first-floor dining area is home to a large wood-burning oven that Isabella uses to create pizza and a number of roasted dishes. The pizzas are edible palettes where Isabella mixes flavors like colors to create delicious and sometimes unexpected culinary masterpieces. Melted leeks, farmhouse cheddar, bacon and baby potatoes give a hardy New England twist to the Vermont pizza, and in a nod to his home state, Isabella has created the Jersey Shore. Rings of fried calamari top a tomato and provolone base that’s drizzled with a sweet hot cherry pepper aioli. But perhaps the most surprising of the pizzas is the Turk. Built with pistachios, apricot and ricotta, it has a slightly Middle Eastern punch. Other delicacies coming out of the wood oven include tender pork ribs rubbed with Sicilian oregano and served with a thick coriander yogurt, as well as octopus — one of Isabella’s favorite dishes — served roasted over a potato puree, corn and kalamata olives.

If downstairs has the wood oven, upstairs the focus is the six-seater ham bar that faces into the kitchen. Guests can watch as the chef slices PorcSalt Holiday Ham from Pennsylvania, smoked country ham from Tennessee, or speck from Virginia for the charcuterie plates. Cheeses can round out the plates, with several excellent domestic artisanal varieties on tap.

Graffiato’s vegetable dishes are also a rare treat. One of the measures of a chef’s skill is the ability (and willingness) to work with the mundane as well as the sexy ingredients, and at Graffiato, diners wanting to go vegetarian will not feel like second-class citizens. The roasted cauliflower, done with pecorino and mint and garnished with thin twists of red onion, is one of the best preparations of this sometimes bland staple that I’ve ever tasted. Isabella also transforms humble red beets with chili and pork-fried almonds. More exotic and innovative, the fresh fennel is sliced paper thin and mixed with fresh stone fruit (most recently perfectly ripe peaches) hazelnuts and moscato. It’s superb.

Renovations to the former two-story industrial space are spare yet striking, not to mention costly, with Isabella and his partners — including Volt owner and fellow “Top Chef” contestant Bryan Voltaggio as well as Hilda Staples — putting nearly $1.5 million into Graffiato. The General Design Company gave the space a gritty feel with a nod to the building’s origins. Those familiar with the design firm’s work at Volt and Charlie Palmer Steak will recognize its characteristic minimal use of color and decorative elements. Exposed brick, cinder block and ductwork, wood and metal furnishings, and stark but effective lighting create an interesting effect that’s vaguely reminiscent of a factory lunchroom. (Isabella’s own decorating talent shows up in the handsome bamboo and oak tables he built with the help of his father-in-law.)

James Horn, Graffiato’s general manager and a former colleague of Isabella’s from Zaytinya, heads up Graffiato’s beverage program, a role he has played successfully in a number of other local spots. Horn has chosen an interesting collection of domestic and imported wines produced by smaller labels, along with a selection of craft beers that change periodically. He’s also developed a list of unusual cocktails that, like Graffiato’s food, pairs ingredients in surprising ways. The Tony Starr combines a very smoky Illegal Mezcal with sweet fruit puree, Solerno blood orange liquor and lime. It’s a powerful concoction. A bit gentler, the Staring at the Sun blends the smooth oak of Basil Hayden’s bourbon with apricot nectar, ginger and basil. Though both drinks sound quite sweet in their description, neither is. Rather, the ingredients accentuate the complexities of the handcrafted small-batch liquors rather than dominate them. 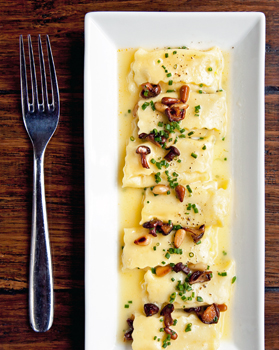 Among the inventive pasta dishes at Graffiato, the sweet corn agnolotti served in a buttery sauce with chanterelles and pine nuts is a surprising twist on more traditional Italian versions.

Isabella has said that the ingredients he would never go without are olive oil, sea salt, lemon, dill and chive. All of them make appearances in the savory dishes at Graffiato, and interestingly, some even appear in the sweet ones. A thin slice of a dense, rich, slightly sweet chocolate tart is set off with olive oil and a sea salt gelato. Unlikely as it may sound, the combination works. Nutella cookies sandwich the decadent hazelnut confection in between chocolate wafers studded with sea salt. For those who like sweeter dishes, the panna cotta served with a topping of mixed tropical fruits is a good choice, although even this dish is not particularly sweet.

Given Isabella’s celebrity status on both the D.C. and national food scene, it’s not surprising that Graffiato has been doing well since it opened. Even early on a weekday night, tables are full and even bar space is hard to come by. It’s best to book well in advance to avoid waiting. In this case though, the hype that is so often showered on new restaurants in D.C. is justified. Isabella is doing something special here. On a recent visit, it seemed that nothing could be better than the dish you just tried, until the next one came along. The consistency and quality in such a new establishment is unusual and commendable.

Graffiato is not out to be a fine dining experience, so dress is casual, as is the service, but in a good way. What Isabella is striving for is good and interesting food. And he succeeds. But with excellence comes price, and Graffiato is not inexpensive. A small plate-based operation, the portions are not large and the menu is so tempting that it’s easy to try many more dishes that you’d originally intended.

Chinatown continues to mature from the Verizon Center-supported chains that dominated this destination spot when it embarked on its first wave of redevelopment. Diners now have the opportunity to sample truly creative work by talented chefs like Isabella who have chosen to use their celebrity to set up shop in this area. It both tells you something about how far the D.C. dining scene has come and how much further it continues to go, because Graffiato undoubtedly will set a new standard for the area.