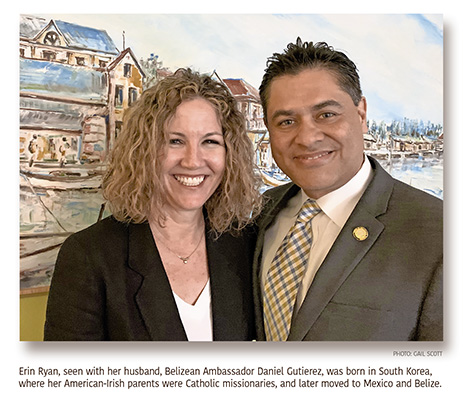 When you meet Erin Ryan, the wife of Belizean Ambassador Daniel Gutierez, you might assume she is an American. That’s partly true, but Ryan has international roots that overlap with her husband’s.

Her mother was from Syracuse, New York, and her father is Irish, from Birdhill in County Tipperary. But Ryan was born in South Korea, where her parents were Catholic missionaries. But she calls Belize her home.

“I attended my mother’s Montessori school for a few yeas in Mexico and lived in small Mayan village outside of Tizimín, Yucatán, for six years. I was 8 years old when we arrived in Belize on Sept. 29, 1981. Belize had just received its independence eight days earlier on Sept. 21,” Ryan told us. “My parents worked for the Catholic Church. In Belize, my mother taught English at a Catholic high school. In fact, she was Daniel’s teacher!”

Gutierez himself at one point worked in education as dean of the Sacred Heart Junior College in San Ignacio.

“We are a country of immigrants, except for the [indigenous] Maya,” said Gutierez, who is 30 percent Iberian and 70 percent Maya and who also serves as ambassador to the Organization of American States.

Despite its small size and a population of just over 360,000, Belize is rich in cultural and natural diversity. Home to several ancient Mayan city-states and even buccaneers during the Golden Age of Piracy, the country formally became the colony of British Honduras in 1862 until its independence in 1981.

Today, Gutierez proudly calls his homeland a multicultural country, with a mix of ethnicities, including Maya of with European descent (Mestizo); Creole; Maya; and Afro-Amerindian (Garifuna). The remaining population includes European, East Indian, Chinese, Middle Eastern and North American groups. In 1958, the Mennonites arrived from Europe; some of the Mennonites still drive their buggies.

“One of the hottest topics in America now is immigration. Like the U.S., we are also a country of immigrants,” Gutierez told us. “Belize is unique. It is the only English-speaking nation in the Caribbean and is one of the region’s most stable democracies…. It’s number-one trading partner is the United States,” he added. “You can be born to a poor family in Belize and make it in life.”

All of this has attracted some 30,000 Americans and Canadians to retire in Belize or buy second homes there. “You can purchase a luxurious home in Belize for one-third the price at home,” the ambassador said. “But we are more expensive than our neighbors, Guatemala, Mexico and El Salvador. Our money is stronger.”

In fact, director Francis Ford Coppola has resorts in Belize and actor Leonardo DiCaprio is opening a lavish eco-tourism resort there as well.

On that note, tourism is a major economic driver for Belize, which sits in between the jungles of Central America and the blue waters of the Caribbean. It also boasts unspoiled wildlife and a stunningly biodiverse barrier reef that was declared a UNESCO World Heritage Site in 1996.

“I love Belize — its natural resources and its human resources,” Ryan, a senior human resources manager, said. “It’s a beautiful, smaller country, which has tremendous potential. We can continue to develop more niche industries with the right corporate partners in agriculture, tourism and sustainable energy generation,” she added.

“For instance, Belize has improved its garbage collection and processing centers to a degree that it can now consolidate garbage for power production,” she explained. “At the moment, almost 100 percent of the electricity produced in Belize is renewable.”

As of April, all single-use plastic and Styrofoam will be banned. Belize also undertook the bold decision to indefinitely end all new oil exploration in Belize’s waters to protect its barrier reef, which is one of the largest in the world. The moratorium marks the first time any developing country has ceased oil exploration and extraction to protect its oceans.

The country’s natural attributes are a big plus, but there are downsides as well. Because of its proximity to Mexico and rugged landscape, powerful drug cartels use the country as a transit point to ship drugs to the U.S. Human trafficking is also a major problem.
The ambassador noted that according to Southcom’s Joint Interagency Task Force, “Nicaragua is the place in Central America that has the least amount of drugs moving through. Belize is second least. If we use this measurement, Belize is way ahead of most [countries] in the movement of drugs. However, Belize is desirous of doing even more.
“Our prime minister has announced, and now enacted, a major change in the hierarchy of the national police, and has decided to provide more and improved training, equipment and resources,” Gutierez said. “This is needed, as the movement of drugs toward the United States has exacerbated the inter-urban violence in the whole Central American region. The gangs in the inner cities of El Salvador, Guatemala, Honduras, etc., all feed off the drug trans-shipment economy. Hence, if we lessen that scourge, it should lessen the inter-urban violence in the whole region, not excluding Belize.”

For Ryan, the world of diplomacy and promoting Belize marks an exciting new chapter in her life. After graduating with a master’s degree in social sciences, she worked for 11 years as a human resources and administration manager for Belize Natural Energy.
“I never thought I’d be involved in diplomacy in Washington. I didn’t expect to be here, doing this. I try to keep an open mind…. I’m learning so much,” she said, admitting that she misses her full-time work but keeps busy as an independent consultant. She noted, however, that, “I don’t go to many evening events so I can be home with Adrian and Andrea; I try to be very selective.”
Their teenage children, Andrea, 17, and Adrian, 14, have adapted well to the move. “It was hard for them at first but now they are enjoying meeting other children from all over the world,” Ryan said.
The teenagers are learning to ice skate here and both attend Thomas S. Wootton High School in Rockville, Md. Andrea is determined to go to medical school and become part of Doctors Without Borders. Adrian, meanwhile, is fascinated by archaeology.
“Interesting that that’s what I wanted to do,” Gutierez noted. “We have so many important archaeological sites in Belize.” Although they are new to the world of diplomacy in the nation’s capital, both Ryan and Gutierez had memorable trips to Washington when they were younger.

When Ryan was attending Saint Joseph’s University in Philadelphia in 1992, she was a member of her school’s crew team. “We came down for the Cherry Blossom Regatta on the Potomac. We didn’t have time to tour D.C., but I do remember the cherry blossoms and thinking how beautiful they looked,” she recalled. “At that time, I never considered that I might end up living here. The world of politics was the furthest thing from my mind. I was focused on graduating and going home to develop my country in whatever way I might best contribute.”

Meanwhile, Gutierez came to Washington when he was 14 years old for a 10-day leadership training conference with other Belizean youths. “I remember that we stayed at a hotel not far from the Russian Embassy. President George W. Bush was in office but the closest we got to the White House was the metal fence on the North Lawn. What impressed me most was the highly developed infrastructure in the United States. I knew then, as I know now, how important infrastructure is for development. [A]s a part of that trip I also went to Seattle. The sights and sounds of the Northwest remained with me more than anything else.”

The family also has taken many trips all over the United States. “Of course, we had to go to Disneyland,” said Gutierez. “But we’ve also been to New York, Philly, Utah and Aspen to see the snow. We went to Chicago to open the consulate there and to Niagara Falls over the Christmas-New Year’s break. I also had a conference in Oklahoma and one in Georgia. I loved it.”

Back in Belize, the couple enjoys living on a 100-acre family farm. “There are cattle and sheep but no horses,” said Ryan, whose father still lives there. “We were going out there three out of four Sundays and decided we’d love to live there instead.”

At the end of our interview, the ambassador only had more thing to add: “I am the luckiest man in the world to have this woman at my side.”

Ryan smiled, then laughed and shook her head. “Now you see why he is our PR man!”