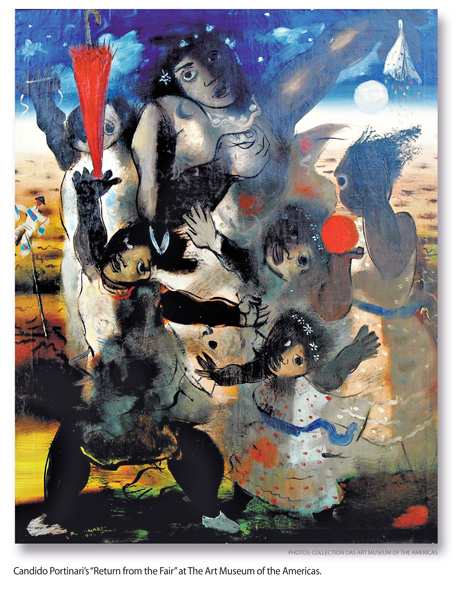 America’s oldest museum of Latin American and Caribbean art is one block down from DAR Constitution Hall and steps away from the National Mall. It has free admission like its Smithsonian neighbors, hosts traveling exhibitions, collaborates with embassies and features rotating displays of its permanent collection of more than 2,000 works. Yet somehow, it’s still flown under the radar of the D.C. museum scene.

But now, the Art Museum of the Americas (AMA) wants to be more than just a hidden gem.

In September, AMA released its first book in more than 30 years. The book catalogs 100 pieces in the museum’s permanent collection and is the centerpiece of AMA’s sustainability plan, an effort to expand the museum’s audience and public knowledge about the collection.

That collection started with one piece in 1949, a donated painting by Brazilian artist Candido Portinari, that kicked off an effort by the Organization of American States (OAS) to acquire a collection that reflected the contemporary art of its member states. The OAS opened the museum in 1976 to serve as a venue for cultural exchange among the nations of the Americas.

Since then, it has hosted countless exhibitions of modern and contemporary art from a range of countries, such as Belize, Chile, Colombia, the Dominican Republic, Uruguay and many others. Its current exhibit, “Human Landscapes,” highlights the varied and idiosyncratic aspects of Argentina’s geography through contemporary photography and video works.

Canada is also in the mix. Last month, AMA announced the donation of 150 pieces of art to commemorate the 150th anniversary of Canada’s confederation, making it the first large body of Canadian artwork to join the constantly expanding collection.

The first book to document pieces in the AMA collection was created under the leadership of art critic Marta Traba and published in 1985. Four years ago, Adriana Ospina, the current curator of the AMA’s permanent collection, set out to update it. 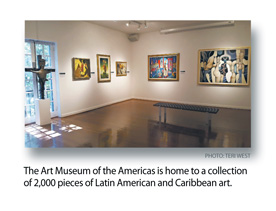 Ospina gathered a group of curators and scholars who had experience working with the permanent collection to tackle the project. She created a voting system among the group to select the pieces that would be included, and then participants chose particular works to research and write about.

They dove into the archives, mining through old clippings and documents to compile the stories behind the pieces. They reached out to artist estates and families and even discovered that they had mistitled a couple of the pieces in their records.

In honor of the publication of the book, the museum exhibited 72 of the documented pieces in a month-long exhibition this fall.

For decades, Cuban-born art critic José Gómez-Sicre was the driving force behind building up the AMA collection and bringing in fresh talent. He invited an array of young Latin American artists to host exhibitions at the museum, many of whom went on to have well-known careers throughout the region. 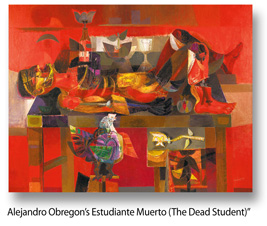 Pablo Zúñiga, director of the Art Museum of the Americas, recalled how Colombian artist Alejandro Obregón, then an unknown artist, held an exhibition at the AMA “and according to The Washington Post, it was a feeding frenzy,” he told us.

“People were jumping over each other trying to buy his art. So because of Gómez-Sicre, people from Latin America who had studied fine arts in Europe and then come to Latin America to become major artists, they had their first opportunity in the United States,” Zúñiga said.

Gómez-Sicre gradually began purchasing pieces and accumulating a collection, and the OAS provided him funding to do so beginning in 1957. The OAS continued to acquire art even after Gómez-Sicre retired but today does so through donations due to budget constraints.

The museum is a homey white building that was originally the home of the OAS secretary-general, with two floors of exhibitions. The top floor is now dedicated entirely to displays of the permanent collection. Walking through a single room, one might find both a photograph from Brazil and a lithograph from Mexico among an assortment of other artwork from around the hemisphere. The artistic styles may differ drastically, but they all feel complementary in the small space.

Another hidden treasure that many Washingtonians don’t know about is the basement tunnel that connects the OAS headquarters with its administrative building two blocks away. Here, art is front and center as well, with the tunnel walls decorated by a 200-yard long mural titled “Roots of Peace,” painted by the Uruguayan artist Carlos Páez Vilaró. The mural, which depicts various themes of peace and development in the Americas, is thought to be one of the longest murals in the world.

Zúñiga says the AMA is working to connect more with the local Latin community. Ospina does outreach to schools, and the museum is partnering with the D.C. Mayor’s Office on Latino Affairs to host events for young people.

They are also seeking a grant to digitize the new book and hope to publish more in the future.

Ospina said Latin American art is establishing a foothold across the world, from the Museum of Modern Art in New York to the Hirshhorn in D.C. to London’s Tate museum.

“The Tate just hired a young Latin American art curator, so the field is growing and is getting stronger and we in a way had the lead of what is happening,” Ospina said. “This book is really important to keep us visible in the field and to create some awareness of what we have.”

Teri West is an editorial assistant for The Washington Diplomat.