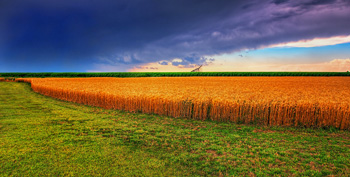 ABILENE, KANSAS — On a sweltering August night in the heart of Kansas, American patriotism, the allure of the Wild West and the nation’s skeptical views about its political leadership were on full display.

It was the opening night of the 71st annual Wild Bill Hickok Rodeo in Abilene, Kansas. Several hundred spectators filed into an outdoor arena. Announcer Mike Mathis galloped onto a dirt infield on a large brown horse and was later joined by Gizmo McCracken, a brightly colored clown with whom he would banter throughout the evening about animals, ranching, marriage, the greatness of America and the smallness of its politics.

Brooke Wallace, Miss Rodeo from Kansas State University, raced into the arena on her horse, brandishing an American flag and circling the stadium to vigorous applause. A man posing as Wild Bill Hickok entered on a horse, waved to the crowd and later returned on foot to shake hands and pose for photos. Geff Dawson, a cowboy poet, read a sampling of his work. Then the crowd stood, everyone removed their hats and listened to a prayer in which God was asked to protect the United States during a difficult time. Divine guidance was called upon for the nation as it confronts “changes and decisions” in the coming months. The national anthem followed.

Then several dozen cowboys and cowgirls, most in their 20s and from Midwestern states, competed in bull riding, saddle bronco riding, barrel racing and other rodeo events. Between contests, the announcer and the clown exchanged stories and quips. When a massive bull immediately tossed a cowboy, the announcer said it must have been a “Hillary bull.” And when the clown tried to explain something complex, counterintuitive and wrong-headed, he likened it to Obamacare. The crowd laughed.

But the mood in Abilene and across Kansas is not mirthful this political season. Surliness in the Sunflower State appears to echo the broader national mood. Polls have consistently shown that about two-thirds of Americans believe the country is headed in the wrong direction.

The extent of the American public’s frustration, even fury, at its political leadership has been well chronicled and frequently discussed. But a weeklong research and reporting trip to Kansas confirmed in spades how deep the discontent is in the American heartland. I visited Abilene to do research at the Dwight D. Eisenhower Presidential Library and Museum, but I also spent time talking to dozens of residents of this small, central Kansas town of about 7,000. I attended the rodeo, watched the Central Kansas Free Fair parade, had coffee with a dozen farmers at a local service station and met with others in restaurants and grocery stores.

“The political situation in this country is a joke,” said Kenny Kohman, a farmer from a small community south of Abilene. “Can you believe the choices we have for president? It’s a matter of choosing between the lesser of two evils. It’s totally embarrassing.” 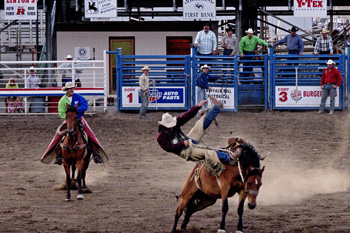 Saddle bronco riding is one of the staple events in a rodeo, common throughout the American Midwestern states.

Adrian Potter owns the Victorian Inn Bed & Breakfast in Abilene and strives mightily to keep the peace at the inn’s breakfast tables and common rooms. “I try to keep the conversation away from politics. I want my house to be a stress-free zone. There is so much anger, even hatred, out there. I don’t need it in my house,” she said.

Kansas is a state with about 2.9 million people. Dominated by the farm economy, its population is nearly 80 percent white, 11 percent Hispanic and 9 percent black. Kansas has been a reliably Republican state for decades and this is unlikely to change in November. In the 2012 presidential election, Republican candidate Mitt Romney won Kansas by almost 22 points over President Barack Obama. Four years earlier, the GOP presidential candidate, Sen. John McCain, defeated Obama by about 15 points in the state.

Kansas has a Republican governor, two Republican U.S. senators and all four of its U.S. House members are Republicans. In Kansas’s legislature, Republicans hold 32 of the 40 seats in the State Senate and 97 of the 125 seats in the Kansas House of Representatives.

But turmoil within Republican ranks in Kansas is roiling the political climate, with much of the discontent fueled by the aggressively conservative economic and social agenda of Gov. Sam Brownback. A former member of the U.S. House and Senate, Brownback was elected governor in 2010 by a huge margin and narrowly re-elected in 2014. Brownback pushed deep tax cuts through the state’s legislative assembly and paid for them through substantial spending cuts that have affected everything from schools to highways. The state’s credit rating has been downgraded several times during Brownback’s tenure.

In Kansas’s Aug. 2 primary (which was separate from the March presidential caucuses), nearly two dozen of Brownback’s allies in the state House and Senate were defeated. Analysts viewed this as a desire by Kansas’s GOP voters to return to their tradition of mainstream and Main Street Republicanism rather than Brownback’s self-described “real live experiment” in supply-side economics.

Kansas’s August primary grabbed the attention of Washington because Rep. Tim Huelskamp, a three-term, anti-establishment Republican incumbent from the first congressional district and a prominent member of the House Freedom Caucus, was decisively defeated by Roger Marshall, a doctor supported by agricultural interests and several business groups. In the race, which was largely seen as a proxy battle between hardline conservatives and more traditional Republicans, Marshall vowed to be a pragmatic conservative who would work cooperatively with Republican leaders in Congress. He also promised to tend to the state’s agricultural industry. Huelskamp voted against the House Republican leadership budget in 2012 and as a consequence was removed from the House Budget and Agriculture Committees by then-Speaker John Boehner. Huelskamp’s ousting from the agriculture panel was a key issue in his primary, as was his vote against the 2014 farm bill.

Charlie Smith, a minister at the First Presbyterian Church in Salina, which is about 20 miles west of Abilene, said the people of Kansas are frustrated by gridlock at the national level and the controversial leadership of Brownback at the local level.

“Kansas is an incubator that demonstrates to the rest of the country the pitfalls of buying into the ‘let’s elect an outsider and try something completely different’ idea,” he told us. “The backlash from the moderates, who I think are a majority of voters, has only been sparked because the theoretical is now palpably touching their lives, what with the whole mess over school funding.” 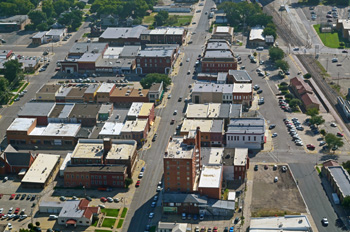 This aerial view shows the Kansas town of Abilene, whose population of roughly 7,000 has traditionally been a bastion of Republican support.

Burdett Loomis, a political science professor at the University of Kansas, agrees that the political frustration in Kansas is due to failures both in Washington and Topeka, the state capital.

“What’s notable in Kansas is that in a GOP primary election, Gov. Brownback and his far-right allies systematically got rolled by more traditional, moderate conservatives,” Loomis said. “The anger was directed largely at the fallout from income tax cuts, which have decimated state revenues and have necessitated cutbacks in education, roads, health care and mental health.”

Loomis said he believes the people of Kansas now want problem-solvers in government, not ideologues. “The overall mood is that things just are not working in a state where things have traditionally worked pretty well. It’s very heartening to see Kansas tilt back toward its moderate-conservative roots. But immense damage has been done over the past few years,” he said, citing the sharp decline in the quality of roads and schools in Kansas.

Chapman Rackaway, a political science professor at Fort Hays State University, agrees that discontent is alive in Kansas. “Anger and unrest are definitely in play. I think that anger goes well beyond the heartland, but it is particularly acute here,” he said. “The Kansas voter today is a bit of an unguided missile. They’re ready to strike but don’t have a consistent target. Six years ago, they thought moderates were the scourge of the land and they purged them with ruthless efficiency. Gov. Brownback mistook a successful pair of elections for a mandate, and in 2016 when his over-promised tax policy didn’t bear fruit, voters swung the ideological pendulum back to center. But there’s still anger.”

Michael Smith, a political science professor at Emporia State University, said political discontent in Kansas is a potent force, but is nothing new. “This is not the only time the Great Plains have seen anger and unrest. There has been anger and unrest before and now it’s back,” he said. “The overall political mood in Kansas is ‘throw the bums out.’ Obama is unpopular here and Gov. Brownback is even more unpopular. Poll respondents don’t mind same-sex marriage or transgender bathroom use so much, but they get angry at the thought of the Feds telling us what to do. The recent primaries were a backlash against cuts to public school funding and tax cuts that didn’t deliver promised growth,” he explained.

Smith predicted that boiling anger will hurt both Clinton and Trump in November. “Hillary and Trump are both unpopular. Kansas was one of Ross Perot’s best states. He got 20 percent here in 1992. There could be a similar result for Gary Johnson,” he said, referring to the Libertarian Party presidential candidate.

As unrest and discontent surge across Kansas, the Eisenhower Presidential Library seems a bastion of calm, order and nostalgia. The complex is nestled on a campus with large green lawns that resemble a small liberal arts college. Visitors stroll through Eisenhower’s former home, a museum, library and a “place of meditation” where Eisenhower, his wife Mamie and an infant son are buried. An 11-foot bronze statue of a proud but modest Gen. Eisenhower dominates the center of the campus.

On the second floor of the library, about 10 researchers from the U.S., the United Kingdom, Turkey, China and Japan sit at wooden tables and pour over the records of the Eisenhower presidency. Eisenhower governed during a difficult phase of the Cold War, from 1953 to 1961, as the U.S. battled the Soviet Union for global supremacy and competed for influence in Europe, Asia and the Middle East. Documents from that time illustrate the daunting foreign policy challenges Eisenhower faced while also confronting serious domestic apprehension that led to the so-called “Red Scare” and McCarthyism. Nonetheless, Eisenhower’s world sometimes feels more comprehensible than the current one.

“I can’t quite believe I’m saying this, but the 1950s seems like a much saner place than today,” quipped David Mayers, a visiting history professor from Boston University.

In the gift shop, tourists purchase souvenirs, many of which display the “I Like Ike” theme that Eisenhower used when he first ran for president in 1952 and also embraced when he won re-election in 1956. During these campaigns, Eisenhower had occasional biting exchanges with his Democratic predecessor, Harry Truman. At the front of the store, there is a blue bumper sticker that seems to reflect disappointment in the current political scene and longing for a more understandable past. It reads: “I MISS IKE! HELL, I EVEN MISS HARRY.”