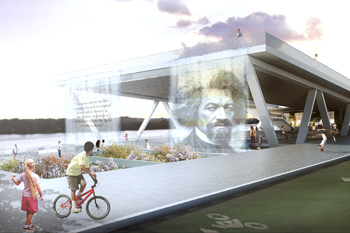 The United States is often referred to as a melting pot because of the mix of cultures and languages that coexist here. And in many ways, the nation’s capital exemplifies that amalgam. Sure, there’s the obvious variety of races and religions, but the story of America, of Washington, D.C., is told in subtler ways, too.

Like the faces of the people who inhabit the nation’s capital, the architecture of the buildings here reflects a history rooted in international relations.

“In a way, it’s sort of the distillation of America and in some ways it is very unlike any place else in America,” said G. Martin Moeller Jr., senior curator at the National Building Museum.

Foreign flair has touched D.C. from the start. Pierre Charles L’Enfant, a French-born architect, designed the city’s layout in 1791. He developed a Baroque plan with ceremonial spaces and grand radial avenues, resulting in the intersecting diagonal avenues superimposed over a grid that we know today, according to the National Park Service. “The avenues radiated from the two most significant building sites that were to be occupied by houses for Congress and the President,” NPS added.

But after clashes with government officials and city commissioners, L’Enfant was forced out and much of his vision never materialized. That is, until another pivotal shaper of Washington stepped in. At the turn of the 20th century, Sen. James McMillan orchestrated an effort, the McMillan Plan, to remove the train tracks crisscrossing Washington and replace them with what we know as the National Mall.

The design team responsible for the transformation had to do something first: “They convinced Sen. McMillan that in order to do their job properly, they needed to go spend five weeks in Europe,” Moeller said. “They did this incredible tour of the great capitals — Paris, Rome, Vienna, Budapest — taking notes on what worked and what didn’t, and brought back those European influences as they then started to work on the plan, which gave us, essentially, the Mall as we know it today and the monumental core as we know it today…. The green portion of the Mall, if you’ve ever been to Versailles, you understand exactly where that comes from.”

Indeed, a glance around D.C. reveals many foreign design influences. The neoclassical architecture of many government buildings, including the Capitol and the Lincoln and Jefferson memorials, was derived from Greek and Roman classical architecture, said Mary Fitch, executive director of the Washington Chapter of the American Institute of Architects (AIA).

“The winner of the original design competition for the White House was James Hoban, an Irish architect who immigrated to the United States after the Revolutionary War,” she added. “And of course, the Washington Monument is based on the design of Egyptian obelisks.”

Additionally, although it was designed by an American, the main entryway arch at Union Station, for instance, is based on Roman arches, and the building’s expansive interior is modeled after the great spaces of ancient Roman baths.

Foreign-born designers and influence decreased somewhat in the 20th century, thanks to the Depression, World War II and the Cold War. Work largely shifted to American architects. Today, there’s again an uptick in international flavor, Moeller said. For example, Spain’s Rafael Moneo designed the Spanish ambassador’s residence about 18 years ago. “It’s clearly inspired by the vernacular architecture of Spain,” Moeller said. “It picks up on the masonry of Spain, even going back to the Moors.”

In 2010, Vancouver-based Bing Thom Architects spearheaded the Mead Center for American Theater at Arena Stage, doubling the facility’s size. The next year, Moshe Safdie, an Israeli-born architect with offices there, in Canada and the United States, designed the U.S. Institute of Peace. Currently, Foster + Partners, a British architecture firm, is responsible for several buildings at CityCenterDC.

Let’s take a closer look at some other recent projects handled by international design firms:

David Adjaye, who was born in Tanzania to Ghanaian parents and whose offices are based out of London and New York, won a design competition in 2009 for this new Smithsonian museum that’s slated to open in 2016. The vision, according to Freelon Adjaye Bond/SmithGroup, was derived from a tripartite column and the Yoruba (a culture found primarily in West Africa) idea of a column or wooden post capped by a crown-like form, according to the description the firm gives on the museum’s website. The bronze-clad corona will stretch skyward and inside the building it forms a perimeter to the galleries through which daylight will pass.

“My design is about celebrating the contributions that African Americans have made to the United States and through that, telling a story about how a migration of a people has infused American culture with an African sensibility,” Adjaye told us via email.

His choice of materials also brings the narrative he’s trying to describe to life. Bronze panels will reference the history of post-war black ironworkers, while the form of the building evokes West African art, Adjaye said. “There are also very clear references to the materiality of the Washington Monument. The design is very much about the layering of these different conditions.”

Overall, he hopes that visitors to the museum, or at least admirers of its design, feel uplifted.

“The form of the building suggests a very upward mobility,” he said. “It’s a ziggurat that moves upward into the sky, rather than downward into the ground. When you see this building, the opaque parts look like they’re being levitated above this light space, and when you look at the circulation, everything lifts you up into the light. I want people to see that this is not a story about past trauma. It’s not a story of a people that were taken down, but actually one about a people that overcame and transformed an entire superpower into what it is today. The sacrifices of the African American people has made America better.”

A Dutch architecture firm called OMA (Office for Metropolitan Architecture) was chosen to design the $40 million park along with Olin, a Philadelphia-based landscape architecture company. The joint public-private venture is still in the planning and fundraising stages right now; it could open, at the earliest, at the end of 2018. The design calls for an X-shaped span that’s home to a central plaza, an environmental center, an amphitheater, picnic spots, waterfalls and more. There’s even a series of nets that allow people to dangle over the river. But what’s especially interesting is how two trusses will sit atop the existing piers to elevate the new civic space, said Scott Kratz, director for the park project.

“One of the goals that most viscerally connects with the public is that this is a physical bridge but also a metaphorical bridge, encouraging the residents from both sides of the river to travel to the adjacent neighborhoods that have long been divided by the Anacostia River,” Kratz told us. “We also see this as a bridge between countries.”

Although Washington was founded specifically because it sits at the confluence of the Anacostia and Potomac rivers, the city has long forsaken the waterways, he said. There’s a lot to learn from other river-based capitals such as London and Paris that are re-engaging with their central feature. For example, Paris built a beach area, the Paris Plages, along the Seine a couple of years ago.

For years, the Anacostia River was more known for pollution and poverty than parks and playgrounds. The ambitious 11th Street Bridge project aims to change that by transforming perceptions of the neglected river. That interaction with water was one of the 13 design principles OMA addressed in the Dutch firm’s winning approach — not surprising given that the flood-prone Netherlands has developed one of the best water-management systems in the world.

“It’s my understanding that the Dutch have been thinking an awful lot about water, how to keep water out but also how to live with it,” Kratz said. “They actually went so far as to create ways to make sure that we are physically cleaning the water because water plays a critical role.”

To that end, the park will include a series of waterfalls beneath the bridge to re-oxygenate the water to support marine ecosystems, for instance.

The Dutch are designing another major city project. The Mecanoo design firm is handling the renovation of Martin Luther King Jr. Memorial Library on 9th and G Streets. The plan is to retain the original modernist layout while transforming the main entrance and adjacent cores “into focal points to make them more vertical, transparent, allowing more daylight and visibility to these public cores,” Francine Houben, creative director and architect at Mecanoo, told us in an e-mail. “The result is a modern library that reflects a focus on people, celebrating the exchange of knowledge, ideas and culture.”

A stone’s throw from Washington, yet another Dutch team — Tejo Remy and René Veenhuizen — are working to improve a portion of a fence that surrounds the Water Pollution Control Plant in Arlington, Va. The section they were selected by Arlington Public Art to work on in March 2012 measures 800 feet and runs parallel to a bike and pedestrian trail along the Four Mile Run stream. The effort is part of a larger initiative called the Four Mile Run Restoration Project, an inter-jurisdictional project involving Arlington, the Army Corps of Engineers and the city of Alexandria to restore the streambed.

The designers were inspired by the workings of the plant and by the water, said Deirdre Ehlen, Arlington Public Art project manager — “this change of taking the dirty water, cleaning it and then putting it back into the river, and that process is done through a very natural process using microorganisms. Tejo and René took that idea of microorganisms and what they look like under a microscope,” she explained, noting that they also incorporated tools such as hand wheels and screwdrivers that are involved in water maintenance.

“There’s going to be an abstract pattern that’s going to be created two different ways,” added Angela Adams, Arlington Public Art administrator. “One through the overlay of shaped fence — a dimensional fence that will be made out of the same material that will be added to the fence itself, so it will give a sense of volume, and as you move along it, there will be a bit of a moray effect … in that it will look like it’s in motion. The other design will be created through these waves of colorful widgets.”

The Arlington Public Art program sent a call out nationally for design entries, and a local gallery that represents Tejo and René applied on their behalf, Adams said. About half the art in the program’s collection comes from local or regional artists, and most international contributions come through a sister-city exchange program.

Washington is not the only major city or capital to have well-recognized buildings that were designed by architects who hail from other countries, said AIA’s Fitch. Some examples include the Shard skyscraper in London, the tallest building in the European Union, which was designed by Renzo Piano of Italy, as well as three skyscrapers in Shanghai’s central Pudong district — the Jin Mao Tower, the Shanghai World Financial Center and the Shanghai Tower (the second tallest building in the world) — that were designed by U.S. firms.

“In our age of globalization, the use of foreign architects is a worldwide phenomenon, particularly for major commercial buildings or marquee cultural projects,” Fitch said.