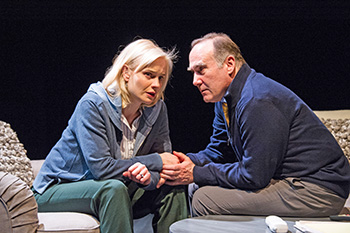 At left, Hannah Yelland stars as CIA operative Valerie Plame and Lawrence Redmond as her husband Joseph Wilson in “Intelligence.”

“Intelligence,” a political thriller at Arena Stage based on true-life events, is bittersweet. It’s encouraging that playwright Jacqueline E. Lawton courageously exposes an embarrassingly painful part of U.S. history. Yet it makes one wonder: Why does it take years for Americans to realize costly mistakes made by our leaders, and why haven’t we learned from those mistakes?

In what feels like an agonizing omen of the current administration’s suspected cover-ups, Lawton gives us the behind-the-scenes drama of George W. Bush administration’s outing of former covert CIA operative Valerie Plame, who happened to be married to a key critic of the Iraq War.

“Intelligence,” directed by Daniella Topol, is the third in Arena’s Power Plays, an initiative to commission 25 new plays or musicals from 25 writers over the next 10 years. The massive undertaking features one story per decade from 1776 to the present that explores politics and power in America. Arena audiences have already experienced Lawrence Wright’s “Camp David,” about the 1978 Mideast peace accords between Egypt and Israel, and John Strand’s “The Originalist,” about a conservative Supreme Court justice and his liberal law clerk.

Set in the theater’s intimate Kogod Cradle, “Intelligence” takes place from January to August 2003 and chronicles the fall of the World Trade Center during 9/11, the Bush White House’s fixation with Saddam Hussein’s alleged weapons of mass destruction, the start of the Iraqi War and eventually the inevitable demise of Plame’s career.

Deputy Secretary of State Richard Armitage revealed Plame’s identity to the press after her husband, former diplomat Joseph Wilson, wrote a New York Times op-ed refuting Bush’s claims that Hussein purchased nuclear weapons-grade uranium in Niger. The article contested the government’s rationale for the 2003 Iraqi invasion and Plame’s exposure was seen as an attempt by the administration to silence a detractor.

Wait, that rings a bell. “Fake news” anyone? 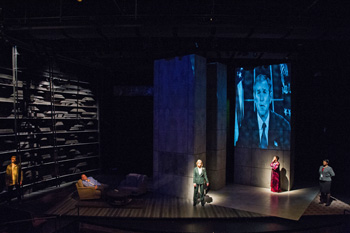 At a time when many U.S. citizens are questioning President Trump’s intentions and loyalties, “Intelligence” serves as a stark reminder of the current chaotic political maelstrom.

“It is a critical time to consider the motives of those who hold political power, and what an individual can do — or is forced to do — to fight for justice,” wrote Arena Stage Artistic Director Molly Smith.

The 90-minute script, with no intermission, flies by as Plame struggles to follow CIA orders and wrestles with her conscience. The play’s staccato style and chaotic use of lighting and sound add to its drama and suspense, even if one already knows the outcome.

A series of short, decidedly charged vignettes march the plot forward as we witness Plame, portrayed adeptly by Hannah Yelland, maneuver between taking CIA orders, arguing with her husband over his conflicts of interest with her job, traveling overseas to ensure Iraq doesn’t acquire nuclear weapons and dealing with the untimely end of her high-powered career.

Misha Kachman’s set is eerily stark, with foreboding lighting and shadows by lighting designer Kathy Perkins. Three mammoth, concrete pillars serve as visual and emotional symbols of the divisiveness of the play’s events, as mini scenes unfold between them. Larger-than-life television images — frenzied, loud and terrifying — of the collapse of the World Trade Center buildings, Bush’s 2003 State of the Union address and the war in Iraq are projected on the giant slabs, as the Wilsons and the audience look on in horror. 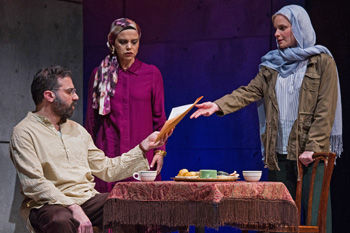 Yelland is seen with her assets, played by Ethan Hova and Nora Achrati.

Although the script feels a bit clipped at times due to the rapid-fire scene changes and course of events, the actors deliver their lines with enough pathos to bring us back to the charged emotions of that period in America’s history. Lawrence Redmond, as a self-righteous and misunderstand Joseph Wilson, understandably yearns for time with his overwrought wife who works — from his perspective — for an immoral force. Ethan Hova, as Dr. Malik Nazari, and Nora Achrati, as his niece Leyla, skillfully portray Plame’s “assets,” Jordanians targeted by the CIA as vehicles of information about Hussein. These two also give us a chilling look at what it was like to be the “other” in post-9/11 America.

The audience feels as helpless as the characters are on stage, as the destruction of their lives and Iraq unfold. Plame repeatedly asserts that the “war is inevitable,” even as she admits to the administration’s lies. The tension is palpable in this pseudo thriller-drama.

“Intelligence” rips the Band Aid off old wounds and pokes at new ones. As current news mirrors the past, we cannot help but find irony in the fact that where there is supposed to be intelligence, we often find quite the opposite.