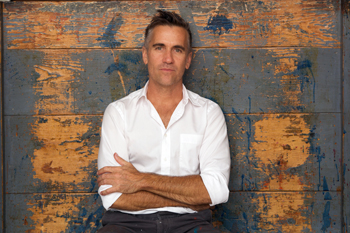 Artist Darren Waterston called it an “extraordinary experience” born out of an intense collaboration. His immersive work, “Filthy Lucre,” a reimagining of James McNeill Whistler’s iconic “Peacock Room” now on display at the Arthur M. Sackler Gallery, is a decadent, pointed commentary about the collision of art and power, and the creative yet destructive forces it unleashes.

The American-born, British-based Whistler painted the intricately decorated paneled Peacock Room, also known as “Harmony in Blue and Gold,” from 1876 to 1877. It belonged to Whistler’s patron, Frederick R. Leyland, a wealthy ship magnate from Liverpool, England.

According to the Freer Gallery of Art, where the Peacock Room now resides, Whistler turned what had been a small consulting job into a full-blown overhaul while his patron was away for the summer. Among other things, Whistler covered the room in a stunning palette of blues, greens and golf leaf patterns reminiscent of a peacock’s plumage.

Today, the Peacock Room is considered one of the most majestic examples of the Anglo-Japanese style and one of the greatest surviving aesthetic interiors. Despite the room’s visual grandeur, however, its owner was none too pleased with the dramatic transformation Whistler had initiated (the painter even entertained visitors and journalists in the room without Leyland’s permission).

Leyland refused to pay Whistler for the changes, giving him half of his demanded pay. In turn, Whistler gained access to Leyland’s home and painted a pair of fighting peacocks to represent the quarrel between him and his former patron. 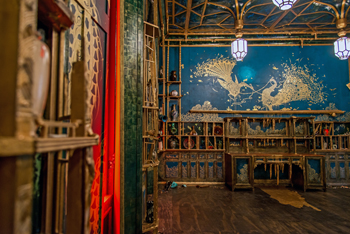 In Waterston’s version, those fighting peacocks have turned gruesomely violent, one of the many jarring images in “Filthy Lucre.” Against an eerie dim glow and soundscape by the band BETTY, the room appears to buckle under the weight of its acrimonious history.

Waterston, who has been exhibiting work in the U.S. and abroad since the early 1990s and is used to solitary studio shows, created “Filthy Lucre” with “many loving hands.” Waterston’s installation was created in collaboration with the Massachusetts Museum of Contemporary Art, or Mass MoCA.

In his research, the California-born, New York-based artist said he began thinking about all the great painted rooms in art history and the “Peacock Room” naturally came to mind.

“The more I read, the more I studied and realized it was a story that felt so fresh and contemporary, a room built during the Gilded Age with such credible prosperity and deprivation happening at the same time,” Waterston told us. “Everything felt like the contemporary art world I am in. I wished to re-imagine this as my own work of art and explore ideas behind the original room.”

Waterston said he had been influenced by Whistler since his early 20s and had always greatly admired his work. “As a painter, I often looked at his nocturnes and paintings that really bordered in pictorial space and pure abstraction,” he explained. “I was less interested in figurative work and more interested in the depiction of space as in landscape space, and particularly paintings that have to do with twilight and nighttime.” 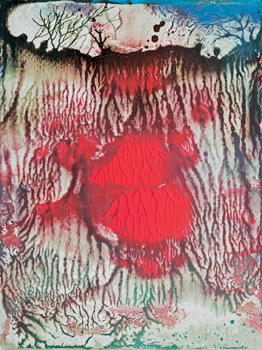 Waterston’s creative process for “Filthy Lucre” — his first collaboration with the Smithsonian — was immersive and relentless. Fatigue set in as he created the exhibition in the Northern Berkshire District on the Massachusetts border with Vermont.

“The winter was brutal,” Waterston said. Along with his colleagues, Waterston worked in a Civil War-era stone building that was part of the Mass MoCA campus. There were times when the paint seemed to nearly freeze. The somber working environment was heightened by the piece’s serious themes: “the complicated tensions between art and money, ego and patronage and acts of creative expression in the 19th century and today,” according to the Sackler Gallery.

The best advice Waterston gives to artists at any stage of their career is to “always push to work outside of your comfort zone and find ways of expression that are maybe not so safe.”

“Filthy Lucre” is the centerpiece of “Peacock Room REMIX,” an exhibition that examines Whistler’s relationship, and eventual fallout, with Leyland. It features a changing series of installations, beginning with Whistler’s portraits of the Leyland family and Waterston’s preparatory studies for “Filthy Lucre.” A second phase in 2016, “The Lost Symphony: Whistler and the Perfection of Art,” highlights the history of a painting Leyland commissioned for the Peacock Room but Whistler never completed, while the 2017 display “Chinamania” explores the enduring fascination with Chinese blue-and-white porcelain.

The opening of “Filthy Lucre” was celebrated in May with the Sackler’s Birds of a Feather Gala, where Waterston was in attendance along with actress Gillian Anderson (see photos in the Spotlight section).