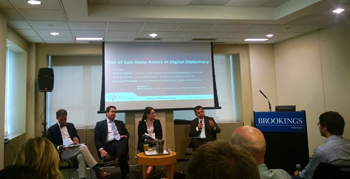 When riots erupted in Belfast during the annual Twelfth parades in July 2013, the Northern Ireland Bureau found itself in the midst of a conundrum: how could it remain politically neutral, while countering the damage that the images could have not only on Northern Ireland’s ongoing and sometimes fragile peace process, but on efforts to establish it as a safe place for both investors and tourists?

Bronagh Finnegan, public affairs and outreach officer for the Northern Ireland Bureau, second from right, participates in a Digital Diplomacy Coalition panel on the rise of sub-state actors in digital diplomacy at the Brookings Institution.

The Twelfth is an annual holiday celebrated by the territory’s British Protestant majority that commemorates a 17th-century military victory over their Irish Catholic foes. Clashes during the annual pro-Protestant parade, which winds through heavily Catholic areas, are not uncommon — a reflection of the lingering sectarian tensions that simmer in Northern Ireland.

The Northern Ireland Bureau’s social media efforts had begun somewhat halfheartedly in 2011 and then accelerated in 2012 with a more measured approach. It was just in time: In December 2012, a law changed how frequently Britain’s Union Jack would fly over government buildings, leading to widespread protests in Northern Ireland, which is part of the United Kingdom.

Bronagh Finnegan is the public affairs and outreach officer at the bureau and serves as the lead of a joint effort to formulate strategy and feed content from both the D.C. office and partners in New York. She says the immediate nature of platforms like Twitter and Facebook can be a double-edged sword in instances like protests and riots.

“It’s important for us, because obviously with Twitter and Facebook being sort of instantaneous, to counteract those images in real time as opposed to drafting a press release, getting it approved, then sending out when the stories have already been circulating for ages,” she said. “It’s still a relatively new concept, and it is still a little bit scary for our government because it’s not as controlled as what we’re used to.”

During the riots, the bureau contributed heavily to the hashtag #PositiveNI, a viral campaign that had users around the world tweeting photos of their favorite places, upbeat news and fond memories of Northern Ireland. The bureau is limited by what it can post, as many diplomatic missions are, but Finnegan says that hasn’t hampered its outreach.

“It would be counterproductive for us if there were issues at home and we just went quiet. That’s not what we’re here to do,” she said. “Oftentimes when we don’t have an official line on things, because it’s a contentious issue at home, we definitely bombard our accounts with more positive information on Northern Ireland about investment, tourism or involvement in our peace process. We definitely try to blast those out on social media because it’s important to us. We can’t just step back and do nothing.”

Despite the sensitivity over controversial issues, Finnegan says the staff has never accidentally crossed a line and sparked their own uproar.

“It’s never happened, which I’m particularly proud of. I think we’re all very aware of our role here and who we represent, so we’re all in tune with what we can and cannot do,” she said. “We also have a strategy so there are certain checks and balances within our social media stuff, and what we’ll post and what we won’t, and we all understand that, so that helps in navigating our various issues.” 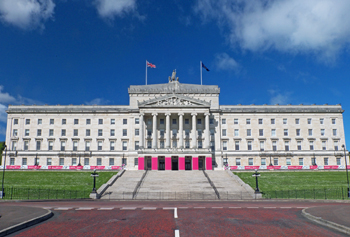 The Stormont Parliament Buildings in Belfast are the seat of the Northern Ireland Assembly.

While the Northern Ireland Bureau can’t take a political stance on delicate issues like disputes with Britain, its role is to manage the reputation of Northern Ireland in North America. It would have been tempting to simply let the British Embassy steer the social media direction for Northern Ireland, but Finnegan said the two entities have very different jobs.

“The U.K. staff is very, very good at social media. And they are our colleagues, so we definitely sit down with them and ask their best practices,” Finnegan said. “But for the most part, we are fairly separate.”

More than 15 years after the Good Friday peace agreement was reached to end the decades-long Troubles, Finnegan said Northern Ireland is focused on looking forward, and it sees the Irish diaspora as a vital part of that process.

“We realized there were a lot of Irish Americans and they’re really interested in Northern Ireland, but at the same time, they’d really focus on a Northern Ireland that many people know as not quite as accurate as what we’d like it to be,” Finnegan said. “They were really focusing on the past, and not really promoting the image that we wanted to promote, which is that Northern Ireland is a modern, innovative, outwardly-looking region.”

She said Northern Ireland has a unique position, not only on the global stage, but within the digital sphere. “In all aspects of Northern Ireland and what we do here, we really punch above our weight in a bit of a way, and our social media accounts demonstrate that,” she told us.

“In another sense, we are sort of peculiar in the fact that we are part of the British Embassy, and they have a huge social media presence and they’re very, very good at it,” Finnegan added. “But we are carving out our own little way and that’s something that we’re proud of.”

Note: As of July 1, Bronagh Finnegan accepted a position as a financial engineer with First Derivatives and has returned to Belfast.

Molly McCluskey (@MollyEMcCluskey) is a contributing writer for The Washington Diplomat and has covered Northern Ireland for a variety of publications. She is currently in Belfast covering the Twelfth parades and the ongoing peace process.