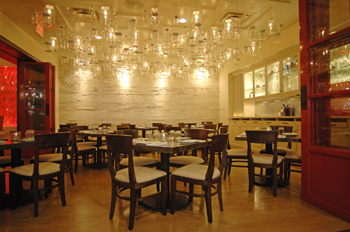 The mere phrase “summer in Washington” tends to elicit groans and grumbles accompanied by mental images of high temperatures and hellish humidity.

But thankfully, the Washington region’s steamy summers do offer a significant upside: restaurant menus packed with locally sourced fruits, vegetables and seafood that thrive in the region’s verdant climate and myriad waterways. No matter what type of cuisine one is craving — from American to Asian to Eastern European and beyond — chances are good that an area chef is serving it up using fresh, local ingredients.

This month, let’s globetrot to three different area restaurants that showcase summer in all its culinary glory. And since it is July, when that most American of holidays known as the Fourth of July occurs, we’ll start close to home with American cuisine, followed by French and Italian.

Lincoln, a sleek, bustling but unfussy eatery in the heart of downtown Washington whose namesake pays homage to one of America’s most beloved presidents, is boasting a seasonal menu that practically screams summer.

Lincoln’s executive chef, Demetrio Zavala, has crafted an intensely local menu that focuses on small plates and uses fresh ingredients supplied by local farmers, daily seafood catches by area fishermen and artisanal meat from ranchers around the region. Zavala buys produce from Gorman Farm in Maryland and dairy from Trickling Springs Creamery in Pennsylvania, among other regional purveyors. Zavala also complements the restaurant’s playful side (check out the gleaming floor covered in copper pennies) by including nods to some of the former president’s favorite foods, including oysters, gingerbread and chicken fricassee.

We started with edamame hummus and pickled vegetables. A generous portion of vibrant, green hummus arrived with crisp pickles and beautiful red radishes. Flavorful and light, it was the perfect summer starter. The Maryland hush puppies were another delicious all-American prelude with lump Maryland crab mixed into the breading. The delectable fried orbs of dough were drizzled with salsa verde and a light, tangy green goddess dressing. A half-dozen Maryland Choptank raw oysters — a solid deal at $12 — also hit the spot. Not too small and not too plump, the oysters offered a cool contrast to the warm hush puppies, and the briny flavor whet our appetite for the main courses.

Lincoln’s lamb Bolognese — braised lamb shoulder with carrot puree, mint potato gnocchi, celery carrot, onion, tomatoes and lemon ricotta — wasn’t quite as impressive as it sounded. The flavors all came together nicely, but the dish itself was something of a mush. But the DC Brau Porter lemongrass shortrib with goat cheese leek grits and apricot horseradish mostarda was tender, delicious and filling.

The eye-catching interior design includes original art by iconic American pop artists, but now might be a good time to check out Lincoln’s outdoor patio. The restaurant is also hosting a special “Independence Day with Lincoln” event on July 4th featuring a seasonal farm-to-table menu for $35 a person.

Across the Potomac River in Alexandria, Va., the newly reopened Bastille, serving modern French cuisine, has launched an inaugural summer menu in its new location at 606 North Fayette Street. Chefs Christophe and Michelle Poteaux have taken full advantage of a warmer than usual spring season, which provided a bounty of fresh vegetables.

Inspired by France’s Mediterranean coast, Bastille’s menu is bursting with heirloom and cherry tomatoes, sweet corn and green beans, or “haricots vert” if you’re up on your French. Peaches add a punch of tart sweetness to a seared foie gras with honey reduction blended with Banyuls dessert wine on spice bread.

The salmon fillet with oven-roasted tomato, corn risotto and a basil coulis is a satisfying summer meal, or if you’re hungrier, the thick-cut “cote de porc,” a pork chop from Maryland’s Eastern Shore, is accompanied by a zesty barbecue mole sauce, fresh summer beans and corn succotash.

Michelle Poteaux, a three-time RAMMY award nominee for pastry chef, is also in on the summer act at Bastille with her “summer melon,” a refreshing final course comprised of compressed cantaloupe, Greek yogurt sorbet, sesame crunch and mint puree.

Finally, if you’re in the mood for summery Italian food, there are few better options, especially on a Sunday night, than Casa Luca, Fabio Trabocchi’s rustic, well-respected osteria focusing on the Marche region of Italy. Executive chef Erin Clarke and sommelier Sarah Bengtson have created a three-course tasting menu available each Sunday for the reasonable price of $48 per person. The menu highlights the cuisine and wines of Italy’s distinctive regions, with a menu tailored to a different region or grape varietal each month. Clarke, like many of Washington’s best chefs, is also proud of her commitment to locally sourced ingredients when possible, although she also imports from Italy when necessary. 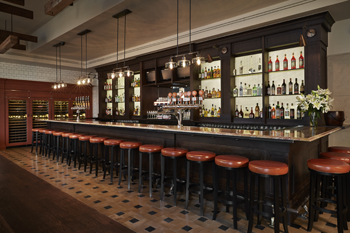 This summer, Casa Luca has created a three-course tasting menu on Sundays based on a different region of Italy each month.

Apparently, word has gotten out. When we visited Casa Luca on a Sunday in early June, the attractively chic but warm dining room was filling up fast. Luckily, our table was reserved and the focus for June was the southern Italian island of Sardinia, the second-largest island in the Mediterranean Sea after Sicily.

For our first course, we had Insalata di Ricotta Salata and Pane Carasau, or arugula with pickled red onion, black walnuts, ricotta sheep’s milk cheese and crispy Sardinian flatbread. The colorful, flavorful salad was complemented nicely by a 2013 Argiolas “Costamolino” Vermentino, a nice, light white with accents of tropical fruit and honey.

Next, our server delivered Spaghittus cun Cancioffa, or house-made saffron spaghetti with baby artichokes, melted onions and small cubes of dry-cured pork loin. The thin pasta was light on the palate and the fresh artichoke further enlivened the summery flavor of the dish. This time, a dry but robust red wine called Sella e Mosca “Cannonau” Riserva from 2010 accompanied the course — another winner.

A third course of Fregula Sarda, or toasted semolina couscous, dorade fish, middleneck clams, slow-roasted tomato and spicy shellfish brodetto was clean, flavorful and filling. A 2007 Cantina di Santadi “Shardana” Carignano — reportedly one of the most in-demand wines in Sardinia — had intense flavors of black fruit and plum and, again, made a perfect accompaniment.

We’re told that in July, Casa Luca will be featuring a Summer Sips menu based on that most summery of wines — rosé — and different regions of Italy that produce excellent variations of the popular wine. If June was any indication, Casa Luca’s guests should be in for a treat.