Home The Washington Diplomat December 2011 Baby Blues: Is It Safe to Take Antidepressants While Pregnant? 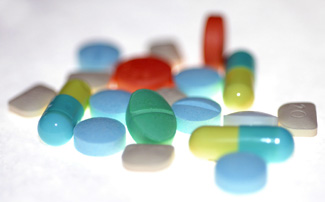 We adopted our oldest daughter, who’s now a brilliant and charming 5-year-old, in a domestic adoption at birth. And one of the things we knew, or thought we knew, from the start was that she would have to be in the neonatal intensive care unit (NICU) — or at least something a little less intense called the “step-down unit” — for a short while right after she was born.

She wasn’t a preemie, nor had she been diagnosed in utero with a heart condition or any other kind of medical problem. But her birth mom was taking a couple of prescribed medications designed to help her manage depression and anxiety. Doggedly, she had tapered herself down to the lowest dose she could take, but the medications were pretty essential to her well being and it wasn’t wise for her to go off them entirely. Her doctor had assured her that the drugs were safe as far as the baby’s development went, but perinatologists expected that our daughter would be born with at least some dependence on them, and need to “withdraw” in the NICU.

That didn’t happen. With Apgar scores of 9 and 9, a solid weight of just over seven pounds, and a healthy eagerness to eat and cuddle, our daughter showed no signs of having ever been exposed to anything stronger than a prenatal vitamin. Not another word of the NICU was mentioned.

Like our daughter’s birth mom, around 13 percent of women take antidepressant medications during pregnancy, according to statistics from the American Psychiatric Association and American Congress of Obstetricians and Gynecologists. But despite some risks, the fact is that just like our daughter, most babies exposed to antidepressant medication in utero show no sign of being negatively affected by it.

It’s not that antidepressant use during pregnancy has no risks to the baby whatsoever. For example, some studies have found that two antidepressants (Prozac and Paxil) are associated with a small (about 1 percent) increased risk of heart defects in the baby when taken during pregnancy. Other studies suggest that taking Prozac, Paxil or Zoloft during the third trimester of pregnancy can increase the risk for a condition called persistent pulmonary hypertension, in which not enough oxygen reaches the baby’s bloodstream and breathing difficulties ensue. Other studies, though, show no such link.

Finally, taking medications close to the time of delivery can increase the risk of withdrawal symptoms, like jitteriness and irritability (the kind of thing we were warned to expect with our daughter). A recent study also suggested there may be an association between antidepressant use in pregnancy and autism.

But many of these studies establish association, not causation. That is, are women who take antidepressants during pregnancy slightly more likely to have babies who eventually develop autism because the medications cause autism, or is there some other factor involved that links prenatal depression and autism?

And what are the risks of not taking antidepressant medication that a woman genuinely needs? Doctors say there are many: She might end up self-medicating with drugs, alcohol or cigarettes, which could pose a much more serious threat to the baby. She might even be at higher risk for suicide — particularly for women who have been seriously depressed and possibly suicidal in the past, going off antidepressant medication can increase the risk of relapse. And untreated depression during pregnancy is also associated with low birth weight, preeclampsia and prematurity.

When our daughter was born, there actually were no guidelines to help her doctors walk her birth mom through the choices she was making about taking her antidepressant medication. That changed in August 2009, when the American Psychiatric Association and American Congress of Obstetricians and Gynecologists issued joint treatment recommendations for depression during pregnancy.

Among other things, they said: Women on medications whose symptoms have been mild or almost nonexistent for six months or more may want to consider tapering and discontinuing their meds before getting pregnant; women with a history of severe, recurrent depression or other psychiatric illnesses probably should not discontinue their medications to get pregnant; women who want to stay on medication may be able to do so after talking about the risks and benefits with their psychiatrist and ob-gyn; and women with severe depression should stay on medication if they become pregnant, and if they insist on stopping, their doctors should find alternative treatment options before they stop taking meds.

There are no simple answers when it comes to treating depression during pregnancy, but if experts can’t find a precise formula for what the risks of antidepressant medication are, or how they should be weighed, they all seem to agree on one thing: Depression during pregnancy should not be left untreated. Unfortunately, all too often it is. Studies have found that pregnant women who have been taking medication for depression will often deny that they are depressed once they become pregnant, and stop taking their medication without consulting their doctors or seeking additional support.

I was deeply anxious about how the antidepressants our daughter’s birth mom took might affect her once she was born. But I also knew that the risks they both faced if this smart, thoughtful, but struggling young woman went off her medication were even higher. Looking back now, I’m impressed with the wisdom and caution of the decision she made, and with the careful guidance her doctors offered her. (Of course, my perspective is no doubt biased by the fact that our daughter wound up with no health problems whatsoever.)

All too often, when a woman is pregnant, we think that everything about her health and well being should be secondary to that of the baby she is carrying. But the fact is that you can’t separate the two. A woman throwing aside needed medications in a yeomanlike effort to “tough it out” for her baby isn’t necessarily doing herself or her baby any favors. The best thing you can do to take care of your baby is to take care of yourself — and sometimes, that might mean deciding that the potential risk of antidepressant medications is less than the potential risk of going without them.