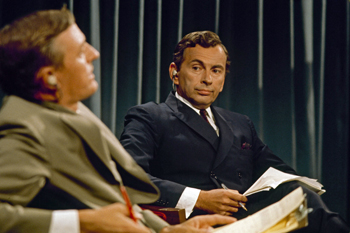 American directors Robert Gordon and Morgan Neville deserve to be proud of “Best of Enemies,” their first political documentary that turns out to be a first-rate commentary on the 1968 debates between two defining public intellectuals. Those live TV debates between liberal Gore Vidal and conservative William F. Buckley Jr. set the stage for the vitriolic media environment that marks public discourse today.

The directors (who earned a documentary Oscar nomination for “20 Feet from Stardom”) exceeded all expectations with “Best of Enemies,” transcending what seemed to be their relatively narrow filmmaking background, almost all of it in music documentaries. Amazing archival footage allows viewers to feel like they are watching the debates in 1968. Insightful interviews — notably of Christopher Hitchens — and a solid story structure complement the historic clips.

Conservative William F. Buckley Jr., above left, spars with liberal Gore Vidal (also seen below with actor Paul Newman) during a series of debates in 1968 that are the subject of the documentary “Best of Enemies.”

“Best of Enemies” provides a rare chance to witness the birth of a unique species: the television political pundit. In the summer of 1968, distant also-ran ABC was willing to take a new risk to shake up its perpetual status as a third-place broadcast television news network. At that time, network news was much more important in terms of ratings, advertising income and influence than in today’s media landscape fragmented by proliferation.

ABC hired conservative William F. Buckley Jr. and liberal Gore Vidal, both household names for expressing their strong political viewpoints — at opposite ends of the ideological spectrum. Despite their ideological differences, they shared some commonalities: celebrity as successful writers, patrician backgrounds, less than ideal education and failed runs for public office.

In lieu of traditional reporting, the dynamic duo debated each other on live television for each of 10 nights of the political party conventions. Outside, rioting took place in the sweltering August heat of Chicago during the Democratic National Convention, following the assassination of Martin Luther King Jr. and months of political turbulence. Inside, Vidal and Buckley’s verbal sparring was just as heated, trading barbs that ranged from Vidal calling Buckley a “crypto-Nazi” while the conservative fired back by labeling his leftist counterpart a “queer.” 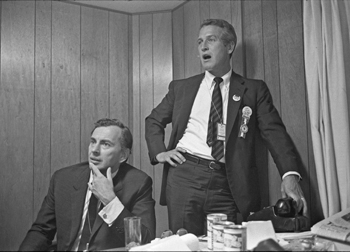 Their palpable animosity for each other spills onto the screen, where they launch ad hominem attacks that in many ways presage the culture wars that still resonate across the country today (the issue of income inequality, for example, was dissected). Their debates were watched by over 10 million people and set the stage for modern TV and radio political discourse, which has sadly denigrated further in terms of civility and intellectual rigor.

Gordon and Neville presented the world premiere of “Best of Enemies” at Sundance in January, followed by screenings at South by Southwest (SXSW) in Austin. Living in the capital of Texas, Austinites assuredly possess no small degree of familiarity with the grinding machinery of (state) politics and government. That’s true even if the executive branch is unusually small for its size, being sharply constricted by a Republican-controlled legislature and governor.

In June, the D.C. premiere of “Best of Enemies” served as the AFI Docs opening night film, followed by a panel with Neville, Gordon, and ABC’s Sam Donaldson, who covered the 1968 convention in Chicago and witnessed firsthand the bad blood between Buckley and Vidal.

The film’s theatrical release on Friday, Aug. 7, provides a second chance to see “Best of Enemies” in the nation’s political hub, where policy wonks, government worker bees and the like thrive on punditry and ideology. That interest is sure to be amped up as campaigning for the White House in 2016 picks up steam with intensifying media coverage, impending debates and, sadly, the kind of antagonism the world witnessed on TV in 1968.