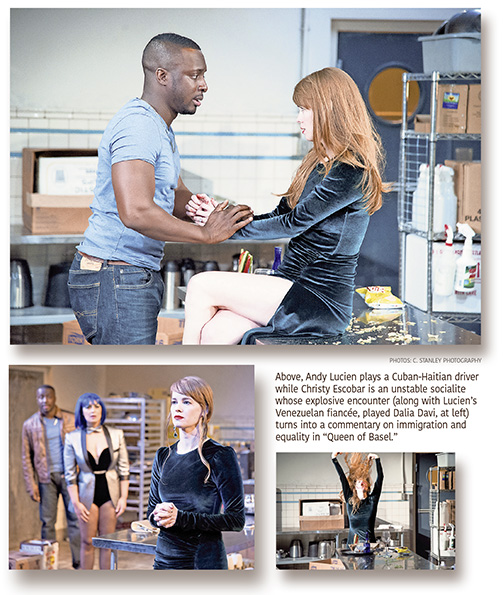 While it’s not an entirely convincing hour and a half, “Queen of Basel” is willing to tangle in thought-provoking ways with social issues such as immigration, racism and economic inequality as it recalibrates the psychodrama of August Strindberg’s 1888 play “Miss Julie.”

Here, Julie (Christy Escobar) is found escaping the hedonism and wealth of the weeklong Miami party known as Art Basel, slowly coming undone in the kitchen as she hides from a swanky party in her father’s hotel. She’s just had a run-in with Venezuelan refugee Christine (Dalia Davi), who is working the hotel party as a cocktail waitress. As Julie frets over the gin spilled on her gown — she’s in recovery, but is clearly hiding from more than just the paparazzi — Christine calls her Cuban-Haitian fiancée, John (Andy Lucien) to give Julie a ride home in his Uber.

The stage is set, then, for the trio to weave in and out, circling, confronting and confounding each other over the course of 85 minutes.

“Each character represents a perspective of the Latinx experience,” playwright Hilary Bettis writes in her author’s statement. “There is racism, colonialism, assumptions, and blindspots in all of them. Yet all three have a deep connection to their heritage, and a desperation to be seen through that lens.”

Bettis notes that “Miss Julie” is a work that she “HATED” with “utter passion.”

In the play, an aristocratic young woman, Julie, and a well-traveled valet named Jean, who is engaged to the servant girl Christine, have an affair. Shortly afterward, Jean’s feelings for Julie begin to cool, while church-going Christine looks down on the immoral woman. Faced with the dilemma of confessing her sins to her father, Julie asks Jean what she should do. In response, he hands her a razor so she can kill herself to escape her predicament.

“It was clear Strindberg had disdain for women, and viewed our existence through the Madonna/whore lens. And he believed ‘white’ male sexuality, an innate quality men are entitled to without character, is the epitome of strength,” Bettis states.

Her adaption stems from her fundamental disagreements with that play and its author’s worldview, and “so the only way I could write this adaption is to subvert Strindberg at every turn,” she writes.

“‘Queen of Basel’ is really a play about empathy,” Bettis says. It’s a powerful frame, but one that’s sometimes more aspirational than what’s executed directly on the stage.

Christine’s presence is the most sympathetic throughout, and her closing monologue, delivered in Spanish and translated by John, is both a topical exploration of Venezuelan President Nicolás Maduro’s disastrous regime as well as a memorable theatrical moment.

John and Julie dominate the play, and ultimately generate some interesting chemistry as they size each other up and explore the shifting power between them. Julie, with her Harvard MBA, alcoholism and dreams of creating an NGO focused on women’s health, often feels more like a vessel for social commentary than a fully fledged character. And she only really comes alive in a moment without dialogue, as she spirals around the kitchen, breaking down.

John and Christine are more sensitively drawn, but still come across at times less like three-dimensional people than points the author is striving to make. But the actors both have a striking stage presence that makes it easier to gloss over the lack of depth at times.

While Bettis sometimes relies on surface clichés to introduce her points — Uber driver John doesn’t drink beer, for instance, but is passionate about wine, challenging Julie’s assumptions but making some in the audience roll their eyes — the playwright is admirably uncompromising in her pursuit of subverting “Miss Julie.”

And she’s clearly a talent, with a knack for snappy one-liners and awards to prove it for her work on the TV show “The Americans.” It’ll be worthwhile to stay on the lookout for original plays by Bettis, if you miss “Queen of Basel” during its run.

The direction by José Zayas is also worth noting, with a nod to the acting naturalism of “Miss Julie” as the players circle in and out of scenes and around each other. Characters track and challenge each other, putting to good use the realistic, but limited set.

While the show doesn’t always land — and it’s not an easy starting point with “Miss Julie,” which is inescapably dated — it still raises enough interesting questions and shines a much-needed spotlight on underrepresented stories to make it worth the ticket.