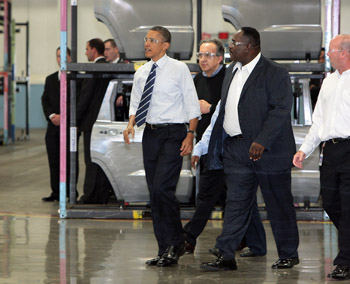 Two years ago, commentators were practically screaming about the imminent death of Detroit as the country’s broken-down automotive hub. So what’s happening in the motor city these days? Cars and trucks are selling, for one thing — maybe not at an accelerated pace, but the growth has been steadily humming along. Moreover, America’s three major automakers, Ford, Chrysler and General Motors, have all experienced remarkable sales gains and resuscitated themselves from what seemed like the brink of death not that long ago.

That’s when the so-called “big three” faced the stark possibly they’d soon run out of cash, coupled with a depleting supply of consumers willing to purchase cars from bankrupt companies.

Then along came the Troubled Assets Relief Program, or TARP, which included billions of dollars in aid to Chrysler and GM, along with additional assistance from Canadian taxpayers.

Now, just as the program is set to expire, both automakers are touting reports showing that sales are revving up and debts are being repaid.

Despite lingering consumer concerns about the economy and unemployment, Chrysler posted a 35 percent sales gain in June compared to June 2009, the biggest leap of the three Detroit companies for that month (although Chrysler was in the worst shape among the three to begin with). Likewise, GM experienced a 12 percent sales growth and Ford saw gains of 13 percent over 2009 levels.

And although sales dipped between May and June, the result of a possible summer slowdown, by August overall sales were clearly up from this time last year.

On Aug. 9, Chrysler reported that its automotive operations were profitable for a second consecutive quarter, earning $183 million in operating income and narrowing its loss in the second quarter to $172 million — mostly because of interest it was paying on its government loans, although even that was far less than its previous fourth-quarter loss of $2.7 billion. Overall, the company increased its cash reserves by $400 million, while revenue rose 8.2 percent.

GM’s progress update in August was even more dramatic. In a surprise move, the company’s chairman and chief executive, Edward E. Whitacre Jr., announced he would step down as CEO this month after GM reported its second straight quarterly profit, earning $1.3 billion in the second quarter from April to June — a stunning reversal from the previous year, when it lost nearly $13 billion in the second quarter alone.

GM also took the first formal steps for a public stock sale sometime this fall in another sign the company is weaning itself off the U.S. government. Although the company paid back its government loans five years early, “the federal government got a 61 percent stake in GM in exchange for $43 billion in aid to keep it alive. It could sell some or all of that when GM makes its public stock offering, perhaps as early as November,” explained Tom Krisher and Dee-Ann Durbin of the Associated Press. Yet GM must tread carefully in this department, as the AP auto writers point out: “If GM’s shares sell for too little, the government and other stakeholders are less likely to get their money back and GM is less likely to raise money to pay off debt.”

Nevertheless, Whitacre’s departure was a bold “mission accomplished” moment for GM (he will be replaced by board member Daniel F. Akerson) after emerging from government-sponsored bankruptcy last year.

“Things look good. There’s a foundation in place, a good foundation,” said Whitacre, who was drafted out of retirement by the government to fix the ailing automaker. “I believe we’ve accomplished what we set out to do.”

Meanwhile, Ford — the only one of Detroit’s automakers to refuse “bailout” money –— posted a first quarter profit of $2.1 billion in May and is forecasting sustainable sales growth throughout 2010. It remains the most profitable of the three companies (with a $7.3 billion profit since the beginning of last year) and has exceeded earnings forecasts several quarters in a row.

The impressive rebound of all three automakers has been good news for the White House as well, with administration officials praising the turnaround as a success story. President Obama said as much during a summertime trip to Michigan, where he visited a Chrysler auto plant in Detroit and a GM facility in Hamtramck.

“Just over a year after President Obama made tough decisions to save Chrysler and GM, these companies are returning to profitability, hiring workers and keeping plants open,” a White House statement said.

Indeed, despite receiving billions of dollars in bailout funds from the Bush administration, the two automakers were still bleeding out cash when Obama took office. He subsequently gave them two months to strike a deal with bondholders and unions. “After that deadline passed, the administration pushed them into ‘surgical’ bankruptcies, in which the companies’ ‘bad’ assets were purged, and bondholders — who usually are at the front of the line in bankruptcy proceedings — were forced to take a haircut,” explained Kendra Marr writing in Politico. “The government took significant holdings in both companies in exchange for financing their bankruptcies — though it’s carefully avoided involvement in day-to-day management decisions. Today the U.S. auto sector is smaller. Brands like Hummer, Pontiac and Saturn are gone, and Chrysler was forced into the arms of Italian automaker Fiat, which took over management of the company.”

The companies trimmed their workforce as well, although the Bureau of Labor Statistics reports that the industry has recovered some 55,000 jobs in year-over-year growth from the 334,000 jobs that were lost the previous year.

“We’ve got a long way to go, but we’re beginning to see a lot of these tough decisions pay out,” Obama told autoworkers during his Michigan visit. 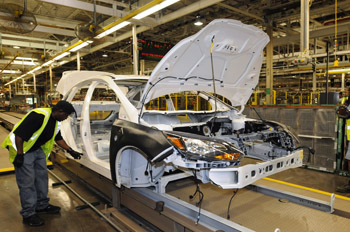 Workers at Ford’s transformed Michigan Assembly Plant in Wayne, Mich., are building pre-production 2012 Ford Focus vehicles. The plant, which will be Ford’s most flexible facility in the world, will begin full production later this year.

Yet whether the companies will be able to sustain this growth in coming months is debatable. All three companies are significantly leaner today, and the U.S. auto market is far smaller than what it was several years ago. Chrysler remains under Fiat, to whom the U.S. Treasury handed control when the company emerged from bankruptcy last June. The Italian automaker has been promoting Chrysler’s consecutive sales gains as evidence of the brand’s impending turnaround, while cautioning that the road ahead remains bumpy.

“The second quarter operating profit confirms that Chrysler Group is on track to achieve its goals, yet an extraordinary amount of work still lies ahead,” said Chrysler Chief Executive Sergio Marchionne, noting that his financial goals for 2010 include an operating profit of up to $200 million and revenue of $40 billion to $45 billion.

Yet even if things don’t go according to plan and the economy falters and job losses staunch sales growth, the automakers say they are prepared to ride out the tough times with tight inventory, aggressive advertising and hot new products.

At GM, an onslaught of new models includes a redesign of the Chevy Equinox crossover sport utility vehicle and the Volt electric car, set to finally debut in 2011.

Chrysler has plans for several new or updated vehicles by the end of this year, including a completely revamped version of the Jeep Grand Cherokee, the automaker’s bread and butter.

One upcoming move that may hit the skids though is the December debut of a brand that bombed in the United States three decades ago: the Fiat. Chrysler’s Italian automaker will introduce the Fiat 500 (known in Italy as the Cinquecento), a small, efficient European car. Marchionne has said he’s confident American consumers will welcome the automobile, especially because today’s target buyers are too young to remember the brand’s flop in the 1980s. The model, which is popular in Italy, will be introduced to the U.S. market at some 150 Fiat dealerships throughout the country.

Moving forward though, much of the automakers’ success will be tied to their global operations, particularly in emerging markets where stronger economies are predicted to fuel sales.

GM’s recent success in China, for instance, reflects the growing importance of that burgeoning Asian market to the U.S. automaker’s ongoing recovery. During the first half of this year in fact, GM for the first time ever sold more cars in China than in the United States — with Chinese sales reaching 1.2 million by June, compared with 1 million in the United States during the same period.

The automaker is also steadily increasing its inventory in Brazil, where executives predict a strong economy will help stoke sales of the Chevrolet line. In Europe, on the other hand, the automaker posted a recent loss of $506 million.

At Chrysler, hopes are pinned on worldwide sales of the Jeep Grand Cherokee, which has been completely redesigned to include interior luxury features such as wood trim and technology like wireless capabilities and satellite TV.

J.D. Power and Associates, a California-based market research firm, says vehicle manufacturers will need to focus on emerging markets — India and Russia as well as Brazil and China — to sustain any long-term gains in this ever-evolving industry.

“The center of the automotive universe is shifting quite rapidly away from the established markets of North America and Europe,” said John Humphrey, the company’s senior vice president of global automotive operations. “If you look at the other markets — Japan and Western Europe, in particular — they’re going to be flat, at best, post-recovery. So manufacturers will have to be able to tap into new emerging markets to get the volumes they need,” he explained in an interview with PRNewswire earlier this year.

Humphrey added that for smaller companies that don’t have the means to go global, various alliances and joint ventures — such as Chrysler’s partnership with Fiat — may be the best way forward.

Either way, Humphrey says, the industry will have to become an engine of change — and not a stalled relic of the past — if it is to survive.

“If you look at the auto industry during the past 30 years, it’s been very slow to change — it’s changed at a glacial pace. But today is a new reality,” he said. “There are a lot of new competitors who are very hungry. There are government pressures. There are changing consumer tastes and new markets. There are too many changes for manufacturers not to consider these options. You also have markets ripe for consolidation, like China. It’s not a matter of whether that consolidation will happen, but when.”