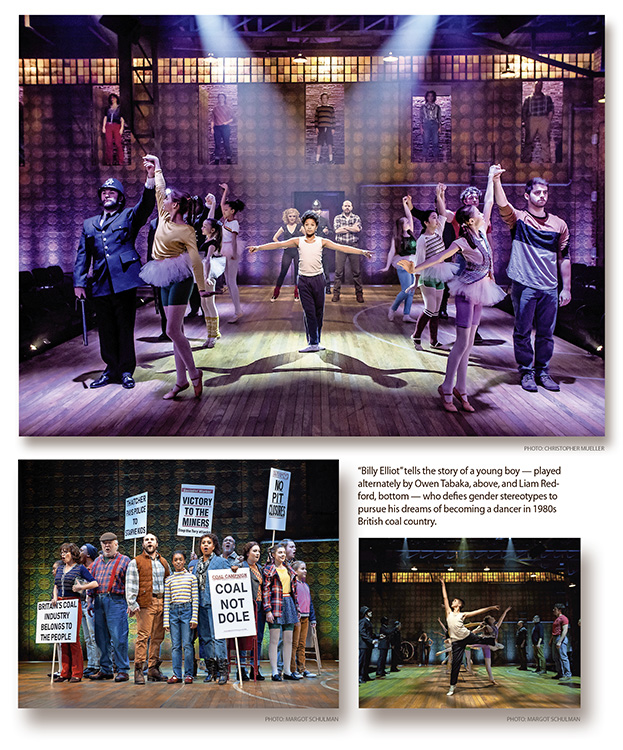 The tale of Billy Elliot was ahead of its time. Today, LGBTQ youth are in the forefront of the news when teens who don’t fit traditional gender categorizations are given a wide berth of freedom to explore themselves. Eleven-year-old Billy Elliot isn’t so lucky. He is a boy (who it is suggested is questioning his sexuality) trying to find himself in 1980s coal country in northeast England, where gender stereotypes ruled and veering away from traditional paths brought shame.

Billy Elliot the musical, now showing at Signature Theatre, is based on the 2000 British dance drama film that was adapted for the stage and swept the Tony Awards in 2008. The book and lyrics were written by Lee Hall, music composed by Elton John and here it is aptly directed and choreographed by Matthew Gardiner.

The plot is two-fold and exposes both political and personal struggles.

The first is the story of the infamous coal miners’ strike that is weighing heavily on Billy’s poor small town. The play takes place in England coal country in the early 1980s during a long and violent struggle between the coal union and the British government.

A good historical background of the era helps. The coal industry had been nationalized in 1947. The mining work provided steady income for many working-class citizens and improved the recovering post-World War II economy. However, after coal towns sprung up across Britain and communities thrived, beginning in the 1960s, the mining industry started to die, as coal was considered dirty fuel. Mines closed and jobs were lost. When Prime Minister Margaret Thatcher’s government proposed more closures and created legislation to limit the union’s legal protections, a massive nationwide strike ensued, further crippling the industry and sparking violent clashes with police. The miners eventually lost their struggle and in 1985, the strike ended.

Gardiner does a fine job of bringing this battle to life and illuminating the overwhelming tension in a small mining community. Dramatic lighting effects and angry fight choreography mimicking the clashes between striking workers who chant “Solidarity Forever” and law enforcement illustrate the chaotic conditions thrust upon Billy’s family and community.

The second and more prevalent plot line is the trajectory of 11-year-old Billy himself, who instead of longing to follow in his father and brother’s footsteps of becoming a miner, stumbles upon a different, more controversial life that he must keep secret in order to survive. While his broken family (his mother has died) fights to stay alive financially, Billy is up against assumed gender stereotypes he can’t fulfill. Instead of joining the boxing class his father sent him to, Billy secretly finds joy in a girls’ ballet class, where he dominates in skill, talent and passion.

If not for his caring and open-minded teacher Mrs. Wilkinson, played brilliantly by the talented Nancy Anderson, Billy would have become lost or worse. As it turns out, Billy has more artistic acumen than all the girls in class combined, and Wilkinson takes him under her wing for private lessons, which is when Billy’s talent soars.

When Billy’s gruff coal miner father, played by Chris Genebach, discovers Billy has traded in his boxing gloves for ballet slippers, all heck breaks loose as he attempts to stop Billy from auditioning for the revered Royal Ballet School in London.

Many times, both the miner strikes and Billy’s ballet lessons take place simultaneously onstage, which heightens the tension between the two worlds.

Undoubtedly, the best parts of the musical are the sequences where Billy dances, which are many throughout the play. The unassuming Liam Redford and Owen Tabaka alternate playing the title role of Billy, who starts off a diamond in the rough and matures into a top-tier dancer. He spins, twirls and leaps into our hearts, ensuring the audience’s investment in the play.

Rivaling Billy’s stage appeal is the doting but unsentimental Mrs. Wilkinson, who preaches tough love but whose heart is opened by Billy’s innocence and determination.

Also mesmerizing is Grant Richards, who plays an older version of Billy, in a breathtaking pas de deux with the young lad.

Besides the abundant dancing prowess, the actors showcase capable singing talent. Billy’s mother, who comes back from the grave in his memory, is played by Crystal Mosser, who boasts a clear, pleasing soprano. Even Billy’s grandmother, played by Catherine Flye, belts out a strong one with “Grandma’s Song” in which she reminisces about the trials of living with her late husband.

In the end, it is Billy’s vulnerability set against the toughness of his outer world that is the epicenter of the play’s power. The fact that Billy’s at-risk pipedream comes true, as the hardened resilience of the strikers fails, is a poignant twist.