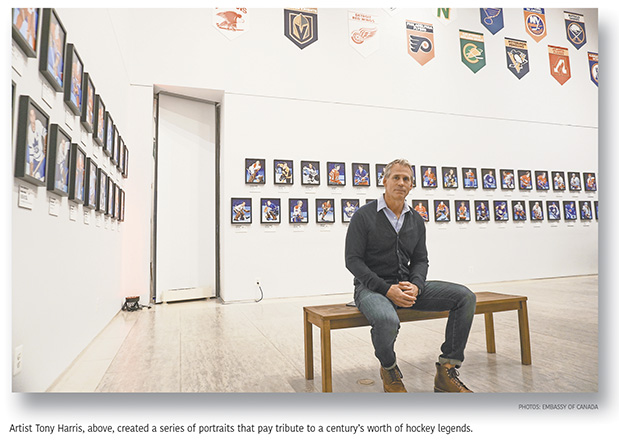 Canada is America’s second-largest trading partner, exporting roughly $280 billion in goods to the U.S. that range from cars to plastics to electrical machinery. But for many Americans, the export they most commonly associate with Canada is something else entirely: hockey.

In fact, the National Hockey League (NHL) was established in Canada in 1917 and originally was only comprised of four Canadian teams. Since then, of course, hockey has become readily identifiable as an American sport, although the league still has seven teams based in Canada and a slew of Canadians playing for the other 24 U.S. teams.

Given these connections, it’s only natural that the Canadian Embassy be the site of an expansive exhibition commemorating the NHL’s centennial celebration. “The 100 Greatest NHL Players” features a collection of original portraits by Tony Harris that pay tribute to a century’s worth of record holders, captains, Stanley Cup champions and Hockey Hall of Famers.

“Our embassy is a fitting location for the exhibition,” said Canadian Ambassador David MacNaughton in a press release. “Canada is the home of hockey and Washington, D.C., is the home of the current Stanley Cup champions.”

The Canadian Embassy approached the NHL to showcase Canadian artwork. The portraits depict 83 Canadian-born players — an impressive list that includes 39 centers, 21 defensemen, 15 goaltenders, 15 right wings and 10 left wings. Collectively, they have been Stanley Cup champions a total of 309 times.

A blue-ribbon panel that included executives, members of the media and NHL alumni had the task of selecting who made the cut.

An even more daunting task was painting 100 of the greatest National Hockey League players. But when artist Tony Harris was asked to do so, he took it in stride — and felt honored.

“As you know, hockey is as Canadian as anything,” Harris said. “[S]o the NHL asked me to do this and that’s how my exhibit ended up down in D.C.”

But it wasn’t an easy road. “I had to get the project done in 11 months,” said Harris, who noted that he was averaging about 22 hours per painting, which came out to about 2,000 hours of work and 15-hour days. The project was completed in November 2017, the 100th anniversary of the NHL.

Because of time constraints and the fact that about 30 of Harris’ subjects have passed away, the artist used photographs to create his lifelike portraits. 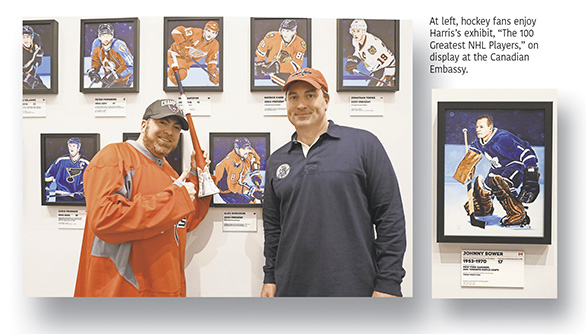 Harris is a fan of hockey and was delighted to paint his favorite player, Tony Esposito, a former Chicago Black Hawk in the 1970s and ’80s.

“He and I ended up having some phone calls,” Harris said. “He was my idol growing up. It was very cool to speak with him.”

There were a few times over the course of the year when he received feedback from players such as Bernie Parent, a retired goaltender who played for the Philadelphia Flyers, among other teams.

“His wife and he were so gracious,” Harris said. “He was a sweet man. He said [his portrait] looked like he was ready to jump right out of the painting; those were fun bits to remember.”

The opening night of Harris’s exhibit at the embassy was well-received, with about 150 stopping by before the Washington Capitals took on the Edmonton Oilers at the Capital One Arena (the Caps won). Guests donned their hockey jerseys while sampling draft beer and ketchup chips, a Canadian favorite.

Harris, who grew up in Ontario playing hockey, observed the similarities between sports and art, with each requiring a certain dedication. “One of the things that translates well with me is that I understand what it is like to be an athlete,” he said.

Harris hopes that people appreciate his portraiture not only from an artistic perspective, but also as a reflection of the international, universal appeal of sports (also see story on page XX). “One of the unique things about hockey is that it’s become such a global sport,” he said. “If you look on the wall, you’ll see Russia, Finland, Sweden, the U.S., Norway and Canada — so many countries are represented.”

As far as new projects, there is still a lot of work for Harris with different teams in the NHL. He is currently in the middle of painting players who have played 1,000 games. He also does family portraits and works a lot in the golf industry.

“I have been very lucky,” he said. “The sports world has been good to me and kept me busy for 25 years.”