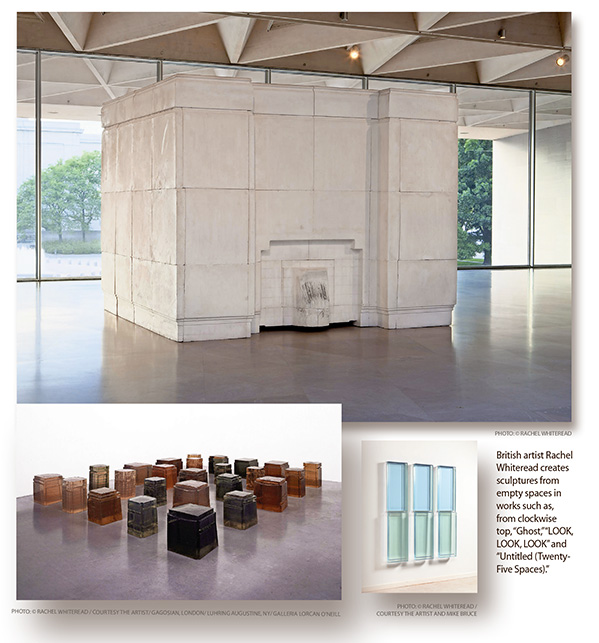 British artist Rachel Whiteread wants to change our perspective on space. Her work centers on the spaces we don’t actively occupy. It creates solid forms around forgotten areas — the space under a chair, the interior of a closet — and those forms invert our perspective.

The first comprehensive exhibit of Whiteread’s work currently on view in the East Wing of the National Gallery of Art demonstrates how she developed her distinct approach over the years with 100 objects incorporating an increasing diversity of scale, medium and color.

When it risks becoming an impersonal exploration of shape and form, the exhibit descriptions and accompanying film relate some of the family connections behind her creations. Like many contemporary artists, Whiteread seems to build her work intellectually around an idea, shifting a viewer’s perspective. Even when Whiteread’s sculptures are minimal and often based on ordinary domestic objects, the inspiration behind them feels highly personal and complex.

National Gallery regulars will be most familiar with “Ghost,” a landmark 1990 work in Whiteread’s career that is part of the gallery’s permanent collection and appears here near the start of the exhibit. “Ghost,” Whiteread’s first architecture-scale sculpture, casts the interior of a Victorian parlor in an effort to, in Whiteread’s words, “mummify the air in the room.”

The resulting initial impression is of a white mausoleum. Whiteread painstakingly plastered casts of the parlor walls, door and window in gridded sections that were assembled on a metal frame, facing out toward the viewer. The result is a positive form shaped by negative space. Some small but crucial touches draw the viewer’s eye to piece together what’s going on. Black ash stains near the bottom of one wall of the piece highlight the backside of an old fireplace. Without this critical clue, we might be permanently puzzled about Whiteread’s intent. With it, we have a window into her vision.

For all of its focus on space, Whiteread’s works are very tactile. “Ghost,” which looks like marble, is cast from plaster, as are many of her works. Making my way through the exhibit, I was drawn to pieces wondering not only what they represented, but also what they were made of, which seems to be a part of her intent as well.

A work near the opening of the exhibit, “Untitled (Twenty-Five Spaces),” looks at first glance like a group of large caramel candies arranged in a square on the floor. Formed out of resin in shades of brown and dark green, we learn that the blocks represent the space beneath chairs.

Moreover, in the exhibit film, Whiteread explains that the purpose was to capture the absence of an audience. “Untitled” resonates, intentionally or unintentionally, against a background of solemn memorials such as the Oklahoma City National Memorial that use empty chairs to evoke absence. Whiteread, however, gives us shades of color rather than uniformity, which starts to suggest individual identities within the space itself.

The exhibit film gives works like “Untitled” a deeper meaning as well. In it, Whiteread describes a pleasant, but detached, childhood. From her description, her parents, while loving, gave her solitude, which she sought more of on her own. It’s an important insight from an artist choosing to focus on empty, overlooked spaces.

Some of Whiteread’s work conveys a bleak tone, but elsewhere her varied use of color engages the viewer and lightens her approach. Going from room to room, my eye was often drawn to the variety of color on display (and, appropriately, to the often large amount of space between the works).

“Untitled (Library)” (1999) uses color subtly to brighten what might otherwise be a desolate image. Whiteread casts the negative space of a section of book stacks in a library, with strips of subtle color representing the traces of book bindings on the shelves. The choice of space again evokes solitude, but the color differentiating the books gives the piece a sense of the intellectual abundance within it. The eye is drawn not to the empty gap between the library shelves, but to the spine of the books themselves; not to the structure, but to its contents. The stacks of a library can seem either desolate or inviting, depending on one’s personality. Whiteread evokes both emotions here.

In “Ghost, Ghost II” (2009), Whiteread revisits the seminal work that helped cement her name in the art world, casting an entire mansion in purple polyurethane. The change in both material and color makes this a more hopeful work. She doesn’t seem to be “mummifying” her subject here so much as salvaging it, lovingly, for posterity.

Near its end, the exhibit discusses Whiteread’s 2001 work “Plinth.” In it, a see-through resin cast made of the inside of a granite plinth (a heavy base on which a statue or other structure is based) is placed upside down on top of an actual plinth in the middle of London’s Trafalgar Square. At its unveiling, the BBC reported British Culture Secretary Chris Smith saying the work “creates a moment of peace” within frenetic central London.

Therein lies the duality of Whiteread’s work, which on the one hand forces us to re-examine the everyday objects around us, often in ways that challenge our assumptions, and on the other inspires peace and reflection within whatever spaces we happen to occupy — busy or still, prominent or obscure, real or imagined.

Mike Crowley is a contributing writer for The Washington Diplomat.