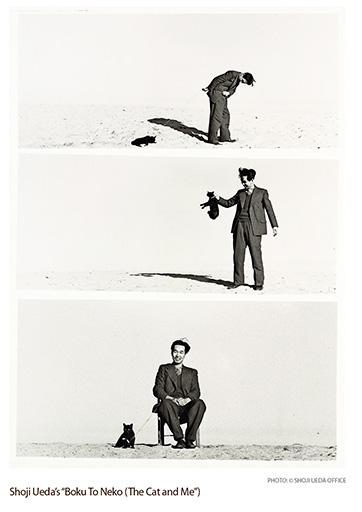 Modern Japanese prints aren’t remembered as well because the advent of photography caused the printmaking industry to collapse, forcing printmakers to adapt or face unemployment. Meanwhile, photographers increasingly embraced the new medium to document the social and economic changes upending their homeland.

Two companion exhibitions titled “Japan Modern” at the Arthur M. Sackler Gallery explore these evolutions through Japanese photographs and prints, illustrating how artists experimented with both media to capture a transformed nation.

The photography portion celebrates the acquisition of over 400 photographs from the Gloria Katz and Willard Huyck Collection and includes nearly 80 works by a dozen seminal 20th-century photographers, whose images range from nostalgic landscapes to the harsh realities of postwar Japan.

As photography became more common in the early 20th century, amateur Japanese photographers ventured out of the cities into the countryside, creating unique images that more accurately represented the real world than idealized pastoral woodblock prints. The limitations of early cameras in the 1920s and ’30s resulted in blurry gelatin silver prints that resembled a fuzzy snapshot from a half-remembered dream. One image by Ishikawa Noboru reveals a simple scene of a woman and her two children bundled in winter clothes trudging through the snow, while Hirogane Yoshiro captures a barge plying its way down a canal past a blurry row of buildings.

As their expertise developed, Japanese photographers experimented with light exposure, unusual compositions and tonality, adopting styles popular among their American and European counterparts. In a hand-colored print in the exhibition, farmers are seen stooped over picking rice, their shadows reflected in the submerged fields. The image recalls Hiroshige’s prints but in a decidedly less romantic form, showing back-breaking work by real people, not just anonymous props in a pictorial scene.

Some photographers shifted to photojournalism after World War II, documenting the horrific aftermath of atomic blasts, the plight of poverty-stricken families and the unwelcome presence of U.S. soldiers at newly constructed military bases. An image by Tadahiko Hayashi taken in 1947 is aptly titled “Mother and Child in Wasteland Burned Out by War.” Seen from behind, the lone woman is carrying a small child on her back next to a jagged brick column that is the only surviving remnant of a building that once stood there. Another image by Tadahiko in 1946 shows two boys wearing filthy rags, their bare feet black with dirt, while one boy smokes a cigarette. The image raises more questions than it answers. Where are these boys’ parents? How will their lives unfold after their childhoods have been scarred by war? 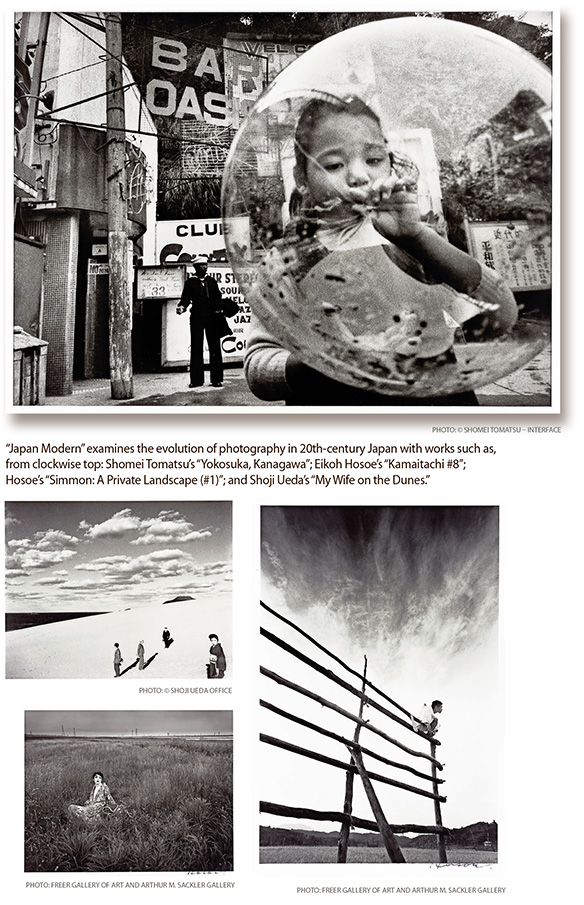 In the late 1950s, Shomei Tomatsu traveled to U.S. military bases across Japan, documenting the uneasy tensions triggered by a former enemy now encamped in their communities. One photograph from 1959 shows a Japanese girl blowing up a large balloon while a black American sailor stands behind her near a clutter of building signs written in English, not Japanese. In another image, a prostitute glares at the camera with smoke exhaling from both nostrils like a fiery dragon. One long eyebrow traces a line across her forehead while the rest of her face lies in shadows.

Other photographers took a different tack with staged scenes that created surreal moments. Shoji Ueda photographed his friends and family amid the rugged beauty of the remote Tottori and Shimane districts. In “My Wife on the Dunes,” his wife is pictured in the corner of the frame with three men standing at different angles on a stark white sand dune that cuts a sharp diagonal against a pitch-black slice of sea. In another humorous triptych reminiscent of photos by Salvador Dali, Ueda is crouched next to his cat, holds it by the scruff of the neck and finally sits in a chair next to the cat. The images feel like stills cut from a film about a man’s love for his feline friend.

The smaller exhibition of Japanese prints feels like an afterthought or a concession to a once-revered art form that has passed its prime. During the Edo period from 1615 to 1868, woodblock prints were extremely popular but their archaic representations of a changing country fell out of favor as photography developed. Hiroshige’s death in 1858 marked the beginning of the end as many printmakers were forced to turn to the tourist market in the early 20th century, creating nostalgic prints with garish colors that lacked any soul or depth.

It took decades for printmakers to develop more modern artistic styles that delved into abstraction and nonlinear forms. Even then, the work on display in this exhibition seems derivative of Western art movements. Japanese photographers had forged ahead with their own innovative work while printmaking was still mired in the past, a relic of an earlier time.

Brendan L. Smith is a freelance writer and mixed-media artist in Washington, D.C.