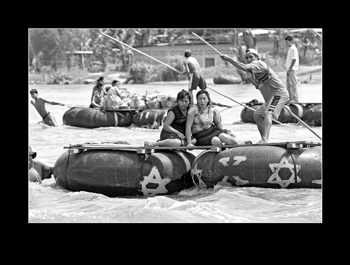 José Hernández-Claire’s 2007 photograph “The Sisters at Suchiate River” was taken along the border with Mexico and Guatemala.

The contentious issue of illegal immigration to the United States has all but vanished in the deadlocked House of Representatives, but it’s occupying a prominent place at the French Embassy.

That’s where “Broken Roots – Illegal Immigration into the U.S.,” a powerful photo exhibit by José Hernández-Claire, is on display in conjunction with FotoWeek DC.

The approximately three dozen photos are presented in black and white and show a wide array of men, women and children trying to cross over into the United States. In 2010, Hernández-Claire received financial support from the U.S. Embassy in Mexico to obtain a journalist visa that allowed him to photograph the U.S. border in Laredo, Carrizo Springs and McAllen, Texas, accompanied by border patrol officers. Together, the stark images represent the plight of many modern-day immigrants.

“In this moment it’s important to this country,” Catherine Albertini, cultural attaché at the French Embassy, said at the opening reception for the exhibition.

The tone of the photographs is often bleak and poignant, interspersed with moments of hope and unity as families take great risk in search of new lives. For instance, one image shows a legless migrant in a wheelchair in a shelter in Tapachula, Mexico. Many portray the physical struggles of trying to smuggle into the United States, with immigrants latching rides on trains and paddling boats. Other photographs are more vague and visually striking, such as an up-close look at one man’s tattoos, which cover most of his back.

The collection is just a small sample of the photographer’s enormous body of work on the topic of immigration. Eventually, Hernández-Claire hopes to compile all of the pictures into a book. For now, though, the exhibition is circulating around the country. His goal is to take a human approach to the political hot-button issue and help the public put a face to the debate. Artistic beauty is inherent in the well-executed photographs but is secondary to conveying a powerful narrative through the visuals. 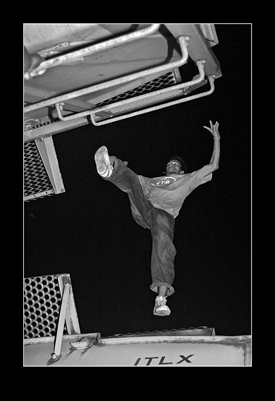 José Hernández-Claire’s 2007 photograph “Jump to the American Dream” depicts a migrant leaping from a freight wagon in Veracruz, Mexico.

“I’m just trying to be as direct as I can, to take straight photographs,” Hernández-Claire said. “I don’t manipulate the images in any way. I have been a documentary photographer for 30 years. My theme is pain, the human condition…. This is what I love doing.”

Previously, his photo essays focused on blind Mexicans, the countryside and workers in plantations and fields. Born in Guadalajara, Mexico, Hernández-Claire received a master’s in urban design from the Pratt Institute of New York. After working for the Manhattan Office Department of City Planning as a community liaison to East Harlem in the early 1980s, Hernández-Claire returned to Mexico to do street photography and documentary work.

He began chronicling the plight of immigrants more than a decade ago in both the United States and Mexico. Before appearing at the French Embassy, “Broken Roots” has been shown at the University of Texas at Austin and in Los Angeles at the Mexican Consulate.

Hernández-Claire tries to visit each location to interact with exhibit-goers. Reaction to his work has varied. But the most heartfelt dialogue he said he’s had so far was with migrants in Los Angeles.

“They were moved and at the time cried,” he recalled. “They reacted to the photos because it reminded them of that adventure, that experience they had. It was valuable feedback to me.”

Hernández-Claire has been exhibited in more than 60 individual and group shows in more than a dozen countries. Over the years, he has been mentored by and worked with influential photojournalists including Philip Perkis, Marvin Hoshino and famed Mexican photographer Manuel Álvarez Bravo.

He has also known Albertini, the French cultural counselor, as well as Mabel Gomez Oliver, deputy chief of mission of the Embassy of Mexico, for years. Both embassies joined forces to get the exhibit to D.C. While most of Hernández-Claire’s family remains in Mexico, distant relatives from his mother’s side are French, which is another reason why the exhibition was brought to the French Embassy. 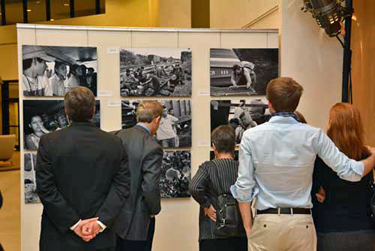 The debut of “Broken Roots” also marks the first time the French Embassy has partnered with FotoWeek DC, a nonprofit that promotes photography in the nation’s capital.

Theo Adamstein, founder and executive director of the organization, who was at the exhibit’s opening reception, said FotoWeek DC’s popular annual festival is now in its sixth year and regularly attracts tens of thousands of visitors. During the citywide photographic showcase, which concluded in November, his nonprofit works with museums, galleries and embassies to expose Washington audiences to diverse, high-quality and dynamic photography, both from the United States and abroad.

Some of the photographic works are more commercial or artistic in nature while others, like Hernández-Claire’s, are more journalistic in pursuit. There’s not an overall theme so that FotoWeek DC does not limit subject matter, Adamstein noted.

In the case of the French Embassy, the two groups began planning for “Broken Roots” in the spring. Albertini said she thought it was critical that the embassy work with other institutions to spread the message as far and wide as possible.

Adamstein said he, too, was thrilled to expand partnerships with the embassy community in D.C. and was personally inspired by Hernández-Claire’s images.

“I think it’s very powerful work related to the immigration issue in the United States,” he said. “Not only is it powerful but it’s also tragic, sad — it’s the reality of the immigration plight.”