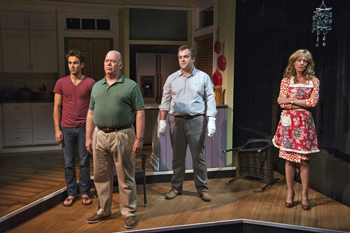 After Paul Downs Colaizzo’s haunting triumph, “Really Really,” at Signature Theatre last year, fans would likely expect an equally gripping follow-up by one of the youngest playwrights on the scene. His newest production, the world premiere of “Pride in the Falls of Autrey Mill,” also a compelling dark commentary on contemporary life, doesn’t deliver as satisfying a punch.

Family dysfunction lurks behind the picturesque suburban façade of Paul Downs Colaizzo’s “Pride in the Falls of Autrey Mill,” starring, above from right, Christine Lahti as a long-suffering wife, Christopher McFarland, Wayne Duvall and Anthony Bowden.

“Write what you know,” Mark Twain’s advice to novice penmen, could be good advice for the 20-something playwright. While “Really Really” exposed the college-age “Me Generation,” Colaizzo’s likely peers, “Autrey Mill” shines a light on the shattered life of a housewife, albeit one living in an imaginary community close to that of his own childhood.

The production’s most difficult obstacle is how to present such a familiar theme — the trappings of suburbia — in a fresh and innovative way. Colaizzo achieves this goal with drama and humor, and with the help of Michael Kahn, the Shakespeare Theatre’s artistic director who returns to Signature for the first time in nearly 20 years to direct the production. But in his attempt to be creative, Colaizzo goes overboard, rendering his plot a bit overstretched.

His world is suburbia on crack. The façade is a lavish home in a rich Southern neighborhood — “the most desired zip code in town” — complete with Roman column porches and exquisitely manicured lawns. Behind the pretense lives a tormented cast of characters: long-suffering wife Carly (Christine Lahti), her unresponsive husband Louie (Wayne Duvall), and their adult, adrift offspring Chad (Anthony Bowden) and Tommy (Christopher McFarland). They all convene for one weekend to pose as the happy family for a photo in the neighborhood newsletter to celebrate Carly’s prize-winning flower arrangement. This is a recipe for disaster that inflates their differences, tests their co-dependencies, and turns volatile.

Although Colaizzo sets the stage for intrigue, he mistakenly peppers the plot with too many psychoses. Bulimia, cheating, homophobia, incest — the list goes on. Although they all might be feasible, there simply isn’t enough time to fully develop each character’s problem. By the time the audience digests one crisis, they’re hit with another.

How the script deals with the tension between Chad, who’s struggling to come out of the closet, and older brother Tommy, a compulsive binge eater, is one example. In Act I, Chad goes ballistic on Tommy for something as menial as buying an unpopular ice cream flavor, without a hint of prior friction between the two siblings. An explanation for the eruption is given in Act II, but by this time the subplot feels contrived for lack of build-up. Similarly, when Carly reacts to Louie’s rejection by inducing herself to vomit, viewers can’t fully feel her unimaginable pain because they’ve been already subjected to pathos overload.

Although the playwright uses the extremes for satirical symbolism — while the family’s stability comes crashing down on their heads, the actual kitchen ceiling keeps falling and crushing Tommy’s arms — this success happens only in spurts. 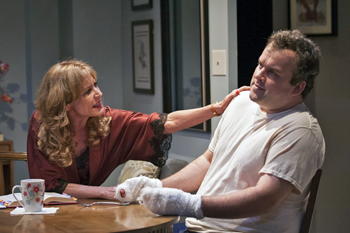 Even though the plot meanders, thankfully, in Colaizzo fashion, the play’s end delivers the emotional goods. Kahn brings the show to the fevered pitch pinnacle required for Carly’s transformation and for a brief moment, the characters find catharsis and the audience can exhale.

In large part, we buy into the story because of Lahti, who plays Carly. Lahti, an Oscar, Golden Globe and Emmy winner, manages to remain the center of her world of tangents and keeps the audience rooting for her, even though her character is unlikeable. In doing so, she gives the script its needed depth as the central figure. When she is ridiculously clueless, we laugh; when she ignores red flags, we cringe; when she accepts painful reality, we utter a bittersweet sigh of relief. When Carly begs Louie not to abandon her fantasy of domestic happiness, we pray she can get perspective. The play is ultimately about her. Though she begins the story with the least amount of dignity — she’s trying to keep three men who don’t value her — she is the only character who, in the end, may glimpse hope. In this way, Colaizzo cleverly succeeds in getting the audience to identify with a character we find despicable.

In the end, “Pride in the Falls of Autrey Mill” gels because every character holds on to a destructive inner demon until they implode. The fact that none of the characters can trust each other with their secrets is the disturbing message that Colaizzo succeeds in telling. Scratch just below the surface of American “ordinary” life and one finds the fairytale fleeting and that pride in materialism eventually has to fall.

Pride in the Falls of Autrey Mill