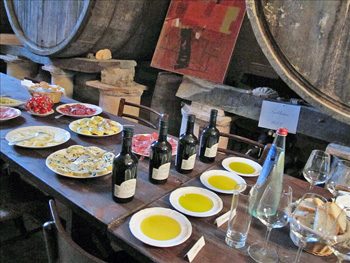 A group of people from Bethesda, Md., is gearing up for a trip to Italy. Some downtown dwellers are planning on venturing to Cuba, while literary buffs who frequent a particular Connecticut Avenue bookstore are jet-setting to India early next year.

In what seems like an emerging trend, local businesses are expanding their horizons — and bottom lines — by hosting trips abroad to exotic locales for their local clientele. Domenico Cornacchia, chef and owner of Assaggi Mozzarella Bar in Maryland and Assaggi Osteria in Virginia, is taking fans of his cuisine to the place where it all started — Italy — during the second week of October.

Domenico Cornacchia, chef and owner of Assaggi Mozzarella Bar in Maryland and Assaggi Osteria in Virginia, leads culinary-based trips to his native Italy.

“We’ve been talking to customers at the restaurant about where I go when I travel,” Cornacchia told The Diplomat. “From there, the idea came about [for this trip] and people were very interested in the sites where I travel when I go on vacation on my own.”

Cornacchia — who was born in Ascoli Piceno, Italy, and first became an apprentice at the age of 12, making fresh pastas and other specialties by hand — is excited to take a group to the northeast side of Italy on what will be the third year that Assaggi sponsors such a trip. He takes patrons from all three of his area restaurants to Italy’s historic landmarks, quaint farms and, of course, its restaurants and wineries, touring the region from a chef’s perspective.

“They know that when I go I know the country, all the way down to Sicily,” he said in heavily accented English. “I know a lot of sites tourists wouldn’t necessarily be able to pick up.”

If you’re one of the lucky dozen to 15 people attending the trip, expect to cover and concentrate on a 100-mile radius. “We make sure we take advantage of local activities and festivities,” Cornacchia noted.

He’s partnered with Bethesda Travel Center to give visitors an inside view of both the culinary and cultural highlights of his native Italy. The northern region they’ll be touring is well known for its wine, cheese-making, and specific types of delicacies. But the wide-ranging trip will also feature activities such as an excursion to the mountain shrine of San Romedio and a tour of the Giulietta e Romeo castles, which inspired Shakespeare’s “Romeo and Juliet.”

Despite a tough economy, Cornacchia said most clients who go on the trip go overseas once or twice a year and can afford such a unique vacation. “Their idea with us is that they can see specific areas and sites that by themselves would be very difficult to find,” he said. “It’s an unbelievable experience for the amount of money they do spend.”

Those who’d like a taste of another exotic destination — one with more of a Latin flair — can hop aboard Cuba Libre’s trip to Cuba. Guillermo Pernot, the Buenos Aires-born chef of the Penn Quarter restaurant, is planning to bring a group of around 16 travelers to Cuba in what will be the second trip of its kind (also see “Culinary Trek to Cuba” in the April 2012 edition of the Diplomatic Pouch online).

During Pernot’s first trip earlier this year, a group of travelers from D.C., New York, Philadelphia and St. Louis spent five days in Havana and “ate 24 hours a day.”

This upcoming trip takes place in January, which Pernot said is the ideal time to visit because the danger of hurricanes is minimal and the weather is warm but not too hot. 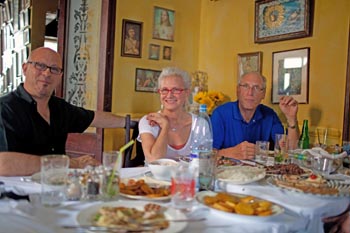 Patrons of Cuba Libre in Penn Quarter were able to take a culinary tour to Cuba earlier this year.

“We usually pick five-star hotels and stay in Havana,” he said. “I hope it will be as successful as the first trip.”

Pernot said the concept of restaurants and businesses sponsoring trips abroad for local patrons is “great.”

“Chefs should be able to demonstrate the knowledge they have and the only way they can do that is by bringing people to specific countries,” he said.

Pernot also believes the costs are well worth it because the guided trips are once-in-a-lifetime experiences — especially when they take you to places like Cuba, which, despite its close proximity to the United States, is still a world away for most American tourists, who are only allowed to visit the communist-controlled island for “purposeful travel” such as learning exchanges.

And that’s exactly what happens on Pernot’s trips.

“So many people learn about the warmth of the Cuban people and how welcoming they are to Americans,” he said. “Cubans are very happy they can demonstrate the advances they made in the culinary world.”

For learning of a different kind, the popular Politics & Prose Bookstore has teamed up with D.C.-based Academic Travel Abroad to host a trip to India this January.

Participants will visit the Jaipur Literature Festival, the largest literary festival in the Asia-Pacific region. Susan Coll, director of events and programs at Politics & Prose, has previously attended the festival herself. “It’s just a natural tie-in for the bookstore,” she said. “Customers really enjoy doing things with other people they meet at the store.”

The independent D.C. bookstore has already been expanding its portfolio in an effort to take its readers on the road, literally, to experience the sights and sounds behind the words of famous tomes. It’s signed booklovers up for trips to Fallingwater, Pennsylvania, Washington Nationals baseball games and the Philadelphia Flower Show, among other outings.

The trek to India, though, is by far the most ambitious program that Politics & Prose has attempted. “Politics & Prose used to take people in a more informal way to Mexico,” Coll said, noting that many locally based excursions tend to take travelers to places like England and Ireland.

Coll said she hopes to have 30 people join the India trip. “We don’t know if we’ll get that many people, but we’ll be happy to take a small group,” she added.

While in India, the tourists will visit New Delhi (and meet with the Washington Post correspondent there) and journey to popular sites with a literary bent.

But the highlight will be the Jaipur Literature Festival, which features an A-list lineup. Last year, 260 authors attended the event, which is organized by William Dalrymple, a well-known author, book critic and essayist who lives in New Delhi.

“There has been amazing literature coming out of South Asia these days,” Coll said.

The economy is of course a concern for Coll and the bookstore, given the expenses of traveling to South Asia, but like Cornacchia and Pernot, she says these intimate excursions are priceless. “This is a trip for people who want … a special travel experience.”