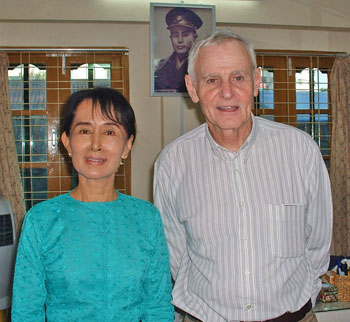 American filmmaker Robert H. Lieberman’s intriguing documentary, “They Call It Myanmar: Lifting the Curtain,” paints a rarely seen portrait of modern-day Burma (renamed Myanmar by its authoritarian government), a country that is anything but modern.

Lieberman shot the film clandestinely over two years, offering a rare glimpse inside the second-most isolated nation in the world (the hermit kingdom of North Korea takes top honors as the most closed-off nation).

Lieberman in fact says he would like to make his next film about North Korea. That wish may seem quixotic, but who would have imagined just a few years ago that he’d be able to collect hours and hours of such remarkable footage of life inside Burma.

For that matter, who would have ever imagined that after nearly 50 years of ironfisted military rule that plunged the once-flourishing Southeast Asian nation into abject poverty, the military junta would begin a political opening that in the course of a year would lead to an unprecedented thaw in U.S.-Burmese relations. Equally unimaginable is the fact that Aung San Suu Kyi, the Nobel Peace Prize-winning leader of Burma’s opposition, now a free woman, is participating in the very government that put her under house arrest for 15 years.

Last month, Suu Kyi, one of the subjects in “They Call It Myanmar,” made her long-awaited first official visit to the United States, where she was lavished with a Congressional Gold Medal, met with President Obama, and called for U.S. sanctions to be eased in light of the country’s recent progress.

To coincide with her highly publicized visit in mid-September, Robert H. Lieberman came to the Washington area to host screenings at the American Film Institute (AFI) Silver Theatre of his documentary — which, despite the recent moves toward political liberalization, reveals a country that’s both beautiful yet beaten down by decades of repression.

Lieberman, who’s also a senior physics lecturer at Cornell University and a novelist, spoke with The Washington Diplomat about his time in the country, where he secretly shot more than 120 hours of film and interviewed over 100 Burmese, including Suu Kyi, whose house arrest ended shortly after her interview.

The director said he was constantly dodging the authorities during his shoestring filming. “Some woman passed me by, tapped me three times on the shoulder, and then disappeared. I knew, oh boy, I’m in trouble. I quickly packed everything and took off,” he recalled. “I had a young film director who was with me in downtown. I left him somewhere else. I didn’t want him with me while I was filming. I sort of circled around and picked him up. You’re not allowed to film. And you’re not allowed to film, of course, anything army, police, or anything like that.”

Lieberman was already familiar with the pariah country, having visited Burma multiple times over the years — the first time as a Fulbright specialist working at the U.S. Embassy.

In an interesting parallel, the professor also lived in Eastern Europe just as communism was crumbling. “I had a Fulbright in the former Czechoslovakia when the [Berlin] Wall fell,” he said. “The level of fear in Burma was multiples that of Eastern Europe. People are really afraid. If you get onto the radar, if the regime locked on you, they throw you in prison. Prison there is no joke — broken people, disease…. They put you in solitary confinement. One guy, a translator I had here in the States, he told me they placed him in a concrete tube and closed the end. He couldn’t stand up and couldn’t stretch out. How long would you last? I wouldn’t last three minutes.”

Lieberman says he doesn’t know how government officials have reacted to his film, but that he plans to go back for another visit later this winter.

“Unless I get funding, I’m not going to make a new movie. I could do a follow-up, but I don’t think things have changed as dramatically as the news media portrays them,” Lieberman says, pointing out that even though Suu Kyi’s National League for Democracy won nearly every parliamentary seat that was open in a by-election last April, the military still dominates the legislature — by design.

“There was a constitutional vote, a so-called vote, but it was really a rigged election in which the new constitution was approved. This was before Suu Kyi was released. As a result, 25 percent of the [parliamentary] seats are held by the military. You can’t do any constitutional changes. She won only 7 percent of the seats,” he said, noting that the by-election set for 2015 will be an even bigger test of the government’s commitment to reform.

“I worry about [Suu Kyi] being co-opted. The only leverage she has now is sort of U.S. aid — that could be turned off or turned on,” Lieberman said.

“Suu Kyi talks of herself as a politician. Friends of mine suggest that she should not have gone into politics, that she should have been a moral force like Bishop Tutu or Gandhi because once you get into politics, you’re negotiating, you’re wheeling and dealing, and you’re compromising. The question is, was that a smart move? I don’t know; I can’t answer that.”

But the director does harbor a more cynical take on the recent rapprochement between the United States and Burma, whose economic lifeline, in the wake of Western sanctions, had long been China.

“Are you aware of the forces that have been driving this? One is geopolitical. The West is interested — and the United States — in counterbalancing China, which has been a main trading partner of Burma,” he said. “The West has been dying to do business there — gas reserves, oil, minerals, timber, agricultural lands.”

He also takes a hard view of the government despite its recent overtures. “They want to send their kids to Cornell or wherever. They want to be able to travel free. All these persons in the military took off their uniforms and put on suits. Some of the big tycoons, or cronies, are trying to cast themselves as philanthropists.

“What’s going to really change?” Lieberman wondered. “Right now, nothing on the ground. People are just as poor, if not poorer…. The question really is, what’s going to happen to the average Burmese? Is this going to turn into a democracy? That’s a big, big question mark. How much is [Suu Kyi] going to have to compromise? What are the political realities? Anybody who tells you they know the answer is lying. It’s a mystery,” mused Lieberman.

The filmmaker has observed concrete changes, however — some as simple as being able to openly hang pictures of Suu Kyi and her revered father, General Aung San.

“The fear level is lower. People were really scared, and they hated the government. So the Burmese are somewhat optimistic now, but they feel like a friend of mine says, ‘It’s all moving at a snail’s pace.’ That’s his assessment. I think expectations were enormously high when she was released, but now the reality is setting in, or whatever the reality is.”

Asked what he would view as more palpable change, Lieberman touched on some of the deep-seated problems that have yet to be addressed. “The educational system has been wrecked. The poverty is horrendous, which you can see. Child labor is a major problem,” he said. “The whole social structure has been decaying and rotting for half a century — 50 years of decay. The country is going to have to be built up. It’s not going to change overnight. This is a decade’s of work.

“This is years of having to rebuild a country that’s been destroyed. It’s been isolated from the rest of the world for 50 years. I think you have to start with education and deal with the poverty and disease.”

Though intimately familiar with Burma’s problems and politics, Lieberman, whose novels have dealt with social themes such as climate change, insists that his film was not intended to send a political message.

“We don’t hit people over the head with a message. It’s a novelist’s eye view of the country,” he explained. “I want to take you on a trip. I want to show you this country. I want to show you the good, the bad, the ugly, everything. But I want you, the viewer, to start asking questions. How did it get like this? I want you sufficiently curious that you want to learn more.”