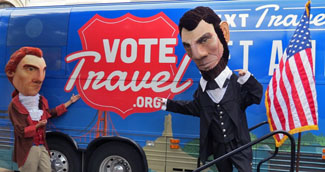 The word “travel” conjures up different meanings for different people. For some, it’s associated with luxurious escapes to exotic new locales. For others, it’s a part of everyday business operations. But for a huge percentage of U.S. workers — and the cities in which they live — the travel industry is a source of income.

“For every 33 visitors we welcome to the United States, that creates one American job,” said Blain Rethmeier, senior vice president for public affairs and government relations at the U.S. Travel Association, a national nonprofit with 1,200-plus members that works to increase travel to and within the country. “It’s really taking it from that fun and frivolous notion and putting some solid research and some economic relevance behind what the travel industry actually provides everyday Americans.”

The travel industry employs 14 million Americans, contributes $1.8 trillion in economic output a year (and 2.7 percent of the country’s GDP), and is America’s export leader, according to the association. Here in Washington, the tourism industry is second only to — no surprise here — federal government work. Travelers from overseas make up about 10 percent of D.C. visitors, but they generate 27 percent of the economic impact from travel, according to Destination DC, a nonprofit whose mission is marketing the District to travelers. The total spent by all D.C. visitors last year was $6 billion, up 6.2 percent from $5.68 billion in 2010.

In an effort to make people — not only foreign travelers with cash to burn but also U.S. voters, politicians and candidates this election year — more aware of the travel industry’s impact on the economy, several initiatives are under way. One comes straight from the top: President Obama’s National Travel and Tourism Strategy. Another, called Vote Travel, is sponsored by U.S. Travel Association. They both focus on easing foreign guests’ entrée to the country, providing a better experience once here, and promoting the United States as an unrivaled travel destination to compete with Europe and other tourist hotspots.

In January, Obama announced the “We Can’t Wait” campaign and signed an executive order with an eye toward eliminating some of the red tape for foreign travelers. The National Travel and Tourism Strategy released in May solidified that pledge and aims to bring in 100 million foreign visitors by the end of 2021.

As part of the plan, Obama asked the Homeland Security and State Departments to speed up non-immigrant visa processing for travelers from key growth markets, namely China and Brazil. He also proposed increasing trusted traveler programs and expedited screening for low-risk travelers, as well as expanding the Visa Waiver Program, which lets 36 participating countries travel to the United States for 90 days or less without a visa, and adding Taiwan to it.

“One of the policy issues our organization has been working on has been focusing on streamlining the airline security process, establishing the trusted traveler program so that people that fly frequently don’t have to endure the hassles associated with going through airport security or getting on a plane,” Rethmeier noted.

One of the biggest components of the administration’s strategy focuses especially on China, Brazil and India because the number of travelers from those countries is expected to grow by 135 percent, 274 percent and 50 percent respectively between 2010 and 2016, according to a White House press release. Chinese and Brazilian tourists also spend more than $6,000 and $5,000, respectively, per trip, the Commerce Department reports.

However, many of those deep-pocketed travelers from booming economies are currently spending their money in other places such as Western Europe (which is capturing a larger share of the long-haul market from Brazil, China and India than the U.S. is), in part because it often takes weeks for U.S. consuls to interview applicants and process visas.

In particular, Brazil — whose tourists spend more per capita than any other nationality — has complained about the arduous visa process, which can require thousands of dollars and significant legwork just getting to U.S. consul offices that are sometimes hundreds of miles away, all before ever stepping foot outside the country to actually travel to the States.

It’s a hassle that prevents many foreigners from coming to the U.S. — and one the State Department has been trying to remedy, without compromising national security. 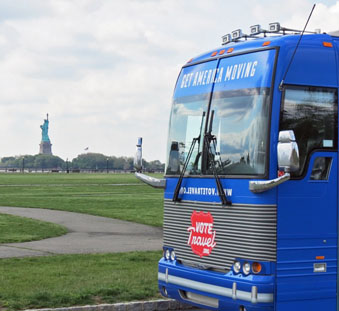 The Vote Travel campaign, sponsored by the U.S. Travel Association, embarked on a 20,000-mile bus tour across the U.S., holding rallies in cities such as Washington, D.C., and New York to highlight the importance of the travel industry, which employs 14 million Americans.

Among the improvements: In Brazil, consular officers issued more than 555,000 visas in the first half of fiscal year 2012, compared to 350,000 visas during the same time in 2011, an increase of 59 percent, according to the State Department. In China, there was a 46 percent jump in visas issued between the same timeframe.

Wait times, while still high, have dropped in Brazil and now average two weeks or less in Brasilia, Recife and Rio de Janeiro, and 35 days or less in Sao Paulo. In addition, two new consulates will soon open in the country of nearly 200 million.

“The administration deserves a lot of credit because a lot of the new policies they put in place this year have worked to reduce wait times in key markets like China and Brazil,” Rethmeier said. “The visa waiver in particular would really aid a country like Brazil that is, I think, interested in the program but unless Congress takes any action, would not be eligible for the program.”

Modeled on the grassroots efforts of a political campaign, the Vote Travel effort has similar goals in its five-point “Get America Moving” plan:

• Attract more visitors to the United States to recoup the country’s share of international travelers’ spending, which dropped 30 percent between 2000 and 2010, through more visa-free travel, a streamlined visa process and an easier entry process overall.

• “Keep America Meeting” by encouraging face-to-face business meet-ups through making businesspeople and politicians aware of the benefits of such contact.

• Strengthen communities and families by encouraging Americans to travel with their families in order to reconnect.

Vote Travel came about in January, when the association started to consider plans for May’s Travel and Tourism Week. “We were talking about the benefits of travel and 2012 being an election year. We thought that was a unique way to perhaps break through a lot of the different interest groups that are there,” Rethmeier said. “On its face, Vote Travel might sound like you’re supporting going on a vacation, but I think through the different messages that we’ve delivered through the campaign, it’s so much more than that. A vote for travel is obviously a vote for jobs and a vote for jobs is a vote for supporting your local community.”

The campaign kicked off at Union Station on March 21 with the Get America Moving Policymaker Reception.

“We had upward of more than 100 members of Congress come and meet the [150 travel industry] representatives and hear about the importance of what travel means to their district and to the state and to the broader economy,” Rethmeier said.

From there, the campaign continued on a 20,000-mile bus tour, holding rallies in Dallas, Miami, Los Angeles and Nashville, for instance, to engage local officials and voters. Vote Travel has also made progress through its Get America Moving Pledge, which asks people to commit to supporting policies that reduce travel barriers.

What Tourists Mean to D.C. 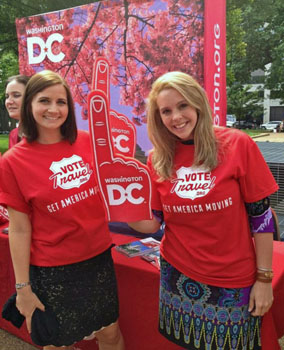 Destination DC joined forces with the Vote Travel campaign on May 8 for the fourth annual D.C. Travel Rally. In Washington, the tourism industry is second only to the federal government; last year visitors to D.C. spent $6 billion.

When people think of D.C., they think iconic: the White House, the Capitol, the Smithsonian Institution. But Destination DC wants people to look beyond the National Mall.

“Everything about the Mall is incredibly attractive — the monuments, the Smithsonians,” said Elliott Ferguson, president and chief executive officer of Destination DC. “They’re attractive because they’re free and they’re really interesting. But the reality is the heart of any city is really the people and the community. When you think of a city like Washington that has over 160 embassies and so many diverse restaurants and great architecture, a lot of history — those are the things that we try to focus on as well because those are the things that we’re known the least for.

“It’s important that people know there’s a value added associated with coming to Washington for personal travel,” he said. “What do you do when the Smithsonians close? That’s what we’re trying to fill in.”

Within the past decade, the District has been making a name for itself as a destination for arts, culture, food and fashion. The $8 billion of new infrastructure under construction here — including the Marriott Marquis, slated to open in 2014 with 1,175 rooms and more than 100,000 square feet of function space — attest to the city’s increasing draw beyond school field trips and history buffs.

The hospitality industry employed 76,000 people in D.C. in 2011, a 7 percent growth over 2010. The top five overseas markets for visitors to D.C. are the United Kingdom, Germany, Australia, China and France.

“I do not anticipate it slowing down in the next few years simply because of the investment being made in continuously building Washington as a destination,” Ferguson said, adding that the $662 million in annual tax revenue generated by tourists reduces the amount of taxes each D.C. household must pay by $2,400 a year.

“As the nation’s capital, there remains consistent tourism business to the city, and D.C. is a strong attraction to many markets of all ages,” said Sarah Deam, director of sales and marketing at Washington’s Hay-Adams Hotel, where 75 percent of guests are business travelers. “The continued investment into the city and the unveiling of new memorials has also encouraged new visitors and increased awareness of the city as a destination.”

Despite all that tourism does for the U.S. economy in general and for local economies in particular, most people still overlook the industry’s contributions.

“For many folks, when you associate the travel industry, you associate it with a personal experience. For many folks — myself included, I think back to days in Disneyland or the trip to Hawaii that I took,” Rethmeier said. “For me, those memories are always fun and enjoyable and less serious than, say, thinking about an energy policy or health care bill. I think what fails to click in people’s minds is that if it weren’t for the travel industry, a lot of business would not be possible.”