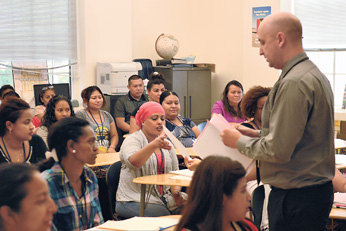 Regardless of what they speak at home, everyone’s here to learn English — and they’re doing it with pride and determination.

This mini-United Nations scene repeats itself every day in dozens of classrooms at Carlos Rosario International Public Charter School, the nation’s first adult charter school and the only one in the District of Columbia devoted to foreign-born immigrants.

Patrick Benedict, a teacher at the Carlos Rosario International Public Charter School in D.C., passes out assignments to his adult education class.

“We’re publicly funded, just like any other charter school. The only fee is a $20 ID card and textbooks,” said HollyAnn Freso-Moore, principal of the school’s main Harvard Street campus in Washington’s Columbia Heights neighborhood (the newer 50,000-square-foot Sonia Gutierrez campus in Northeast D.C. was inaugurated in October 2013).

On the last day of August — which also happened to be the first day of classes in the District — Freso-Moore led The Washington Diplomat on a tour of her school, which currently has 2,300 students, up from 1,200 in past years. But over time, the waiting list has dropped from more than 1,000 to around 500.

Carlos Rosario’s students hail from 84 countries, with the most coming from El Salvador, followed by Ethiopia and then Mexico. Their ages range from 17 to 85.

“I once had a 72-year-old and a 17-year-old in the same classroom,” said Freso-Moore, herself an immigrant from English-speaking Guyana. “You can easily have three generations in one class.”

The now-famous school — named after a Puerto Rican activist and educator — began life in 1970 as a small, community-based organization. It eventually came under the umbrella of D.C. Public Schools and served as many as 3,500 students, but closed in 1996 following budget cuts. With leadership from fellow Puerto Rican educator Sonia Gutierrez, the facility was re-established in 1998 as the first taxpayer-funded charter school in the United States exclusively for adults. Over the last 40-plus years, Carlos Rosario has graduated over 70,000 students.

Some 58 percent of those attending Carlos Rosario School are women, and 84 percent of students are below the poverty line. Yet its achievements have made headlines. Over the years, the institution has received a number of distinguished visitors, including celebrity chef Frederic Sonnenschmidt, D.C. Delegate Eleanor Holmes Norton, Great Britain’s Prince Charles and Vice President Joe Biden. 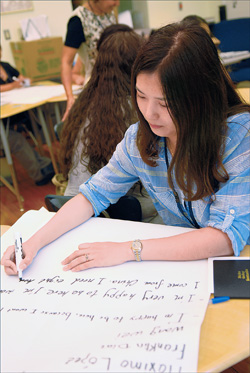 Books in English and Spanish help students prepare for the General Educational Development (GED) test and other life skills.

“I started teaching here in 2001 and just never left,” said Freso-Moore, a specialist in ESL (English as a Second Language) education. Roughly 70 percent of the student body is from Latin America, so it’s no surprise that ESL is a priority here, with courses at all levels. The school also offers a GED, or high school equivalency test, in Spanish, in partnership with the Mexican Consulate.

“This program, called Plazas Comunitarias, allows students who did not earn their elementary or middle school diplomas to study in Spanish,” she explained. “Over 500 students have earned their diplomas through this program, which is open to any Spanish-speaking student.”

In addition, Carlos Rosario School trains immigrants to take the U.S. citizenship test and provides other supportive services (in English, Spanish, Amharic and Vietnamese) such as helping students find daycare for their children and offering health screenings and HIV testing. It has also taken in political refugees from countries as diverse as Azerbaijan, Myanmar and Sudan.

Enrolling at Carlos Rosario School is based on a lottery system.

“We test students, we decide what level they’re in, and at the end we have a lottery,” Freso-Moore told us. “[It’s] based on the number of students and the session they want to study. For example, if there are 50 students for level one and only 32 spots, our software pulls winning names out randomly. The remaining students just continue with their lives until there’s a space available.”

The only legal requirement is that students must reside in D.C. and must provide documentation; the list of acceptable documents includes an official embassy letter.

The school’s $20 million annual budget is funded mostly by taxpayers, though it’s also received private donations from a variety of sources including AT&T, Bank of America, Toyota, Verizon and the Hotel Association of Washington, D.C. In addition, the Greater Washington Hispanic Chamber of Commerce has helped the school with small-business expertise, and it’s also worked with the embassies of El Salvador and Ethiopia.

“We’ve always had computer-assisted language labs at the school. We thought we could improve on that, so we’ve spent the last year and a half completely revising the labs. Now, instead of just studying ESL in the lab, they study digital literacy as well. We give them the vocabulary they need to talk about these skills, like learning how to Google, and learning about passwords and keeping them secure.” 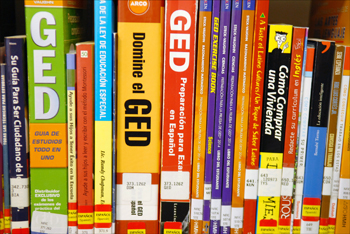 Books in English and Spanish help students prepare for the General Educational Development (GED) test and other life skills.

While the average age of students at the school is 35 to 40 years old, Freso-Moore says there’s a huge gulf between those with smart phones who know how to log onto Facebook and older students who know nothing about computers or the digital age.

“Even using a mouse is a challenge for them,” she said, noting that UNESCO has chosen the school’s program as a model for others to follow. Throughout Carlos Rosario School, there are laptop carts that anyone can use, not to mention mobile technology labs and computers in every classroom.

But not everything has to do with technology. So-called “soft skills” like offering prospective employers a firm handshake, showing up on time, dressing appropriately and making eye contact are often just as important as knowing how to look up websites.

“Employers tell us it’s great if workers have certification, but they have to integrate seamlessly into the work environment,” Freso-Moore explained. “This means never being late for an interview and looking people in the eye. That’s very hard for our Ethiopian students, for example, because in their culture that’s a sign of disrespect.”

It’s also important to speak loudly enough to be heard, she added. “In some African cultures, having a very soft and quiet voice is seen as being respectful; loud is looked down upon.”

Knowing how to properly address your boss is also crucial. “It’s not just learning the words, but the culture too,” she said. “That’s why culture shock can impact your ability to work.”