Home The Washington Diplomat December 2014 CityCenterDC Comes Into Its Own 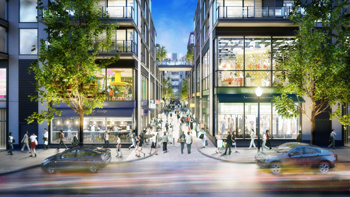 A decade ago, there wasn’t much to be said about large parts of downtown Washington, D.C. Home to uninspired office buildings, the portion of the city located between 9th and 15th Streets, NW, and Pennsylvania and Massachusetts Avenues, NW, was better known as a large office park — buzzing with professional activity during the day, but dead at night. The retail offerings largely reflected that reality, with food and shopping being more utilitarian than unique.

Photos: The Apartments at CityCenterDC

Tenants of the Apartments at CityCenterDC now have a growing number of shops and restaurants at their disposal, including DBGB Kitchen and Bar, Kate Spade, Burberry, Hugo Boss and other high-end retail.

But that has started changing, and one of the catalysts is CityCenterDC, a 10-acre complex of buildings located on the site of the city’s old convention center. Encompassing five city blocks and totaling 2.5 million square feet of condominiums, rental apartments, office space, dining and shops, CityCenterDC’s six buildings have taken shape this year. After close to 15 years of planning, the $950 million development — most of which was funded by the Qatar Investment Authority, the Middle Eastern country’s sovereign wealth fund — is taking in new residents, retailers and office tenants, and in the process is remaking the city’s downtown.

“I think what it’s done is raise the bar one more level. We’ve been on a trajectory to higher-quality offerings — whether it’s office, retail or residential — over the last decade. I think this pushes us one step further,” said Richard Bradley, executive director of the Downtown DC Business Improvement District, which works to attract office tenants and visitors to the area.

Those higher-quality offerings are evident in the names and reputations of the retailers who are coming to CityCenterDC — in some cases, their first outposts in the city. Kate Spade, Burberry, Hugo Boss, Longchamp and Zadig & Voltaire have opened storefronts in the development; Hermès, Salvatore Ferragamo, Jimmy Choo and Louis Vuitton also have plans to open. Comparisons to Rodeo Drive in Beverly Hills, along with New York and Paris, have been ambitiously tossed around.

That has D.C. officials excited at the prospects of new high-end business; in recent years, they have focused on stanching what’s known as “retail leakage,” or the practice of both local residents and visitors leaving the city to do their shopping. In cases of luxury outlets that cater to the city’s well-heeled residents and international visitors, those destinations were Tysons in Virginia and Friendship Heights in Maryland. No longer.

“For so many years, it turned out that Friendship Heights and the retail up there was the highest-priced retail, and quite frankly, a lot of the people who went there were people from overseas, from other countries. We’ve now brought that down to CityCenterDC,” exclaims Bradley.

That will pay dividends with international visitors, he says. Local downtown retailers like Macy’s already rely on customers from overseas for a quarter of their business, according to Bradley, and the presence of luxury brands at CityCenterDC will not only attract more of them, but also prompt them to spend more money. In 2013, 1.6 million of the 17.4 million visitors to D.C. came from abroad, but they tended to spend more per visit — $472 per stay, with an average stay of three nights.

It’s not just the retail, though. The hundreds of luxury condominiums herald a new era of downtown living that D.C. officials have been seeking to promote — at times to the dismay of the city’s less well-off residents, who are being increasingly crowded out by the young, affluent urban professionals flocking to the nation’s capital.

Since 2000, the number of people living within a mile of the intersection of 9th and G Streets, NW, alone has jumped from 38,000 to 55,000, and officials expect CityCenterDC to continue fueling a virtuous cycle of economic prosperity whereby more people mean more offerings — which then attract even more people. Prominent Washingtonians that will call the development home include Attorney General Eric Holder, who purchased a $1.5 million condo, and Sen. Claire McCaskill (D-Mo.), who paid $2.7 million for hers (prices average $700 per square foot). 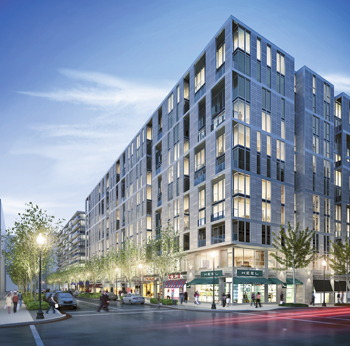 CityCenterDC has also landed an anchor for its office space: global legal powerhouse Covington & Burling, which moved into a 420,000-square-foot space this summer. A luxury hotel is also planned: Conrad Hotel, Hilton’s luxury brand, is set to open a 370-room hotel on the development’s western end. It even changed the area’s traffic — portions of 10th and I Streets, NW, both long closed off by the old convention center, were recently reopened to car, bikes and pedestrians, allowing more movement through an area once dominated by the monolithic convention center. There’s even a 25-foot-high electronic art installation to break up the complex’s sleek but somewhat sanitized feel.

The one thing that won’t appear at CityCenterDC are banks — rarely considered a sign of retail vibrancy — bars or liquor stores. As part of its investment in the project, Qatar demanded that retail tenants comply with the tenets of Islamic law, which prohibits alcohol or the charging of interest. (Restaurants will be able to serve alcohol, but businesses whose primary business is alcohol are prohibited.)

For Bradley, all the movement at CityCenterDC — whether high-end retail or luxury living — is helping elevate Washington’s status from a staid government town to a global destination on par with New York and Paris. The New York Times compared CityCenterDC to Rockefeller Center. “This positions us. When people come here, they’re going to say, ‘I don’t find anything better anywhere.’ Washington has arrived at that point,” he said.

It is also helping spur projects in other parts of downtown, including extending the retail corridor up toward the Washington Convention Center and transforming K Street into a “grand boulevard.” The downtown of yesteryear will look nothing like the downtown of the future, Bradley predicted.

“We are de facto creating a retail district, which this is anchoring,” he said. “I think we’re becoming a regional destination. It’s not as if we’ve reached a pinnacle. This is just one step along the way of the transformation of downtown.”