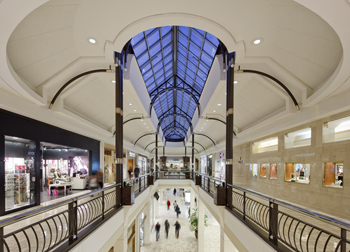 The original shoppers on the land where Tysons Corner Center and Tysons Galleria in Virginia now stand were, according to a county historian, Ice Age hunter-gatherers who were searching for food long before you were calling ahead to Founding Farmers restaurant while browsing the racks at Nordstrom.

Of course, they didn’t envision the Tysons of today. The developers who stood up Tysons Corner Center in 1968 had no idea what it would become: the area’s number-one shopping destination.

Tysons Corner Center is home to more than 2 million square feet of retail space, five department stores, including Nordstrom, above, and more than 300 shops and restaurants.

“I don’t think there was the extensive vision plan that we have today,” said Bob Maurer, senior marketing manager for the mall. “There was a lot of opportunity back in the day — 1968 — and everybody saw it, but until the success of some of that initial growth was realized, nobody knew the full potential that existed.”

As more job opportunities moved to the Virginia suburbs, Tysons flourished as a retail and office hub. It also doesn’t hurt that the unincorporated section of Fairfax County it inhabits neighbors McLean, one of the country’s wealthiest communities.

“McLean itself is very affluent and a great market to have as your base to draw from for a shopping center of this caliber, coupled with the fact that you have the Tysons-to-Dulles corridor that is high-tech and growing with office and residential [space] as well,” Maurer said. “The whole area since 1968, when Tysons first opened, has really continually grown.”

And that growth has no end date. Well, maybe it has two. One from Macerich, a real estate investment trust company that owns and operates Tysons Corner Center, and another from the county itself.

Macerich has a 10-year, five-phase plan that includes adding more retail, office and residential space. Phase 1 is ongoing and met major milestones this year, including the addition of 23,000 square feet of retail space connecting to a 1.5-acre outdoor plaza that sits 33 feet above ground level. The Tysons Tower office building opened in June, the Hyatt Regency will open its 310 hotel rooms in late January and a 429-unit luxury rental apartment building will be ready in the spring.

But the main event was the opening of the Metro Silver Line in July, with a stop that’s directly connected to the new plaza via an elevated walkway. It takes shoppers, workers and diners about 25 minutes to get from downtown D.C. to the mall.

“Tysons was once a small farming community centered around a general store at the intersection of Route 7 and Route 123,” said Sharon Bulova, chairman of the Fairfax County Board of Supervisors. “In the 1960s, the construction of the Capital Beltway, Dulles Airport and Tysons Corner Mall transformed the area from a rural community to a bustling business district. The recent expansion of Metro into Tysons is drawing people to the area like never before to shop, work and live.”

In September, the Washington Metropolitan Area Transit Authority reported that in its first two months, the Silver Line performed at 60 percent of projected ridership for its first full year of service.

“It’s expanding our reach to parts of the greater Washington area that knew of Tysons only by driving around the Beltway,” Maurer said. “We’re seeing lots of new audiences that are coming to Tysons for the first time: international tourists and travelers who don’t necessarily have their own transportation when they come to D.C., but we’re that much more accessible now, as well as residents from other parts of the city. Now we’re a Metro ride away and it’s that much more convenient.”

“Tysons is no longer suburbia,” said Michael Caplin, executive director of the Tysons Partnership, an association of citizen and business organizations working with local government on the area’s development. “With the Silver Line, we are connected with the entire Metro region and all of its amenities. Tysons now offers new amenities not available elsewhere in the D.C. region: beautiful new skyscrapers with the latest architecture, latest design plan for modern workspaces, latest in sustainable practices … beautiful new apartments … located adjacent to the Metro stations — which means people can live here and get to work anywhere without needing [a car].”

Developers are hoping the Metro expansion entices people to not only shop and work in Tysons, but also to live there. Retail and office space have long dwarfed residential offerings in the area, but that’s beginning to change as more high-end living options come online. Ovation at Park Crest, for example, became the first to offer high-rise apartment living in Tysons with luxury amenities such as quartz countertops, resort-style pool and 24-hour concierge services.

Developers are also adding green space and hiding parking garages to transform the area from a sprawling office park into a walkable, sustainable urban center.

In 2010, the Fairfax County Board adopted an ambitious plan that will make Tysons the county’s downtown, home to 100,000 residents (up from the current 17,000) and 200,000 jobs by 2050, a county spokesman said. So far, about 27.5 million square feet of new development — half of which is zoned residential — in Tysons has been approved. Currently, the area has 47.2 million square feet in development, and that’s expected to grow to 113 million in 2050, the official said.

The Tysons Partnership is also looking to 2050 to boost amenities such as parks, paths, art and other special events. This year, for instance, Tysons Corner will host a German Christmas Market surrounded by a 5,200-square-foot ice rink from Nov. 28 to Dec. 24.

When it opened, Tysons Corner Center was one of the first fully enclosed, climate-controlled malls in the area. It took up 1.2 million square feet and had three department stores and 100 specialty shops. In 1988, Lord and Taylor and Nordstrom were added — the first Nordstrom east of the Mississippi River. Now the mall has more than 2 million square feet of retail space on three levels, five department stores and more than 300 shops and restaurants in addition to a 16-screen movie theater. It’s one of the top 10 largest malls in the country.

Tysons Galleria, owned by General Growth Properties, opened in 1988 with higher-end anchor stores such as Neiman Marcus and Saks Fifth Avenue. It has 824,000 square feet of retail space.