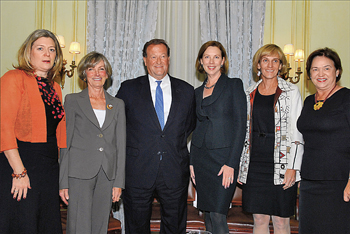 For Janet Blanchard, being the wife of the U.S. ambassador to Canada didn’t take that much getting used to. As first lady of Michigan, she already knew all about hosting official dinners and receptions. Elizabeth Berry Gips, who moved to Pretoria with her husband, the new U.S. envoy to South Africa, immediately immersed herself in national education policy — an outgrowth of her years working in international development.

But Thomas Schneider had a much tougher adjustment. Once his Dutch-speaking wife Cynthia became U.S. ambassador to the Netherlands in 1998, the globetrotting executive was forced to take a back seat and become, in his own words, “invisible.”

From Vienna to the Vatican, the experiences of diplomatic spouses are as varied as the foreign capitals to which their husbands and wives are posted. Five such spouses shared their stories at an Oct. 29 event organized by the Meridian International Center and its Council on Women’s Leadership.

“Until 1971, diplomatic spouses were almost exclusively wives. Diplomatic husbands were virtually unheard of,” said Natalie Jones, U.S. deputy chief of protocol. “Today, the demographics are very different, and the State Department has made significant strides in recognizing the diversity of families.”

Of 180 overseas U.S. embassies and other missions, she said, 130 are now headed by ambassadors, with another 50 waiting to be confirmed. And of those 130 ambassadors, 110 have spouses or partners, and 25 are males.

“We also have a number of same-sex partners. Since 2009, they have equal benefits and protections,” Jones said. “We have a number of posts considered too dangerous for spouses to travel to, such as Iraq, Afghanistan, Pakistan and Yemen. And we also have cases where husbands and wives have both served as ambassadors.”

Noting that “there is no official job description” for a diplomatic spouse, the common thread is that these spouses “have an enormous opportunity to make an impact on their host country” and among embassy staffers as well, Jones told her audience of about 40 people, which included Sharon Hardy of the Foreign Service Institute; Susan Frost, director of the State Department’s Family Liaison Office; and top State Department official Jennifer Wicks.

“Spouses are champions for cultural or philanthropic issues, and they face challenges while navigating between official and unofficial channels. They travel around the world and set the stage and tone for diplomatic relationships to flourish,” Jones said.

That was definitely the case with Blanchard, who already knew what it was like to oversee a household staff — having done so in Lansing, where her husband, a Democrat, had lived as governor of Michigan from 1983 to 1991.

“Jim had served as governor at about the same time Bill Clinton was governor of Arkansas, so public service was not new to us. We were accustomed to being in the public eye,” she said. “It also gives you great cache in your designated country when their political leaders know you’re friends with the president and the first lady.”

Shortly after settling in as the new ambassador to Canada, James Blanchard and his wife took a cross-country tour of Canada, visiting all 10 provinces in their first six weeks, making 29 stops and participating in more than 100 events along the way.

“That set the tone for our entire stay in Canada,” she said. “Because our posting in Canada was right next door to the U.S., we did not have to handhold the Foreign Service members in our embassy. They integrated easily, with some making Canada their last posting before retirement. They had their own homes and there was no compound, and minimal security risks.”

Among the guests the Blanchards entertained were several top officials of the Clinton administration, including Secretary of State Madeleine Albright, FBI Director Louis Freeh and Attorney General Janet Reno.

“Jim once asked Janet Reno if it was true she had wrestled an alligator. I wanted to die,” she said. “Without missing a beat, she said, ‘Yes, but it was a small one.’”

Being from Michigan, the Blanchards had already traveled extensively in Canada and knew the country well. And since Canada is partner in “virtually everything the U.S. is involved in” — from fishing and agriculture to defense and NAFTA — the U.S. Embassy in Ottawa is a very busy post. It oversees seven consulates across Canada, which is geographically larger than the United States despite its population of only 35 million.

“The biggest misconception about Canada is when Americans say, ‘We like Canadians, they’re just like us.’ That’s the worst thing you can say about them.”

For example, she said, “Canadians are dumbstruck by our fascination with guns. They even serve tea differently. You sit down, you have sandwiches and sweets, and then you drink your tea. Here, we just throw hot water into a mug.”

Shortly after leaving Ottawa, the ambassador wrote a book about his time there, titled “Behind the Embassy Door: Canada, Clinton, and Quebec.” In fact, the Blanchards still consider Canada their second home. “Our house is 15 minutes from the Ambassador Bridge to Windsor,” said Michigan’s former first lady.

Blanchard’s ambassadorship ended five years before the worst terrorist attack in U.S. history, so security wasn’t that much of an issue in Ottawa before 9/11. Not so for Suzanne Nicholson, whose husband Jim became U.S. envoy to the Holy See in late 2001 (and later went on to become U.S. secretary of veterans affairs).

“We arrived in Rome about 10 days before 9/11, and Jim presented his credentials to Pope John Paul II on Sept. 13,” she said. “However, because of the Red Brigade terrorist attacks during the 1970s, Italy was already very much accustomed to providing security to officials. We had lots of security.”

Al-Qaeda’s attacks on New York and Washington frustrated many of her husband’s plans as ambassador, though as his wife, she barely had time to think about it.

“For me, it was very different to be in charge of a staff and have constant entertaining responsibility. Everybody wants to visit Rome, and everybody wants an audience with the pope. We entertained, I think, at least once a day and sometimes twice a day, for three and a half years.”

The Nicholsons worked together to bring attention to the problems of human trafficking, religious freedom and international justice; they jointly organized a symposium on human trafficking that attracted people from all over Europe.

“At first, he got a lot of discouragement from the State Department and other ambassadors. They were very negative about it. But my husband was able to raise some initial seed money, after which the State Department came on board,” she said. “Over 400 participants came to his seminar, including trafficked people and ordinary citizens.”

Schneider — the only man on the Meridian panel — also got discouragement from the State Department, but for an entirely different reason.

As the husband of Washington’s new envoy to the Netherlands, Schneider was already running a successful company specializing in restructuring troubled corporations. But he was told by the State Department that he could not do business in the Netherlands because it would be a conflict of interest.

“The safest thing for me was to be seen and not heard, so for the 34 months she served there, I commuted — 66 trips to the Netherlands and 25 round-the-world trips,” he said. “My reputation was that she was supposed to be married, but nobody ever saw me. She still has very good friends over there who have never met me. It was a very strange type of relationship. I attended events, but I was literally invisible.”

On several occasions, Schneider’s wife had him fly into Amsterdam with duffel bags full of Virginia country hams so they could be served at the U.S. Embassy’s annual Fourth of July party. Schneider also organized a conference about genetically modified organisms in 1998 — an event he said “brought huge results and changed the Dutch government’s view towards GMOs, but again, it was totally behind the scenes.”

Donna Eacho is the wife of William Eacho, who helped raise more than $500,000 for President Obama’s election campaign and was rewarded in 2009 with a posting as U.S. ambassador to Austria.

“The entire four years we were there, I never got tired of the honor when people would address you as the representative of your country,” said Eacho, who returned to the Washington area in 2013. “I never thought it was corny.”

Eacho said the role of the spouse is totally undefined.

“You’re not an employee of the State Department, so there’s no job description. That’s also because the people who work in our embassies have a lot to do, on a limited budget. They don’t want to have to spend their resources on pet projects of ambassadorial spouses,” she said.

On the other hand, “people are pretty happy in Vienna, and you can’t really overstate the importance of just showing up. Our predecessors had to leave the post early, so there was a certain wariness that Austria didn’t matter to the U.S. But once they saw us embracing our role and showing up for every major cultural and sporting event, they were thrilled — and everybody wanted us at their events and to get on our good side.”

Eacho said that as ambassador, her husband “was able to get through a number of treaties that had been stalled for years. Austria is typically very opposed to sanctions. At the time, Austria was a member of the U.N. Security Council, and we needed their vote on sanctions against Iran. They were dead-set against it, but we turned them around in the end. A lot of that was behind the scenes.”

Of the five people on the podium, Liz Berry Gips was the only one whose spouse was named U.S. ambassador to a developing country. The Yale School of Management graduate recalled how she and her husband, Donald Gips — a former leader on the Obama presidential transition team — arrived in Pretoria just as South Africa was preparing to host the 2010 FIFA World Cup.

“We moved from Boulder, Colo., to South Africa with our three boys. The school year had just started. We were fortunate that our boys really embraced the experience,” she recalled. “I’d been doing international development work and I’m impatient by nature, but I went to South Africa eager to contribute. Looking back, I realized that the spouse role is ambiguous, and you do have to gain people’s trust and find your niche. In my case, it ended up being a very rewarding experience.”

During their first year in Pretoria, the U.S. Agency for International Development got some funding to start an education program in South Africa, and the ambassador’s wife was invited to join the new team. She accepted the job without pay and loved it.

“Because I was the ambassador’s spouse, I had access to a vantage point and the ability to leverage the role in a really unique way,” said Gips. “I brought South Africa’s minister of education, the head of the teacher’s union and some NGO leaders to D.C., where they met with the U.S. secretary of education [Arne Duncan] and other officials. That paved the way for some really big policy decisions in South Africa. I was able to put together a public-private partnership with a large bank and foundation that tripled the money the U.S. government had.”

Despite South Africa’s notoriously high rate of violent crime, the Gips family did not have a particularly heavy security detail.

“Security is at the discretion of the host government. My husband had a driver and a very protected car, and I drove myself,” Gips recalled. “We lived in a beautiful residence that had a lot of security, but my kids did service work in the nearby townships. We all took the same precautions that all South Africans take.”