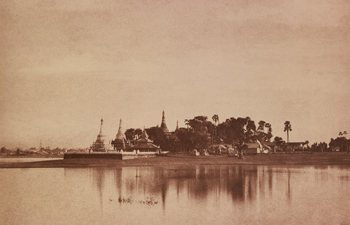 More than 60 of Linnaeus Tripe’s photographs on display at the National Gallery of Art reveal a stunning picture of 19th-century India and Burma, including “Madura: The Vygay River, with Causeway, across to Madura.”

When Linnaeus Tripe first visited India and Burma (now Myanmar) in 1839, he was a member of the British military. When he returned in 1854, he was armed with something more: a camera.

Photography had just emerged when Tripe, a Devonport, England, native, visited the Great Exhibition in London in 1851 while on leave from the army. He embraced the new technology and his success with it is the subject of “Captain Linnaeus Tripe: Photographer of India and Burma, 1852-1860,” on view at the National Gallery of Art.

The exhibit displays about 60 of his photographs in a chronological retrospective that aims to acquaint American audiences with Tripe and his pioneering work. (The exhibition travels next to the Victoria and Albert Museum in London.) The images show peaceful landscapes and religious and secular sites in India and Burma, several of which are now destroyed. Many of the pictures are the first taken of important monuments, shrines and temples there, said Sarah Greenough, senior curator and head of the Department of Photographs at the National Gallery.

“Photography was just bursting on the scene in India when he began to work,” Greenough said.

Two of her favorite Tripe photos are “Rangoon: View near the Lake” and “Madura: The Vygay River, with Causeway, across to Madura” because they both exemplify how looking at one image from multiple viewpoints can enhance the understanding of the time period.

“It’s an extraordinary, beautiful picture,” she said of the first. “If you looked at it and didn’t look at the background, you might think that Tripe was perhaps back in his native England and making simply a picturesque landscape because it shows this little path in the foreground, leading our eye into the background. There’s lovely grass and shrubs on either side; it’s framed very beautifully. But as soon as you look in the background, you see this pagoda rising up in the distance, and it shows, I think, this sort of layering of history and a sense of place in his pictures, which is what often makes them so highly charged.”

The pagoda was a prominent site for Burmese Buddhists and a number of key battles between British and Burmese forces in the 1800s. Tripe’s regiment was engaged in fighting near there, in fact.

That’s why “when Tripe made this picture in November of 1855, he could bring to this image a full sense of the history of the place and this layering of the collision between the English and Burmese people,” Greenough said.

In “Madura,” the causeway represents a sacred Hindu crossing site leading to a temple. Hindus believed that the crossing site was a gateway that enabled people to pass from a worldly state to transcendence.

“It’s such a graphically strong image,” Greenough said. “I think you see how Tripe’s training as a military surveyor comes very much to the fore in the construction of the image” because he lined up the posts on either side almost “like notes on a musical score leading our eye to the background.”

Tripe, who rose to the rank of captain in the British military, worked for the East India Company at a time when it was the world’s largest and most powerful commercial enterprise — and the virtual ruler of India and Burma. According to the National Gallery, administration of this vast area created a need for collecting data, maps, surveys, drawings and eventually photographs.

Tripe combined his surveying skills with artistic vision to shed light on unknown cultural treasures. For example, “Tanjore: Great Pagoda, Inscriptions around Bimanum,” a 19-foot panorama, is the first of its kind in photography. Tripe circled around the Brihadishvara Temple in India taking 21 separate exposures, which he joined into a final composition that depicts the ancient Tamil inscriptions around the temple’s base.

In addition to his artistic vision, the photos represent Tripe’s innovative use of an emerging technology. To contend with the technical challenges of a fledgling industry and the effect of the area’s heat and humidity on photographic chemistry, Tripe made paper negatives, which he usually waxed to make more transparent and add greater detail. Paper negatives were outdated by then, but “the waxing of the negative was more of a newer invention,” Greenough noted.

“Photography at this point was still very much of a handmade process,” she added. “He made his own paper negatives; he made his prints or directed others to do it, who were working for him. It was a very, very laborious process.”

Tripe was part of a peace-treaty expedition in 1855 to Upper Burma, where he made more than 200 negatives. At the group’s destination, the royal city of Amerapoora, he made almost 100 negatives; 26 photographs from this trip are on display.

The next year he was appointed photographer to the Madras Presidency, an administrative British subdivision covering most of southern India, making him the first person to photograph the area’s holiest temples and British efforts to modernize the region. There, he made more than 290 large-format negatives, which yielded 17,745 prints, 30 of which are on display.

Tripe’s prolific photography career eventually teetered out as the influence of the East India Company waned in the late 1850s and the British government made India a crown colony. Budget cuts forced Tripe to close his studio in 1860 and he eventually left India in 1873.

But his photographs live on, more than a century after Tripe’s passing. Greenough and her colleagues first came up with the idea for the exhibition eight years ago and have been actively pursuing it for the past four. She hopes visitors leave with a better sense of Tripe’s artistry, photography’s history and the embattled history of the region he captured.

through Jan. 4
National Gallery of Art
on the National Mall between 3rd and 9th Streets at Constitution Avenue, NW
For more information, please call (202) 737-4215 or visit www.nga.gov.