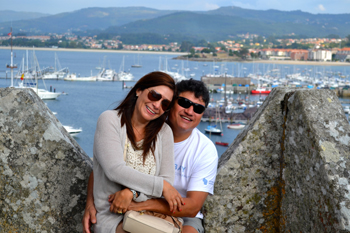 He drives a motorcycle, loves to go scuba diving with his family and makes dark beer in the basement. His wife, Ecuadorean Ambassador Nathalie Cely Suárez, rides on the back of his Yamaha Super Ténéré to see the foliage in the Blue Ridge Mountains and motorbikes with him through Europe. She also scuba dives and drinks his homebrew.

Ecuadorean Ambassador Nathalie Cely Suárez and her husband Iván Hernandez, an advisor at the World Bank, both specialize in economics and development and share a love of travel, motorcycling and scuba diving.

Part of the reason for their adventurous, approachable demeanors may have something to do with the fact that this is their first diplomatic posting abroad. She is a presidential appointee and an economist who previously served as Ecuador’s coordinating minister of production, employment and competitiveness. An international consultant for the Inter-American Development Bank, Cely was also president of Stratega, a firm that helps micro and medium enterprises, and president of Edúcate, a foundation that works to improve education through information and communication technology. Along the way, she got married and had two boys, Iván Jr. and Daniel.

As a development economist who worked in finance, sales and marketing back home, Iván Hernandez is currently an Ecuador advisor at the World Bank in D.C. “I walk to work every day, except when it’s really rainy or snowy,” he told us. “It’s a beautiful walk. It only takes me about 25 minutes.”

Among his varied positions in Ecuador, he worked for Banco Bolivariano, Transfiec Investment Bank and the country’s Department of Technological Innovation and Competitiveness. He was in charge of marketing for a 300-outlet mall; oversaw a business plan for a biotech lab in Guayaquil; was president and CEO of a floriculture exporter in Quito; and studied the intellectual property impact of a free trade agreement with the U.S. on the pharmaceutical and agriculture chemicals industry. Hernandez also headed up Stratega and Edúcate alongside his wife.

Although they both went to Harvard University for postgraduate work (she studied public administration and he specialized in management), they did not meet there. “We met in Ecuador in 1990,” Hernandez said. “Nathalie’s sister was the girlfriend of one of my best friends. Nathalie and I got to know each other with a two-year courtship.”

He also studied how to make beer in college. “I had a business professor from Turkey who taught me. Drinking age was still 18 then,” Hernandez recalled. “Five years ago my sister brought me a beer-making kit. Now I’m hooked on good beer. Next I want to try making wine.”

Today, their two boys are in college: Ivan Jr. is a sophomore at Penn State, while Daniel is a freshman at George Washington University, living in the dorm. “For three months now we have been an empty nest,” Hernandez said. “We wanted Daniel to live in the dorm to get the full experience. The last two years they were at St. Albans.”

Fernandez, who holds a Ph.D. in development economics, likes Washington for its “nice people of different cultures and the great museums. I’ve been to all the museums already. I like Air and Space the best. I walk or take the Metro…. You can walk everywhere from our residence.”

One of their favorite things to do is pick a random Metro station and explore a whole new part of the area for four to five hours with lunch. “We’ve gone to Clarendon, Eastern Market, Rosslyn. I do some research ahead of time. We also try not to miss the wine and beer festivals around the Washington area. We just went to the Brewfest in Manassas, [Va.].”

As much as he likes Washington, his heart belongs to his homeland. “Ecuador is a paradise on earth, both weather-wise and things to do — great for adventure and sports. We are known for the Galapagos [Islands]. We are closer than Europe, only a four-hour flight from Miami. Half is the Andes region with Quito in the highlands. Then Guayaquil is along the coast with seafood. And the Galapagos, only a two-hour flight away. This is one place you have to visit before you die. It is marvelous, a living museum. Friends cry when they leave [the islands]. There is such harmony of nature and human beings.”

The second reason to go: “We have wonderful cuisine,” Hernandez said. And despite perennial tensions between the United States and the leftist government of Ecuadorian President Rafael Correa, an economist who took office in 2007, Hernandez says people-to-people relations remain strong.

“Half a million Americans left the U.S. to retire in Ecuador. The living cost is better [and] it is spring-like weather all year round. It is the second spot after Panama” for Americans to retire outside the United States.

Back in Washington, Cely has been a vocal advocate for Correa’s economic policies, which have slashed poverty and unemployment but frightened away international investors and drawn comparisons to other Latin leftists, such as the late President Hugo Chávez of Venezuela.

In a July 2013 cover profile in The Washington Diplomat, Cely defended her president. “Sometimes in the United States, President Correa is wrongly portrayed as a person who doesn’t appreciate American culture. But that’s totally untrue because the president really admires this country’s deep values,” she said, noting that he attended the University of Illinois.

Cely herself spent time in the U.S. when she was young — in Macedonia, Ohio, in her teens — while her husband spent much of the 1980s in Charlotte, N.C.

Today, their lives in Washington are very different. Hernandez said that diplomacy has its pluses and its minuses.

“It’s good if you have one to two events a week — that’s wonderful. But if you have them too frequently, four or five times a week, you come home late too many nights and everyone still has to work the next day,” he said, noting that embassies “offer different and wonderful food and drink, but you can’t burn enough calories for all those events.”

“I signed up for three months at the sports club but I never went once so I canceled my membership. I keep walking and try to close my mouth,” he quipped.

When they can both get time off from their busy jobs, they love traveling together to beautiful scuba-diving spots around the world. They particularly like the Philippines and Hawaii.

Another annual excursion is their weeklong bike trip through Europe. “Nathalie’s sister and our brother-in-law go with us. We rent two motorbikes and just start out,” Hernandez said. “We make no hotel reservations. We just see where we are at the end of the day. If a place has a lot of people, we try to eat there. It takes the stress out of the trip, trying to get somewhere by a certain time, and gives us the freedom to stay wherever we want.”

One of the things he likes best about their motorbike adventure is that with “only two small luggage compartments, it cuts out shopping.”

“How wonderful is that for a man? No shopping for eight days!”