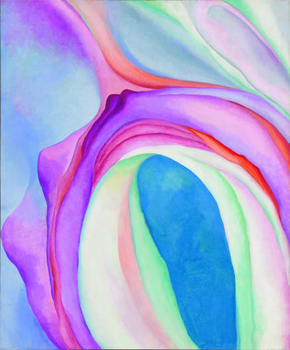 Georgia O’Keeffe is best known for her iconic and instantly recognizable paintings of the dramatic landscape in the American Southwest. High-mountain deserts punctuated with deer skulls. Lush, blooming (some say seemingly sexualized) flowers. Sandy-colored adobes framed by azure blue skies. These are images that millions of people around the world associate with the long-underrated painter.

But O’Keeffe, who was raised in Wisconsin and spent much of her adult life in New Mexico, was also a talented abstract artist. Now, the Phillips Collection is showcasing O’Keeffe’s voluminous abstract work in a new exhibition titled simply “Georgia O’Keeffe: Abstraction.”

The exhibit includes more than 100 paintings, drawings and watercolors by O’Keeffe, dating from 1915 to the late 1970s. As a bonus, the exhibit includes a dozen highly personal photographic portraits of the artist by her husband, famed New York City photographer Alfred Stieglitz. The series of gelatin silver prints give the viewer a deep glimpse into O’Keeffe’s sensuous, playful personality and imbues the entire exhibition with the artist’s spirit. A series of letters is also on display.

The O’Keeffe paintings on view here unfold largely in chronological order. The exhibition begins around the year 1915 with the artist’s radically inventive charcoal abstractions. The effect of these early charcoal abstracts is almost three-dimensional. She brings the viewer into the art, creating something physical and visceral.

Reportedly frustrated with her inability to find words to convey her feelings, O’Keeffe decided to use art to express her emotions. She touches on this theme in one of her letters to Stieglitz. “I make them — just to express myself — things I feel and want to say — haven’t words for,” O’Keeffe writes.

“It is impossible for me to put into words what I saw and felt in your drawings,” Stieglitz responds. 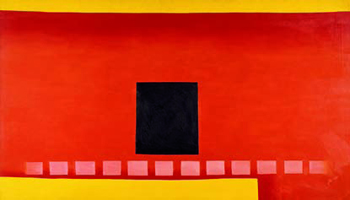 As she defined it in 1923, her goal as a painter was to “make the unknown — known. By unknown I mean the thing that means so much to the person that he wants to put it down — clarify something he feels but does not clearly understand.”

Many of her forms are open to interpretation. In one piece, the charcoal lines appear as a phallic symbol. Viewed with a different perspective, they could be interpreted as a veiled female figure with her head bowed.

Yet O’Keeffe didn’t always agree with the widespread sexualized readings of her work, and she began introducing more recognizable images into her repertoire in the mid-1920s. As she wrote in 1924, “I suppose the reason I got down to an effort to be objective is that I didn’t like the interpretations of my other things,” referring to her abstractions.

As the exhibition progresses chronologically, you see O’Keeffe shift from abstraction to more realism. The vivid “Music: Pink and Blue No. 2,” an oil on canvas, is a masterpiece of shading. O’Keeffe lays down pain one layer at a time. There is no overlap and nothing is muddied. “Yellow Sweet Peas,” a gloriously vibrant, light-strewn dynamo of abstraction, practically hums on the wall.

In 1930, Georgia O’Keeffe painted a series of six canvases depicting a jack-in-the-pulpit plant that is included in this exhibit. The series — marked by dark blacks, blues, greens and browns — begins with the striped and hooded bloom rendered with a botanist’s care, continues with successively more abstract and tightly focused depictions, and ends with the essence of the jack-in-the-pulpit, a haloed black pistil. The paintings are so vibrant, viewers almost have the feeling that if they look away, the image might change. 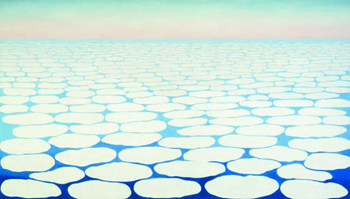 It’s worth noting that virtually all of O’Keeffe paintings are minimally framed with either thin silver metals or a small clamshell design. The effect is that the viewer hardly notices the frame, allowing O’Keeffe’s glorious colors to burst into view.

Beginning in 1929, O’Keeffe spent the first of many summers working in New Mexico before moving there permanently in 1949. While spending part of each year in New York and New Mexico, O’Keeffe was inspired to paint the architecture, landscape and natural forms that surrounded her. 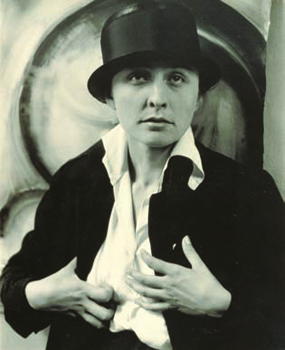 Although much of her work at this time drew upon recognizable subject matter and specific landscape configurations, it continued to be guided by abstract principles. The pieces O’Keeffe painted from roughly 1950 to 1970 are less earthy and organic and more shaped, yet retain elements of her earlier abstraction by introducing flat, geometric planes of color that extend from one edge of the canvas to the other. For example, “Black Door with Red” contains a black square bordered by pink rectangles and yellow bands against a red backdrop.

A vivid, practically garish piece called “At the Rodeo,” based on her experience at a Santa Fe rodeo, yanks the viewer straight into the Southwest. Purely abstract, one can sense a fluid movement of dance and the famous colors of the Indian Kachina dolls.

The final paintings in the exhibition are particularly poignant. They represent the end of O’Keeffe’s painting days, when she was suffering from macular degeneration. Here, she uses thicker paper for her watercolors because it has a more toothy texture that prevents the colors from running.

But even in her later years, O’Keeffe’s singular style was evident. And it’s clarified in fine fashion at the Phillips Collection.