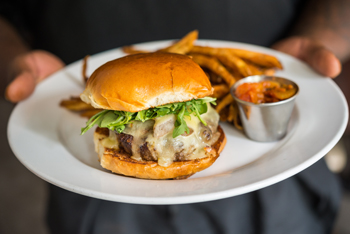 Chef Dwayne Motley, below, has helped Nage stand out with simple but stunning dishes such as the Angus burger.

Since opening in 2006, Nage in the Marriott Courtyard Embassy Row has been quietly building up a local following among diners looking for good food at reasonable prices in a comfortable, casual bistro setting.

Nage, a younger sister of the popular Rehoboth Beach eatery of the same name, has seen a number of changes since opening. Last year, owner Josh Grapski transformed the smallish space by replacing the rather staid and slightly oppressive red-and-beige color scheme with a lighter, more contemporary look. Reclaimed barn-wood walls sport patches of living moss, while light earth colors are illuminated by Edison light bulbs that give the space a cheery glow and a more relaxed feel.

Staff has changed along the way as well. In January, Dwayne Motley joined the team as executive chef, replacing Miles Vaden. A Washington native, Motley spent the last decade honing his skills in New York working under several renowned chefs. His experience cuts across international cuisines and shows up in his choice of ingredients and the ease with which he imports techniques to create his essentially American dishes.

Motley’s menu wisely retains some of Nage’s signature dishes, such as the wild mushroom baklava, a savory-sweet combination that marries chopped mushrooms and pistachios with tart berry compote and pungent chevre cheese. Another favorite holdover from the previous era is the lobster mac-n-cheese made of orecchiette pasta in a mornay sauce of three cheeses, English peas and aromatic tarragon. 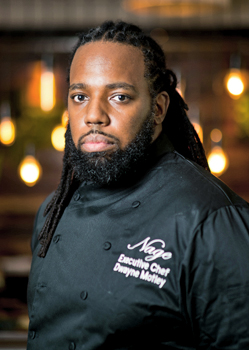 Seafood features prominently on the menu, not surprising given its original beach location. Both the Rehoboth and D.C. restaurants offer Nage’s staple dish: seafood a la Nage, a massive combination of shrimp, clams, mussels and fish in a tomato confit with fennel, fingerling potatoes and a saffron broth. For smaller seafood options, there’s a salmon ceviche with green apple, jalapeno emulsion and cilantro, as well as a dish of eclectic grilled gulf prawns with Thai chilies, cilantro and dirty basmati rice. Recent seafood main plates have included perfectly cooked striped bass with mushrooms and a lovely maple tamarind jus, as well as plump Chesapeake crab cakes paired interestingly with sweet potato, mustard greens and jalapeno remoulade. The only disappointment has been the rainbow trout, which has been a bit dry.

While Nage’s menu is fairly small, it is quite varied for most appetites. For meat eaters, a hearty grilled Berkshire pork chop is thick and moist, served classically with Brussels sprouts, red cabbage, sweet potato and a bacon jus. The pan-seared rib-eye steak is equally straightforward with cipollini onion, potato, spinach and a bourbon peppercorn butter that adds an elegant dimension to the dish. Braised short ribs almost melt off the bones while their plate mate, Yukon gold potato puree, redefines the humble mashed potato.

In an interesting approach, chef Motley brines chicken in sweet tea before cooking, a technique that leaves it very tender, with a faintly exotic note. As with the other meat entrées, the chicken’s side pairings — savoy cabbage, chanterelle mushrooms and caramelized onion — are also skillfully chosen. 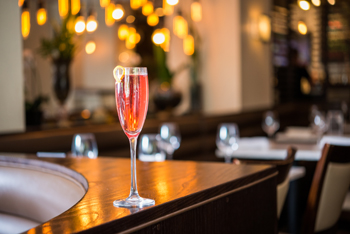 For diners that want simpler creations, Nage offers two burgers: A black bean veggie burger with walnuts, avocado and smoked onion cheddar is a tasty vegetarian option, while the Angus burger, prepared with smoked onion, mushroom duxelle, Vermont cheddar and tomato jam, is huge, superb and rivals any burger in the city.

Motley works just as well with vegetable dishes, making Nage a haven for meat-free dining. Among several interesting salads, the lightly cooked cauliflower salad is tossed in buttermilk vinaigrette with quinoa and wild arugula. The kale salad, with its unusual combination of black and green kale, dried currants and roasted pine nuts in a citrus vinaigrette and pecorino Romano, has a distinctly Mediterranean appeal. But perhaps one of the best salads on the menu is the hearty Brussels sprout salad. With cabbage, bacon, walnuts, pecorino cheese and a warm bourbon vinaigrette, it is the perfect start for a fall meal. The apple salad, with fennel, radish, red mustard greens, goat cheese and cider vinaigrette, is lighter than the Brussels sprout, but also has a cozy fall feel to it.

Motley has created several other dishes that capitalize on the vegetables that are just coming in season. He tops a pumpkin flatbread with arugula, smoked mozzarella and pumpkin oil for a simple starter, while the stuffed Jack B. little pumpkin entrée offers fall root vegetables, quinoa and cranberries in a spiced cider gastrique.

Even the desserts reflect the shift to hearty fall ingredients and rich spices. The crème brulee is made with heirloom pumpkin, cinnamon and all spice. Fresh fall-harvested pecans end up in a pie punched up with maple and bourbon. The season is also in full swing thanks to Nage’s signature campfire sundae. With smoked vanilla ice cream, marshmallow ice cream, chocolate sauce, crushed graham crackers and toasted marshmallows, it’s just too sweet and sticky to eat on a hot summer day, but with the cooler air and memories of s’more-filled campfires, the dessert comes into its own. 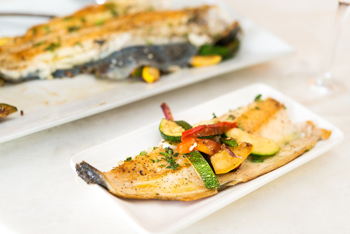 otel restaurants face a distinct challenge that other restaurants do not. Not only do they typically have to serve three meals a day, but they also have to cater to a broad audience that has not necessarily sought them out for their cuisine but rather for their convenience. To be profitable, they need to figure out how to attract both hotel guests and a local clientele.

Nage’s approach is good example of how this can be done effectively. The D.C. bistro is a bit less expensive than its Rehoboth Beach counterpart and offers dishes that are simpler with a broader appeal. Nage’s more casual feel makes it an easy place to drop in for a quick bite whether you are a hotel guest or just in the neighborhood. It’s also a nice place for a drink, with a bar menu that includes some enticing creations — such as the Pears Morgan, made of vodka, house-made pear puree, orange juice and triple sec, as well as the Don Corleone mixed with Francis Coppola Sofia rose wine, elderflower liqueur, orange bitters, rose water and sparkling wine. The staff is friendly, helpful and really seems to enjoy being there, which makes the whole place feel comfortable and inviting.

Perhaps the biggest challenge that restaurants in hotels face is that they are in hotels, which for years weren’t exactly synonymous with interesting, innovative food. That, of course, has changed with the addition of destination restaurants helmed by celebrity chefs inside some of the city’s top hotels, from the Four Seasons to the St. Regis. Nage may not be a huge name, but it has quietly created a home for itself among D.C. diners and visitors alike.