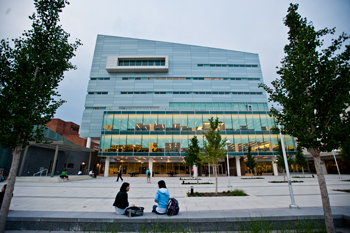 In a world filled with grim images of war and downbeat assessments of peace, the seemingly interminable conflict in Syria is also being viewed through the surprisingly long lens of education. Marc Gopin of George Mason University’s School for Conflict Analysis and Resolution in Arlington, Va., is taking students out of the classroom and putting them on the ground in hotspots around the world, offering them a firsthand look at a civil war that has by some estimates killed nearly 300,000 people, if not more, and displaced millions.

As founder and director of the school’s Center for World Religions, Diplomacy, and Conflict Resolution (CRDC), Gopin’s innovative seminars feature lectures plus fieldwork called service learning. Often involving Middle East conflicts, they’ve taken students from the United States and Canada to Israel and the Palestinian territories, Turkey, Jordan, Indonesia and the Caucasus, as well as the Balkans and Northern Ireland. Students study a region and its difficulties in depth, observe approaches to conflict resolution and civil development, and directly interact with grassroots groups living and working in a troubled terrain.

CRDC’s most recent such seminar, “Approaches to Conflict Management and Resolution: Field Work with Syrian Refugees,” took a group of students to Jordan this past August. The course is taught by Gopin and Hind Kabawat, CRDC’s director of interfaith peacebuilding and a member of the Syrian High Negotiations Committee in Geneva. It has attracted more than 100 graduate students from a dozen universities in the three-plus years of its existence — including local students from Georgetown, George Washington University and American University, according to Michelle Everson, associate director of CRDC.

The idea is to train future negotiators, policymakers, activists or business people so that they can be well-versed in the intricacies of conflicts or post-conflict zones. 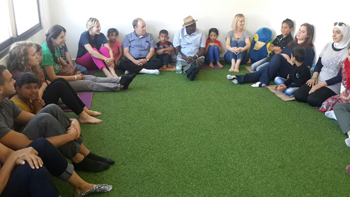 George Mason University professor Marc Gopin leads a discussion at the Happiness Again Malki Center, a children’s trauma treatment facility in Jordan, as part of a course working on with Syrian refugees.

Looking toward that future, Gopin and his colleagues also sponsor conferences, workshops, online classes and business development programs. They host diplomats, scholars and peacemakers from around the world; the faculty and staff also engage in social media outreach, practical peace building and scholarly research.

As a scholar, Gopin specializes in the positive and negative roles that religion can play in conflict resolution. As a practitioner, he has taken part in back-channel negotiations to bring together parties not able to meet in public. And as a teacher, he has taught lessons on peacebuilding strategies that can be used in “intractable” arenas.

Gopin’s approach to international conflict resolution starts with the individual, not the nation.

“Most conflict resolution is focused on state-to-state actors,” Gopin recently told The Diplomat, saying that while such efforts “may be doing good work,” it’s “a difficult and complex process to bring these efforts to the grassroots level.”

In contrast, Gopin starts at the bottom to effect change at the top. “I’ve taken social network theory and made it into peace building. We create a series of partnerships that build trust” and can support a healthy society, he said.

Efforts of this kind are dramatically underfunded, Gopin argues. “Who is paying to create a civil society in Syria?” He says that while the “key to violence mitigation is reciprocity and trying to figure out a way to take in each other’s position,” the amount of money devoted to civil society in the Middle East is “miniscule” while “billions for weapons systems” pour into the region.

Underfunded and undeterred, CRDC programs are hammering away at peace and development “on the frontlines in both Turkey and Jordan.” They’re working with both battle-weary Syrians and eager young Americans.

One of those U.S. students is Caroline Chewning, 28, a former political science undergraduate who grew up in Middleburg Va., has lived in South Africa and is now a graduate student at George Mason. She works in international government relations at United Technologies in D.C. and the company provided her with a scholarship to take the Jordan course. Chewning, who said she is interested in the Middle East and refugee work, was one of nine students enrolled in the summer program. (A previous March course had 35 students.) 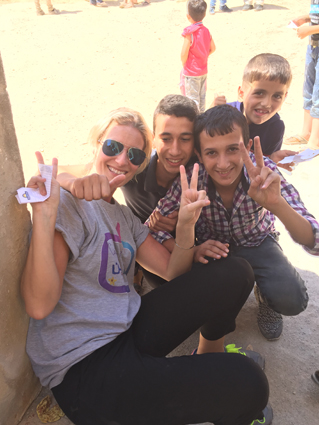 Caroline Chewning, a graduate student at George Mason University, poses with children during a field trip to Project Amal ou Salam, an NGO in Jordan that means “hope and peace” and works to educate Syrian refugees.

CRDC’s approach is important, Chewning said, because her generation is more aware of global conflicts and is “more willing” and able to address them. That includes going in to “plant the seeds” of peace and development, she said, and then giving locals the tools to do the rest.

Chewning’s travel companion, Elizabeth O’Hara, 23, is a master’s degree student studying democracy and governance at Georgetown University with an emphasis on economic issues and Eastern and Central Europe. This was the second class she’d taken in the program; the first took her to Bosnia.

O’Hara said she liked CRDC’s focus on partnering and listening, recalling that most of the Syrian adults she met in Jordan told her, in effect: “We don’t want your sympathy. We want your help.” O’Hara said that news coverage of war in the Middle East had a “desensitizing effect” and that the CRDC course was one way to counter the apathy.

Students spent nine days in Jordan, where they listened to lectures, made various site visits in the field and engaged with the local population.

Mindful of safety, Everson noted that CRDC follows guidance from the State Department, which currently does not have a travel alert or warning for Jordan. The school also encourages students to travel in groups during their free time, devises a communication strategy if something goes awry and teaches them how to be respectful in a host country.

In addition to field trips, the Jordan course included a detailed syllabus and research paper that needed to include “bold recommendations” for conflict-resolution projects or interventions.

Students visited five sites serving Syrian refugees, each chosen for its effectiveness and élan — including schools, hospitals, a trauma center for children, a women’s center and an adult rehabilitation program. The visits appeared to provide some of the program’s most enlightening experiences, starting with an Aug. 15 field trip to Project Amal ou Salam, an NGO that means “hope and peace,” in Jerash, located about an hour and a half from Amman.

“The hallmark of our program is the partnership with Project Amal ou Salam,” Everson told us by email, “founded by Nousha Kabawat, a graduate of our School for Conflict Analysis and Resolution. Project Amal ou Salam supports Syrian children’s education in Turkey, Jordan, Lebanon and Syria” and has touched the lives of at least 5,000 children.

“We visited Amal ou Salam twice,” Chewning said, noting that the founder, Nousha Kabawat, is Hind Kabawat’s daughter. There, the children, ages 7 to 15, were divided into two classrooms where both academic and emotional needs were addressed. The visitors shared letters with the Syrian refugees from students in Bosnia affected by the Balkan wars, a project organized by George Mason graduate Asia Odum. 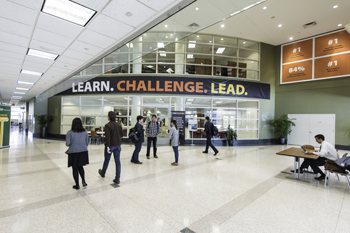 George Mason students roam the library at the Antonin Scalia School of Law on the Arlington campus.

The messages to the Syrian children were simple and moving: “Don’t give up hope.” “It will end.” “It always gets better.” “We send you love across the world.”

Equally moving and illuminating, both Chewning and O’Hara said, was a midweek visit to a children’s trauma treatment facility in Amman called the Happiness Again Malki Center. “It treated children who had been kidnapped, witnessed kidnappings and beheadings and had arrived extremely fearful,” O’Hara explained.

The adults, who brought Play-Doh along with them, partook in enthusiastic face painting with the children and discussed their favorite colors with the help of translators.

“You’re sitting at a table with a kid who’s seen her sister get her head cut off. You can’t take the memory away but you can bring in positive ones,” Chewning observed.

It was clear to the CRDC students that “the point is to keep hope and positivity and light” in these children’s lives, Chewning said. “It breaks your heart but gives you a sense of motivation: How can you solve the issues at hand so things like this don’t happen in the future?”

On Aug. 16, the CRDC group had a meeting at the Women’s Center in Amman. The visit dovetailed nicely with Gopin’s stated belief that “women’s empowerment leads to less violence.” It also matched up with Hind Kabawat’s work to empower women and her role in the Syrian peace talks. 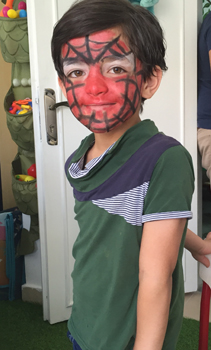 Children enjoy face painting as part of their therapy at the Happiness Again Malki Center in Amman.

“Violence in conflict does not discriminate. Men, women and children suffer from starvation, bombings, forced disappearances and torture. They equally experience traumatic loss when driven out of their homes,” Kabawat wrote in a July 21 Huffington Post piece along with Swedish Foreign Affairs minister Margot Wallström.

The emphasis on equality in developing solutions to conflicts was vividly illustrated at the Amman women’s center, where Syrian, Palestinian and Iraqi women, led by Kabawat, held a brainstorming session with the U.S. student group.

They wanted the Americans’ entrepreneurial advice on their small-business ventures, which included making soap or chocolate to sell in Jordan — advice they said they could also pass along to their daughters.

“At first it was very quiet,” O’Hara recalled. “It was a very religious group and everyone was covered — eyes only, black gloves. But as it proceeded, more and more women spoke up and one became very vocal. She joked that when she goes back to Syria, she’s going to be mayor of her town and shouted out workshop ideas focused on micro-financing for small businesses, women’s self-defense classes, leadership and conflict resolutions skills and study skills for the children.”

“In the end some of us were singing and dancing,” Chewning added. “It’s amazing the connections you feel even when the differences are so big.”