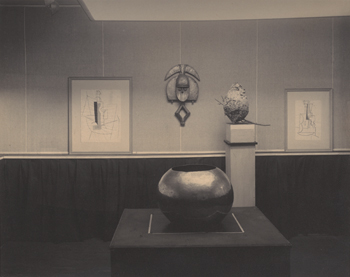 The National Gallery of Art received a windfall when a judge gave it the right to take over the Corcoran Gallery of Art’s expansive, world-renowned collection (George Washington University gained control of its school for the arts). Supporters cheered the decision, saying it would rescue and ultimately renew the Corcoran, which had been beset by financial woes. Critics say the breakup cemented the demise of the city’s oldest private museum.

The merger of pieces from the Corcoran Gallery of Art with the National Gallery of Art’s collection is on display in “Intersections,” which features photography by pioneers such as Alfred Stieglitz.

Either way, one museum’s loss is another’s gain — and, in the case of a new photography exhibition, the viewer gains some perspective as well.

“Intersections” brings together photographs and videos from the National Gallery of Art and the Corcoran in a merger of opportunity that has enriched and enlarged the newly joined collection.

The exhibition spans 100 pieces from the two museums by prominent artists from the 1840s to today, anchored by two pioneers from each collection: Englishman Eadweard Muybridge (1830-1904) and American Alfred Stieglitz (1864-1946). It is arranged around several themes that trace the exceptional and focused talents of a number of key figures during the emergence of photography as a distinct art form. While the show ostensibly highlights the photographic personalities who engaged both the eye and mind, it also acts as a history course on the evolution of the medium.

The themes — movement, sequence, narrative, studio and identity—arrange themselves organically, pushing photography ever closer to both art and documentary, surrealism and abstraction — qualities that bore the imprint and pulse of painting and sculpture but also remained unique to the photography.

Two seminal figures appear in every section. Muybridge is famous for his photographic studies of movement and early work in motion-picture projection. His images depict the sequential multiplicity of the human form, and sometimes animals, moving in a straight line and freezing the act of action frame by frame. Meanwhile, Stieglitz championed photography as art, encouraging and inspiring others to embrace the medium. Stieglitz was a giant with a persona and personal history to match his artistic gifts, including being the boon companion of painter Georgia O’Keeffe, herself no slouch in the big personality department. He frequently made her a subject for his lens, haunting examples of which are in this exhibition. 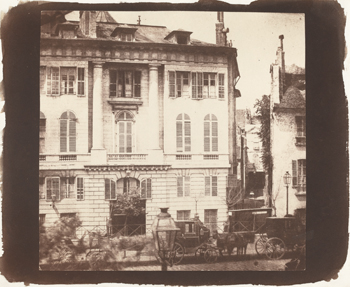 The sections seem highly literate and articulate, but even if you’re not inclined to study the strands of narrative on the wall text, there is no denying that this is a rich, well-organized exhibition. It’s a treasure trove of some of the most familiar — and not-so familiar — names in photography, beginning with Stieglitz and Muybridge, whose running, jumping, moving, rolling, dressing and rearranging figures accompany every section.

There are other highlights as well, such as Alexey Brodovitch’s dazzling suggestion of dance in a black-and-white 1930s shot of the Ballet Russe Monte Carlo; or Sasha Stone’s flippant capture of an acrobat in high form; or William Henry Fox Talbot’s energetic portrayal of a Paris boulevard. Not every image is a heart-stopper, but exceptionalism abounds, especially in the clean, sharp shots that dig into abstraction and come out beautiful.

When it comes to narrative, 20th-century photographers — faced with an abundance of markets, including new magazines that emerged in the 1920s — tended to go to the haunting, dark and personal. This is the age of Robert Frank, a documentarian with an edge that could wound, and of Nan Goldin, the chronicler of life, including hers and those of her companions, whose images are bound by dysfunction, attitude and naked honesty. 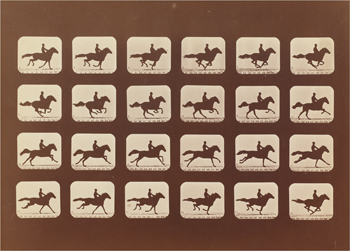 Through portraiture, many photographers captured the lives of communities. James Van Der Zee’s pictures are the physical reminders of the Harlem Renaissance as much as Langston Hughes’s poems are. Meanwhile, Irving Penn uses the gaze of natural light to frame the people of Peru during his trip there. And then there is August Sander, a German photographer who had the ambition to capture an entire country during the days of the Weimar Republic. His portraits of ordinary working people (330 exist) were meant to make Germany universal. The Nazis stopped the project because the people — bricklayers and the like — did not resemble the Aryan ideal.

In the section on identity, there is a striking photograph of young female triplets. Who else but Diane Arbus could make such a shot seem at once glorious and weird? She had a gift for making the familiar seem strange, and the strange seem familiar. “Identity is what’s left after you take away everything else,” Arbus once said.

In this exhibition, photography functions precisely this way, stripping away our expectations, adding to them, focusing them and transforming them through the redefining prism of a camera.

on the National Mall between 3rd and 9th Streets at Constitution Avenue, NW