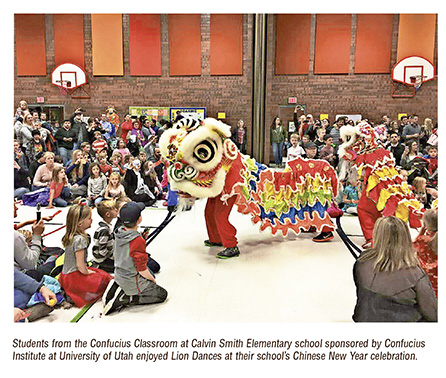 This article is paid sponsored content that appeared as an advertorial in the July 2018 issue of The Washington Diplomat.

At a time when U.S.-China relations are as important — and as precarious — as ever,
Confucius Institutes are promoting mutual understanding by both nations.

Launched 14 years ago to promote the study of Chinese language and culture around the world, Confucius Institute programs support instructional language training and certification, and encourage increased research in China studies. Named for the famed Chinese philosopher and educator who lived from 551 to 479 B.C., more than 500 Confucius Institutes currently operate around the globe, with more than 100 branches teaching students Mandarin on American college campuses and public schools. Confucius Institutes are partnerships jointly funded by local educational institutions, Chinese universities, and the Confucius Institute Headquarters in Beijing.

The growth of Confucius Institutes in the U.S. reflects administration policy priorities of the past decade. In 2006, President Bush launched the National Security Language Initiative (NSLI) designed to strengthen national security and prosperity in the 21st century through education, especially in developing foreign language skills. In 2009, President Obama’s 100,000 Strong Initiative had a goal of encouraging 100,000 American students to study in China and learn Mandarin over a five-year period. Six years later, in 2015, his One Million Strong initiative aimed to have 1 million American students learning Mandarin. Confucius Institutes support these initiatives by connecting American educators to needed programs and resources.

Backers of the U.S. institutes point out that Confucius Institutes have helped fill a gap in Chinese language study and student exchanges between China and the U.S. at a time when many American campuses are shrinking their humanities programs. In addition to their presence on more than 100 American college campuses, many Confucius Institutes are involved in teaching or teacher training for local K-12 schools.

And the partnerships don’t work just one way. More than 1,300 Chinese students are currently enrolled at the University of Nebraska-Lincoln, according to Ronnie Green, the university’s chancellor. “We see this as a dual exchange,” he noted at a recent forum hosted by the Confucius Institute U.S. Center and World Affairs Council-Washington, DC that featured former U.S. Senator and Defense Secretary Chuck Hagel. “We see this as us placing our students in China, as well as providing an opportunity for our Chinese counterparts to be here in the U.S. We believe in the mission, we’re living that mission and we’re seeing success in this mission.” Hagel said that the world’s most successful people are often widely versed in other cultures and experiences, and the Confucius Institute’s programs provide those opportunities for young Americans.

“The most important capacity in any successful person is to listen and learn — those are the dynamics of anyone who is successful in life and it’s a constant learning process,” Hagel added. “The more students can equip themselves with knowledge of other countries, other cultures and widen their horizons … the better. And I’m not sure we always do that very well.” The forum was filmed for an episode of the newly launched U.S. China Global Education Television Series.

Some critics contend that the Confucius Institute aims to soften Western perceptions of communist China, squelch campus debate about Chinese policies and downplay allegations of human rights abuses in the country. But William Reeder, a former dean of the College of Visual and Performing Arts at George Mason University in Northern Virginia who helped the school open a Confucius Institute on campus a decade ago, said that has not been his experience. Reeder, who is still a member of the George Mason faculty, said it’s not that George Mason’s administrators, professors and students don’t recognize differences between the U.S and China on trade, human rights and other issues. It’s just that they don’t dwell on them.

“Geopolitical dynamics are real, human rights are real, but so is the people-to-people exchange,” Reeder said. “We don’t deny these other dynamics, but they are not what this mission is about. And we have had zero interference or even suggestion of interference in academic programs or what we teach or whatever from the Confucius Institute operating on campus.” 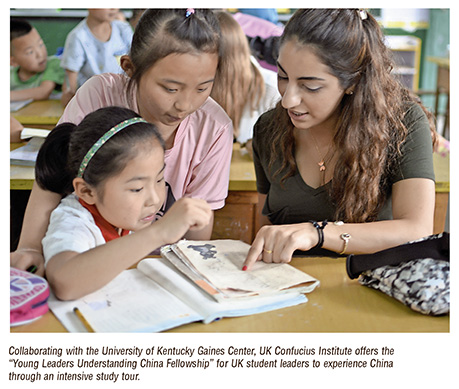 Reeder said the broad interest nationally in Confucius Institutes shows how appealing the partnerships are for American colleges and universities.

“Many universities have a strong interest in China, Chinese students and partnerships,” Reeder said. “We viewed this as giving us a chance to partner with the Beijing Language and Culture University [the Chinese partner university to George Mason where Mason students can study abroad to learn Mandarin], and that partnership has been very, very successful. The program was meaningful and substantive.”

official who worked on international postal affairs, said he’s studied Mandarin off and on for years but said he didn’t become aware of the Confucius Institute until his daughter, who was studying at Haverford College outside Philadelphia, earned a year-long scholarship to study the language at Beijing Language and Culture University several years ago. After that, she remained in Beijing for three years, working for a company that helps Chinese high school students apply to top U.S. colleges and universities.

Delehanty, who has since helped launch a Chinese literature group at George Mason University, said the cultural exchange offered by the Confucius Institute is second to none. “It’s a way to project culture and people-to-people communications and engagement around the world.” He also said it provides an authentic learning space for the growing number of young Americans interested in learning the Chinese language.

Chinese courses are now offered at more than 4,000 primary and secondary schools in the country. “There are more and more young people studying Chinese, and the value for me is to have the opportunity or a place or venue to do deeper study of Chinese culture, particularly through the literature,” Delehanty said.

Confucius Institutes help meet the growing demand for high-quality Chinese language and culture courses, especially for individuals in communities that may not otherwise have access to these opportunities. Middle school student Kamila Carter, a child of deaf parents with a passion for learning languages, has been studying Chinese with support from Confucius Institute of San Diego State University. “The Confucius Institute invited me to their Six Arts performances,” she said. “One of the performances this year was at SeaWorld for the Chinese New Year Celebration. This was my first experience as an emcee in which I used English, Chinese and American Sign Language. At first this was really scary but the more I did it, it became easier. This summer the Confucius Institute is making it possible for me to travel to China to experience the Chinese language and culture. I will stay with a host family in Linyi and I will have an opportunity to visit Beijing and the Great Wall.” 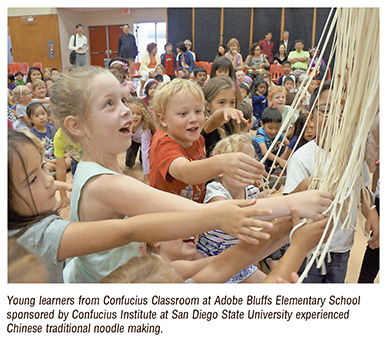 Another example is in Utah. Since the establishment of the first Confucius Institute there in 2007, more than 13,000 students have participated in Chinese language classes. Supported by the Confucius Institute, Utah’s dual-language initiative has become a leading program in American immersion language instruction, preparing Utahans to thrive in today’s global society. In a meeting with Utah students and educators earlier this year, Sen. Orrin Hatch (R-Utah) called the Confucius Institutes’ programming “really critical and crucial” and said that learning Mandarin is in Americans’ best interest.

Bramble noted the deep link between the American and Chinese economies and said the way to reach consensus on tricky issues such as trade is through communication and enhanced cultural understanding. He said Utah leaders are intent on avoiding the “drama and conflicts” that exist at the federal levels between the U.S. and China.

Official treaties are done at the national level, but economic development and providing a pathway for trade is the domain of the states,” Bramble said. “And it’s very appropriate for state legislatures to engage in this way. We may have a different form of government, we may disagree on various philosophic principles of government, but whether we agree with China or not we better understand them and we better be able to build a relationship and have a way to peacefully coexist,” Bramble said.

As Reeder of George Mason University sees it, the Confucius Institute’s work in the realm of cultural understanding is indispensable, especially as he looks at the long term in geopolitics. “My belief is that over the next 50 to 100 years, the two most important countries on the planet will be China and the United States,” Reeder said. “There is no reason not to work together meaningfully.”

This article is paid sponsored content that appeared in the July 2018 issue of The Washington Diplomat.