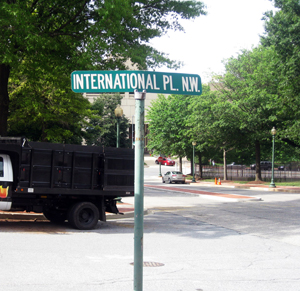 Come fall, Chinese diplomats in Washington, D.C., may well go to work at 1 Liu Xiaobo Plaza: On July 14, the D.C. Council unanimously passed a resolution to rename a portion of International Place, NW, on which the Embassy of China sits, after a jailed Chinese dissident.

International Place, the street in front of the Chinese Embassy, could be renamed in honor of a jailed Chinese dissident, a diplomatic snub aimed at Beijing’s human rights record.

The approval came on the heels of a similar vote by the House Appropriations Committee to honor Liu outside the embassy of the very government that imprisons him. Not surprisingly, Beijing is not amused with the diplomatic tweak, calling it “meaningless sensationalism.”

Since 2009, Liu Xiaobo has been serving an 11-year sentence for subversion of state power for his role in Charter 08, a manifesto demanding human rights, free speech and an end to one-party rule in China. A writer, professor and activist, Liu won a Nobel Peace Prize in 2010 (news that China attempted to censor). While he serves his prison sentence in Liaoning province, his wife, Liu Xia, is under house arrest, though she has been convicted of no crime. In 2011, the U.N. Working Group on Arbitrary Detention determined that the imprisonment of Liu Xiaobo and house arrest of Liu Xia violate the Universal Declaration of Human Rights.

Those in favor of renaming International Place, which is a federally owned street, are hopeful the public snub might pressure China into freeing Liu and his wife and improving its human rights record. Spearheaded by Rep. Frank Wolf (R-Va.) and Dissident Squared, a project of the group Advancing Human Rights, the idea gained bipartisan traction in Congress and passed the House Appropriations Committee in June, just in time for the 25th anniversary of China’s crackdown on pro-democracy protesters in Tiananmen Square.

“By renaming the street in front of the Chinese Embassy after Dr. Liu, we would send a clear and powerful message that the United States remains vigilant and resolute in its commitment to safeguard human rights around the globe,” a bipartisan congressional group, including Wolf, wrote in a letter to the D.C. Council in May. “This modest effort would undoubtedly give hope to the Chinese people who continue to yearn for basic human rights and representative democracy and would remind their oppressors that they are in fact on the wrong side of history.”

The effort is not without precedent: In 1984, the Senate passed a measure that changed the address of the Soviet Union’s embassy in D.C. to No. 1 Andrei Sakharov Plaza, in a nod to the Soviet dissident. Within two years, Sakharov and his wife were able to live freely in Moscow. In addition, New York City took a stand against apartheid by renaming a street corner by the South African consulate after Nelson and Winnie Mandela.

“This approach definitely works,” Skip Winitsky, director of programs at Advancing Human Rights, told The Washington Diplomat. Renaming the street Liu Xiaobo Plaza, Winitsky and his colleagues believe, would not be a mere gesture, but rather a call for action.

“In the grand scheme of things, it’s hard to get people to pay attention to these individual victims of human rights abuses, but very often one individual story does get people’s attention,” Winitsky said. “Our organization exists to call attention to all human rights abuses in closed societies. If we can get people to focus on one particular story, people will get interested in the larger story, and people in the free world will start pressuring their governments to do something more about human rights.”

“Publicly, we’re not taking a position on it at this time,” said State Department Deputy Spokeswoman Marie Harf at a June 26 press briefing. 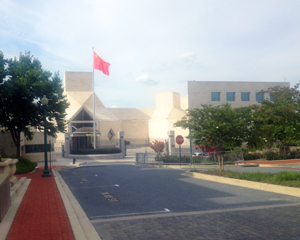 Representatives of the Chinese Embassy, above, have denounced the decision, calling it “meaningless sensationalism.”

Similarly, the Obama administration has been cool to the proposal. Although largely symbolic, renaming the street would be a pretty blatant slap in the face to America’s third-largest trading partner.

Meanwhile, the Chinese Embassy has publicly denounced the potential renaming as a “smear” and a “farce.”

“Some people from the United States have used so-called human rights and the Liu Xiaobo case to engage in this meaningless sensationalism,” said Foreign Ministry Spokeswoman Hua Chunying in a daily news briefing.

A few people agree: Foreign Policy’s Isaac Stone Fish called the entire thing “a distraction” that’s seen as “Western meddling” by the Chinese. In a July 7 article, he points out that the U.S.-China relationship “encompasses much more than just human rights” and that renaming the street sets in awkward precedent for countries such as Saudi Arabia that have equally dubious human rights records. Above all, he argues that shaming China won’t work — Washington should focus instead on concrete measures such as greater human rights funding. “Beijing’s behavior toward Liu is absurd. But U.S. policy has never been to fight absurdity with absurdity,” Fish wrote.

Advancing Human Rights and other groups, however, say the only thing that’s absurd is China’s misplaced outrage whenever Washington criticizes its treatment of political dissidents.

“When the resolution was first passed, the Chinese government said, ‘We find this disrespectful,’” Winitsky said. “Well, we find it disrespectful to ignore the U.N. Universal Declaration of Human Rights.”

Another spokesperson for the Chinese Embassy, quoted by the Washington Post, asked how the United States would react if the situation was reversed. “We believe that the U.S. people will not like to see a U.S. street be named after a criminal.”

Winitsky, though, doesn’t give any weight to possible Chinese retaliation.

“They’re certainly free to do that,” he said. “I don’t think they will, because … any reasonable observer is going to say that the United States is certainly way ahead of the People’s Republic of China as far as preserving, protecting, defending human rights.”