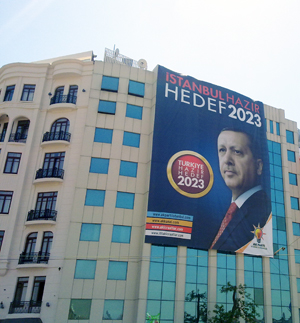 On Aug. 10, Turkey will elect its president by popular vote for the first time in history amid a period of acute political polarization.

But the election itself might not be the only first. Many analysts say that if frontrunner and current Prime Minister Recep Tayyip Erdogan wins the race, the country will see its first assertive executive presidency since the largely ceremonial position was created under the 1982 Turkish constitution.

Erdogan, who has served his three-term limit as prime minister, said in April that if he were elected then the country would be a “de facto” presidential system, granting the position extensive powers by virtue of the fact that he was directly elected.

An election campaign poster featuring Turkish Prime Minister Recep Tayyip with the slogan “Istanbul is Ready, Target 2023” hangs in Taksim Square. By running for the presidency, Erdogan is hoping to extend his term.

That would extend Erdogan’s 11-year rule, which has been marked by both success and controversy. The former Istanbul mayor has been praised for transforming Turkey into a regional power player, presiding over unprecedented economic growth, loosening the military’s grip on governance, reaching out to the alienated Kurdish minority, giving greater religious freedom for the Muslim majority, and serving as a model of Islamic democracy. He has also been criticized for stifling dissent, funding an ego-driven building boom, raging against perceived enemies, and trampling Turkey’s cherished secularism by pushing an overt Islamic agenda that tries to micromanage people’s lives.

Despite the backlash, Erdogan retains a solid base of support and has suggested he’d like to remain at the helm until 2023, the 100th anniversary of the founding of modern Turkey by Mustafa Kemal Atatürk. That would cement Erdogan’s reputation as the leader who brought the country into the 21st century, perhaps even eclipsing Atatürk’s legacy. It would also inevitably inspire comparisons to Russia’s Vladimir Putin, who also gamed the system to stay in power long past his term.

In practice, Turkish presidents under the 1982 constitution have generally held little power beyond the rarely used right to veto legislation and sign treaties with foreign governments.

Erdogan and his ruling Justice and Development Party (AKP) have dismissed the Evren comparison, particularly as the 96-year-old former general was convicted in 2012 to life imprisonment for his role in the coup.

But Emre Deliveli, an economics columnist for Hurriyet Daily News, said that Erdogan’s presidential run is representative of a wider defeat, even if he wins, as he’s widely expected to. 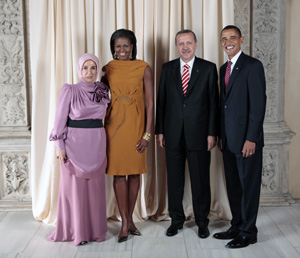 President Barack Obama and First Lady Michelle Obama pose for a photo with Erdogan and his wife in 2009. Today, Erdogan himself seeks to be the first president of Turkey.

That’s because one of Erdogan’s long-stated goals since coming to power as prime minister in 2003 has been to adopt a new constitution for Turkey that would consolidate power in the presidency. However, although the AKP has consistently made gains in both municipal and parliamentary elections, the party has failed to push through constitutional changes during its decade in power.

Now wrestling with possible implication in a corruption probe and angry opposition from the country’s secularists that led to major protests last year, Erdogan is “escaping” to the presidency rather than facing the prospect of an extended and potentially vulnerable period out of power, Deliveli said.

That corruption investigation launched late last year triggered a wave of high-level arrests and resignations among cabinet members and businessmen close to the government. It is believed to have been a broadside in the growing split between Erdogan and his former allies in the Gülen movement (Hizmet in Turkish), which preaches a moderate brand of Islam based on civic service, altruism, education, women’s rights and religious tolerance. The group has no formal structure but is followed by millions, including many from Turkey’s pious capitalist class. Its critics accuse it of being a shadowy cult whose members have infiltrated the ranks of the Turkish media, judiciary and police. 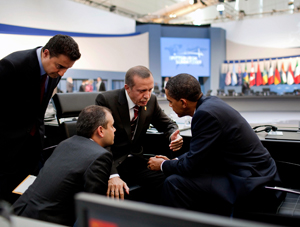 President Barack Obama meets with Turkish Prime Minister Recep Tayyip Erdogan following the G-20 Summit in 2009. Although Erdogan has good relations with the West, which for a time saw him as a model of Islamic democracy, he has recently come under fire for his growing authoritarianism.

Fethullah Gülen is an Islamic preacher who has been secluded in Pennsylvania since 1999 and is head of a network of businesses in Turkey that included — until recently — nearly every private school in the country. Over the years, he has also cultivated a large following in Turkey as a theologian, and although he initially supported the AKP, the two sides had a falling out in 2012 that has led to an internal war of attrition among Turkish conservatives.

A series of tape recordings believed to have been gathered by Gülenist officials have been leaked over the past year purporting to show Erdogan and his inner circle discussing corrupt deals and options for invading Syria.

In response, Erdogan’s administration has shuttered Gülenist schools, reassigned thousands of police officers and judges thought to be under the movement’s sway, and requested Gülen’s extradition to Turkey. In recent years, Erdogan has also railed against what he sees as foreign meddling and internal forces working to sabotage his government — a reference to Turkey’s “deep state,” an alleged clandestine network of influential military and civilian officers who try to pull the levers of power behind the scenes.

Despite the Erdogan-Gülen rift, the graft allegations it produced, and the supposed machinations of the deep state, the AKP trounced the scattered opposition in the March municipal elections. Yet the backlash against Erdogan and his party continues to hang over Turkish politics, signaling the growing divide between the religious and working-class masses that support his government and the liberal, secular elite that doesn’t.

Meanwhile, Erdogan’s victory in the presidential election may prove to be a more difficult test than the local races.

According to a recent poll, Erdogan is a 15-point favorite over his nearest challenger, Ekmeleddin Ihsanoglu, with 54 percent of respondents saying they intend to vote for him, putting him over the 50 percent threshold to forgo a second round.

However, the same poll reported that 68 percent of Ihsanoglu’s coalition was unhappy with his candidacy. Deliveli said that many in the People’s Republican Party (CHP), the largest party supporting Ihsanoglu, are hardcore secularists who disapprove of his open expressions of faith. But Deliveli believes that when push comes to shove, many of those voters who told pollsters they would stay home will nonetheless show up on election day to vote against Erdogan.

The prime minister, however, still has considerable tools at his disposal, one of them being the media.

In May, Reporters Without Borders ranked Turkey 154th in press freedom, dropping it below Russia and Myanmar from “partly free” to the “not free” category. For the past two years, the Committee to Protect Journalists (CPJ) has deemed Turkey the world’s top jailer of journalists. 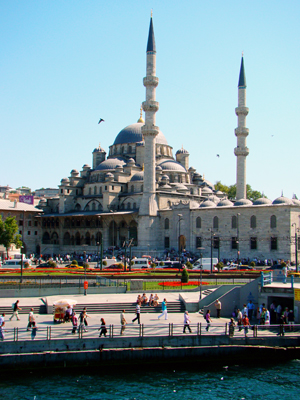 Former Istanbul mayor Recep Tayyip Erdogan has been criticized for stifling dissent, but has been praised for presiding over unprecedented economic growth.

In addition, the CPJ reported that at least 59 journalists had been fired or forced to resign over their coverage of the Gezi Park anti-government protests that swept the country last summer (also see “Before Turkey Clamped Down on Protesters, Media Felt the Heat” in the July 2013 issue of The Washington Diplomat).

What began as a small environmental demonstration against development in Istanbul’s Gezi Park last May exploded for several weeks into a wave of nationwide protests against Erdogan’s heavy-handed rule.

Since then, self-censorship and in some cases direct pressure have led to media coverage that is widely favorable toward the ruling party.

M.K. Perker, an illustrator and editor at the Turkish humor magazine Penguen, said that he expects the media to be even less critical toward Erdogan during this election cycle than during the country’s municipal elections in March.

“Leading up to the municipal elections, there was an expectation that the AKP would perform poorly and at least lose a few major cities, so the media were much more openly criticizing the government than they would have dared before,” he said. “But after the AKP victory, they have all gone silent again and don’t want to gamble on this election.”

Penguen is one of the most conspicuous outlets of dissent in the Turkish press, with weekly comic magazine covers caricaturing and lampooning Erdogan. As a riff on the ongoing corruption probe a week before the municipal polls, Penguen’s cover showed a man stuffing money rather than a ballot into the ballot box. Over his head was a thought bubble saying, “This is all I could scrape together.”

As if those disadvantages weren’t enough, 70-year-old Ihsanoglu announced early in his campaign that he would not be holding large campaign rallies, preferring a gentlemanly competition of ideas. To further make his point, Ihsanoglu donated 1,000 Turkish lira ($470) to the campaigns of his two opponents. The AKP promptly returned the sum.

If the elections do go to a second round, Turkey’s Kurdish population could be the swing vote.

Selahattin Demirtas, the candidate for the pro-Kurdish Peoples’ Democratic Party (HDP), is currently polling in the single digits, but his supporters and other undecided Kurds have the potential to be “kingmakers,” Deliveli said.

Kurds represent about 18 percent of Turkey’s population and both leading candidates have courted their vote by vowing a peaceful end to the 30-year conflict between the Turkish government and the Kurdistan Workers’ Party (PKK), a militant group listed by the United States as a terrorist organization. Since 1984, the Kurdish-Turkish conflict has led to as many 45,000 deaths. 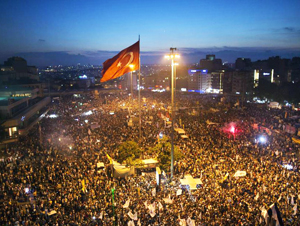 Erdogan, who has been in peace talks with jailed Kurdish leader Abdullah Ocalan since 2012, has long seen the Kurdish vote as key to his goal of constitutional reform. In recent years, he has been trying to find a balance between concessions to Kurds seeking greater autonomy and Turkish nationalists averse to compromise.

One way he has found to court Kurdish voters indirectly has been through Turkey’s increasing support for the Kurdistan Regional Government (KRG) in northern Iraq. In November, Ankara signed a $40 billion energy deal with the KRG against Baghdad’s wishes. Turkish officials have also signaled that they would support an independent Kurdish state in Iraq.

It’s a delicate dance that Erdogan has been playing “smartly,” Deliveli said.

Nicholas Clayton is a contributing writer for The Washington Diplomat based in Istanbul.