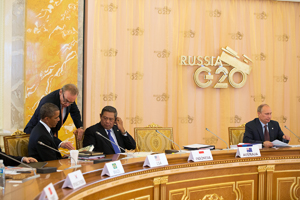 If rhetoric is, as the ancients defined it, speech intended to persuade, then few contemporary politicians seem more devoted practitioners of the art than Vladimir Putin. Rarely does he speak without mounting a rhetorical charge for the Kremlin cause of the day, whether it is ramping up on oil and gas or clamping down on gays and adoption. And whether they cheer or chafe at his message, frequently delivered as a blast of invective directed at the United States, it never leaves audiences indifferent.

Putin’s provocations in Ukraine, however, may finally silence the fiery Russian president, at least for the time being, as the West suspects pro-Russian separatists — supplied with weapons from Moscow — of downing a Malaysian jetliner last month over eastern Ukraine.

President Barack Obama consults with world leaders, left, as Russian President Vladimir Putin waits to begin a session of the G20 Summit in Saint Petersburg last year. With his fiery anti-American rhetoric and dangerous meddling in Ukraine, Putin is increasingly finding himself at odds with Western leaders.

In the face of increasing sanctions, Putin may be forced to stop interfering in Ukraine, but he’s likely to retain a strong well of support back home, not just for his defense of pro-Russian Ukrainians, but also for standing up to what many Russians perceive as Western bullying and the erosion of traditional values.

Often enough, the Russian leader’s pronouncements are shot down in real time by big Western media and officialdom, dismissed with theatrical flourish as the evil diktats of a despot, the duplicitous mind games of a KGB charlatan or the fevered ranting of a man trapped in the past and utterly detached from the civilized discourse of today’s “international community.” His assertion earlier this year, in an op-ed in The New York Times, that it is “extremely dangerous” for Americans to consider themselves “exceptional” in the world was ample evidence of this pattern, triggering shrieks of indignation from Washington’s policy and media elites. Like any effective caricature, the flamboyant outrage from the Beltway establishment at Vladimir Putin’s more provocative rhetoric is grounded in a measure of fact and no doubt reflects genuine disagreement in principle.

Yet the reality that such superficial reaction fails to reckon with is that, objectionable as it is to a brave handful of liberal activists inside Russia and a chorus of policymakers and pundits in Western capitals, Putin’s rhetoric indeed resonates deeply with both an overwhelming majority of Russians and a less vocal but growing audience of conservatives and nationalists in Western Europe and the United States. Voters on both sides of the Atlantic increasingly say they are fed up with cultural relativism, unhappy with centralized authority, whether it be in Brussels or Washington, untouched by the promised benefits of globalization and opposed to large-scale immigration. They are today demanding the wholesale repeal of policies and practices fostered by liberal, democratic government in the West for generations.

These conservative and nationalist voters say the West has strayed too far from “traditional values” in family and society. They argue that “founding principles” once sacred in their countries are being eroded or jettisoned altogether, and they seek a global order where national borders are again solid, with national self-interest the only coin of the realm. They are flocking steadily to, for instance, the tea party and Christian-right groups in the United States, the National Front in France, the UK Independence Party in Britain, the Party for Freedom in the Netherlands, Jobbik in Hungary and similar conservative-nationalist organizations in numerous other Western countries.

While they have not yet attained the critical mass needed to take the reins of government in the West, their numbers are, judging from the results of the latest cycle of elections in Europe and the United States, growing. Conservative, nationalist and right-wing parties and movements have become more than just an aberration on the postwar political landscape. They project real power and constitute a full-fledged challenge to the West’s liberal postwar model. And whether they acknowledge it grudgingly or enthusiastically, much of the anti-liberal gospel that Vladimir Putin preaches both within and beyond Russia is music to their ears. This is a reality that Western journalists and officials, in the apoplectic competition to demonize the Russian leader in the most colorful metaphor, often overlook. And it is an oversight that has consequences for Western societies. 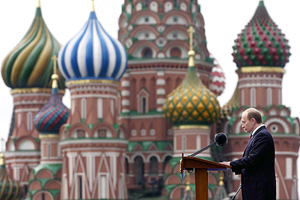 Russia’s Vladimir Putin speaks at a military parade in front of the Kremlin in 2005 to mark the 60th anniversary of Russia’s victory in World War II.

“Peoples all over the world, claims Putin, are supporting Russia’s ‘defense of traditional values’ against a ‘so-called tolerance’ that is ‘genderless and infertile,’” conservative columnist Patrick J. Buchanan wrote in December in a column aimed at American conservatives titled “Is Putin One of Us?”

“While his stance as a defender of traditional values has drawn the mockery of Western media and cultural elites, Putin is not wrong in saying that he can speak for much of mankind.”

Buchanan’s assertion that the Russian leader speaks for much of the world is of course specious. But Putin — whose unrivaled popularity in Russia was built in large measure on exploiting a deep sense of victimization by the West among many Russians and appealing (largely through television news broadcasts, which he controls tightly) to basic “patriotic” instincts among his countrymen — does keep a very close eye on the world and its fast-shifting political and economic currents. He knows where his audiences are — and where they are not — and he tailors his message carefully to achieve maximum impact with them.

That messaging has shrewdly seized on the palpable discontent over culturally divisive issues such as homosexuality, abortion and religion to create what journalist Melik Kaylan calls “a discernible, exportable, full-fledged ‘-ism,’ one that [Putin] has evolved slowly and that the West has been even slower to identify.”

In the recent World Affairs article “Kremlin Values: Putin’s Strategic Conservatism,” Kaylan argues that the Russian president “has moved up from mere reflexive anti-Americanism to deploying a marketable philosophy, an evolution that Western observers have difficulty acknowledging because our news media are committed to the monochromatic view of Putin as an amoral leader.”

Kaylan warns that Putin, whom he calls a “consummate cynical operator,” is trying to upend Cold War-era roles between East and West by making Russia “ground zero for defenders of Christian tradition, of conservatism, the nation-state, family values and the like.”

This is not to say that the increasing strength of conservative-nationalist politics in Europe and the United States is attributable to, or even much inspired by, Vladimir Putin. Political gains by right-wing forces in the West, experts agree, are first and foremost the product of domestic realities in which a wide range of local social and economic circumstances far outweigh any influence the Russian leader wields. 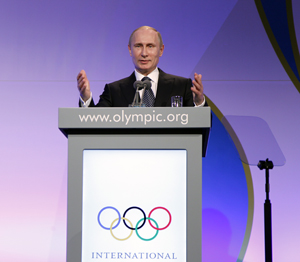 Vladimir V. Putin, President of the Russian Federation, speaks at a dinner hosted for heads of state and other dignitaries on the eve of the opening ceremony of the 2014 Winter Olympic Games in Sochi. In face of recent sanctions, Putin may be forced to stop interfering in Ukraine.

“There are more important factors that account for the rise of those groups than the fact that they may have an admiration for Putin,” Steven Pifer, a former U.S. ambassador to Ukraine and expert on the Soviet Union who is now a director and senior fellow at the Brookings Institution, told The Washington Diplomat.

But that said, the rhetorical affinities between Putin and the leaders of growing nationalist movements in the West do exist, Pifer explained, and it is important for political leaders and media to recognize those affinities and address their origins if the West is to formulate effective “pushback” strategies against the propagandized mystique that surrounds Putin and against the hard-line nationalism that admires his narrative.

“Putin does portray himself as a strong, decisive, forceful leader and I think that plays well with a lot of these groups,” Pifer said. “Putin standing up to the European Union over issues like Ukraine, forming his own Eurasian economic union — I think that has appeal to groups in EU member states that question the authority of the EU.”

When Barack Obama dismisses Putin as a “bored kid in the back of the classroom,” when Angela Merkel says he is living “in another world,” when Hillary Clinton complains that Putin is doing in Ukraine “what Hitler did” in Poland and elsewhere, they no doubt give voice to popular perceptions shared by their constituents, racking up easy political points at home. And mass media, by its very nature, thrives on such earthy, simplistic sound bites because they “humanize” the story, drive ratings and revenue, and help journalists tell complicated stories in simple terms. So the pattern continues: With nearly every public utterance, Putin reinforces the image he seeks to project of himself around the world as a champion of morality in a decadent world, protector of his surrounded people and fearless speaker of truth to (U.S.) power. 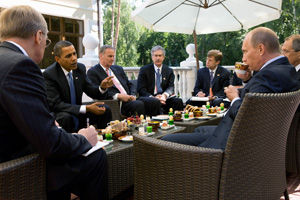 President Barack Obama and members of the American delegation meet with Prime Minister Vladimir Putin at his dacha outside Moscow, Russia, in July 2009. Obama recently joined Europe in expanding sanctions on Russia.

Ironically, by underestimating the resonance that Putin’s rhetoric has among disaffected voters in their own countries and systematically portraying the Russian leader as out of step with their own values, Western officials and media only reinforce the optic that Putin successfully promotes, effectively ceding control of the larger political narrative to the Kremlin. The emotional vitriol directed by Western capitals at Moscow — as opposed to clear-eyed engagement with the very audiences that are attracted to Putin — is precisely the oxygen that the Kremlin depends on to promote Putin’s agenda, both within Russia and abroad.

Despite difficult economic circumstances, bewildering, fast-paced social change and embarrassing missteps of all kinds around the world, the West has dynamic, liberating and inclusive ideas about how humanity might move forward in the 21st century — ideas that have withstood the test of time. But as Putin understands very well, the full force of those ideas will not resonate in a rapidly changing world until the West comes to grips with the shifting moods in its own house. More clear-eyed understanding of why Putin’s rhetoric finds genuine purchase among conservatives and nationalists in the West today — and less headline-grabbing, superficial bombast — is needed from politicians and journalists if the Western democratic way of life is to remain attractive to the world.

Christopher Boian was Moscow bureau chief for Agence France-Presse from 2005 to 2010 and worked as a foreign correspondent for AFP, the International Herald Tribune and others around the world for 30 years. He is now a principal with the turner4d communications firm in Washington, D.C.