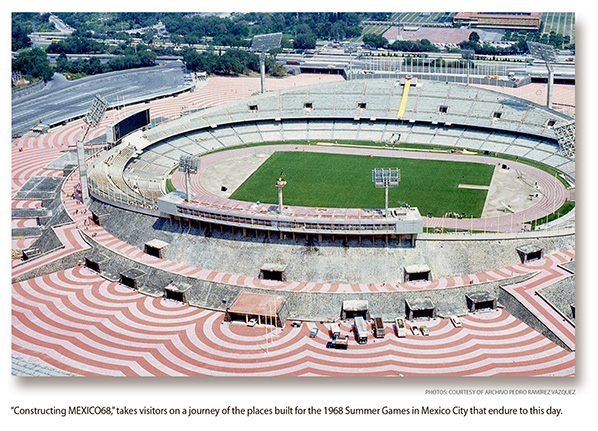 The recent Pyeongchang Winter Olympics made headlines for the historic rapprochement of North and South Korea that may have led to a diplomatic breakthrough on the North Korean nuclear dilemma. The 2008 Summer Games in Beijing represented China’s global coming-out party. The 2014 Winter Olympics in Sochi were marred by allegations of widespread corruption in Vladimir Putin’s Russia.

Like the highs and lows that athletes experience during competition, each Olympics comes with its own highs and lows. Some make history, such as the Gold Medal-winning performance of African American track star Jesse Owens in Germany’s 1936 Games, which shattered the myth of Nazi supremacy. Others, such as the 2004 Olympics in Athens and the 2016 Olympics in Brazil, leave behind a dubious legacy of wasted dollars and unused stadiums. Many Games simply disappear from our collective memory.

Despite the controversies that often surround the Olympics and questions about whether hosting such a costly endeavor is even worth it nowadays, the international competition remains a point of pride for many nations whose name is forever attached to it.

To honor the 50th anniversary of the first Latin American Olympics, the Mexican Cultural Institute is hosting an exhibition, “Constructing MEXICO68,” that takes visitors through a journey of the places built for the 1968 Summer Games in Mexico City that endure to this day. 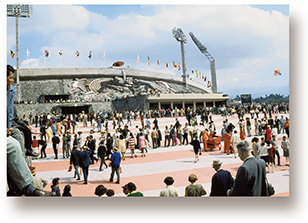 “I feel a great admiration and amazement for Mexico ’68,” said Carolina Borja, cultural director of the Patronato Ruta de la Amistad A.C., which played a pivotal role in the Games. She cited “the work behind the Olympic Games, the cultural and sport programming and the legacy that the event has left behind, which is still alive today, such as the Route of Friendship.”

The Route of Friendship, or Ruta de la Amistad, refers to an urban gallery of 22 monumental sculptures commissioned for the Games that were created by artists from five continents. The sculptures are spread out along a 10-mile route that united distant Olympic venues and grace the esplanades of three stadiums.

Design and function were a large part of the ’68 Games. Not only were existing structures adapted, the city also rapidly constructed new and more modern facilities to accommodate the diverse sporting events. The goal was to create structures that were both practical and ground-breaking.

“Architecture was unique because the venues were built to identify, distinguish and project the architectural, technical and organizational capacity of the country,” said Javier Ramírez Campuzano, director of the Archivo Pedro Ramírez Vázquez Archive and vice president of Patronato Ruta de la Amistad. “The intent of the project was to build, equip and train personnel to operate facilities in only 27 months.”

It was a deeply personal and patriotic effort. Mexico became the first developing nation to ever host an Olympics. According to Campuzano, the objective was to demonstrate Mexico’s ability to fulfill the world’s expectations with dignity and efficiency.

“I personally enjoy the last gallery where American artist Todd William’s work is showcased,” said Campuzano. That gallery displays early pictures of the construction of the Magic Circle and a letter from the Olympic Organization Committee telling Williams that his work would be included in the Route of Friendship. “I enjoy viewing the correspondence. It gives a peek into how art commissions were organized 50 years ago, before e-mail and the internet,” Campuzano said, noting that the various sculptures erected for the 1968 Games speak to the power of cultural exchange in public art. 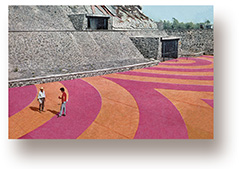 But the 1968 Games did not go off without controversy. Just 10 days before the start of the Games, students protested against the use of funds to build stadiums over social programs and reform. The army fired on the protesters, killing over 200. The clashes, part of the Mexican Student Movement of 1968, left a shadow of repression that would continue to haunt the country for years to come.

Yet the Games also represented a new chapter for Mexico and the region. “1968 was a relevant year worldwide and Mexico ’68 played an important role in history,” Borja said.

There were a number of firsts associated with the Games: It was the first to be staged in a Latin American country and the first in a Spanish-speaking country; it featured the first live TV transmission in color and the first woman to light the Olympic cauldron (Enriqueta Basilio); and it instituted the first anti-doping program and the first international press center.

In addition, it was the first time that the Olympic Organizing Committee was composed solely of Mexicans, and the ’68 Games marked a return to the Greek ideal of a cultural and athletic Olympiad.

The exhibit is filled with “visually exciting imagery that serves as a testimony of going beyond expectations,” Borja said. “Mexico exceeded in all aspects during the 1968 Olympic Games and left a living legacy of design, architecture and art for future generations.”