Home The Washington Diplomat July 2018 Imbibe in Style with an Array of Drink Options in D.C. Hotel Bars 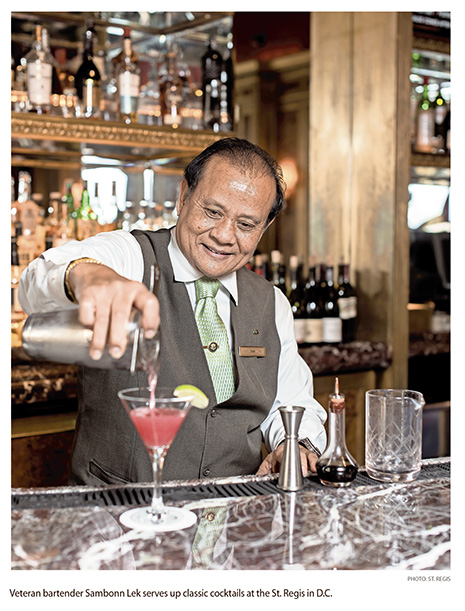 Sambonn Lek isn’t your everyday bartender. Sure, he’s happy to lend an ear to good or bad news as he pours, mixes and shakes, but he’s just as likely to wow with tricks as he is to work his magic preparing drinks.

Lek, a Cambodian native whose father was an ambassador, does mind-reading and levitation, and he can turn a $20 bill into two $10 bills — “but only at slow times. I cannot do it when it’s busy,” he said.

A few times he’s even played matchmaker. For instance, there was the man who asked him how he could approach a fellow bar patron. “I say, ‘Don’t worry, sir. I’ll take care of it,’” Lek told us. “I say, ‘Showtime!’ and then I say, ‘Sir, do you mind sitting next to the lady over there? That way I can show one time. I don’t want to show twice.’” After he was done, the two started talking and eventually married.

But not all his tricks involve sleight of hand. Lek collects business cards and until 2008, he mailed 3,000 holiday cards every year. After the recession hit, he switched to sending e-cards. Additionally, if a woman at the bar is celebrating her birthday, he gifts her a scarf from Cambodia. “They remember this small thing I do for them,” he said.

Lek, 64, came to Washington in 1974. He worked for a few months as a dishwasher at the now-closed Blackie’s House of Beef before taking another dishwashing job at the Golden Ox, which promoted him to bar-back.

“I wrote down whatever the bartender does — let’s say, how to make gin and tonic,” Lek said. So, when the bartender didn’t show up, he easily moved into the position.

The Khmer Rouge took over Cambodia in 1975, and the State Department offered Lek the chance to earn a green card and attend hotel management school. In April 1976, Lek accepted a position as bartender at the Mayflower Hotel’s now-closed Town and Country Lounge.

A few years later, “they asked to promote me to beverage manager. I said, ‘No, I love my bartending,’” Lek recalled. In 1980, he became head bartender instead — and a beloved Washington institution, serving up drinks at the Mayflower until 2012.

That year, Lek went to Cambodia to work with his nonprofit Sam Relief Inc., which he founded in 1999 with money his mother had left him to use to help the country’s poor when she died in 1998. The organization has built 27 schools and 349 wells, delivered 128 tons of rice to hospitals and awarded more than 100 college scholarships.

In April, Lek returned to Washington as a bartender at the St. Regis, Washington D.C., where he serves his signature Sam I Am drink, which he created in 1980. But mostly he considers himself an old-fashioned bartender serving tried-and-true recipes. “I like the old school better. Old-school, they do it the proper way,” Lek said.

But Lek’s old-school magic is not the only game in town. A younger generation of bartenders is shaking things up with an innovative, experimental approach that treats cocktails as a form of high art.

About a mile away from Lek’s elegant watering hole at the St. Regis, Christopher Mendenhall combines technology, culinary tricks and alcohol in a way that’s earned him the title of lead mixologist at Quadrant Bar and Lounge, a craft cocktail bar at the Ritz-Carlton, Washington, D.C. The difference between “bartender” and “mixologist,” he said, is in the creativity.

At the end of May, it began offering bourbon and whiskey aged using sound wave technology. Growing demand for those spirits led him to look for ways to speed up the process of making them. “The thing about bourbon and whiskey is they’re not like vodka and gin. You can’t make it in a couple days. It takes time. It takes years to mature and become what it is,” Mendenhall said.

His research led him to a machine that uses sonic waves to create spirits in hours that taste like they’ve been maturing for years.

“We take existing whiskeys and we hit it with our magic wand,” he said. Still, “There’s no replacement for time. What we’re really able to do with this machine is show you characteristics of time.”

The intersection of creativity, tradition and science is the future of bartending, he said. With the recent resurgence in the popularity of cocktails, mixologists are working hard to keep up with the demand.

“It got to this point where now we’re trying to one-up each other and find a crazy ingredient. We’re finding Arctic ice and unicorn tears in the rainforest,” Mendenhall quipped. “That’s not sustainable, so I personally feel that the science world is the next turning point of the mixology world. With these devices becoming more available to bars and restaurants, if we fold this third aspect in, we can make almost anything.”

He draws inspiration for his cocktail menu from the culinary world. For instance, the bar’s most popular drink is the Smoked Old Fashioned, made with bourbon, house-made smoked syrup, cherry bitters and cedar smoke. It’s served with warm mixed olives soaked in the same wood chips used to make the drink.

“It’s like being a little kid,” Mendenhall said. “I don’t play with Legos any more. I play with fruits and vegetables and spirits and putting those things together, and it’s exciting.”

Whether you’re on Team Traditional or Team Trendy, there’s a cocktail for you in the D.C. area.

Here’s a sampling of old-school favorites and spirited new concoctions:

Grab a drink and a show as Lek works his magic — both literally and figuratively.

Shake
Serve up with up glass
Garnish with lime wedge 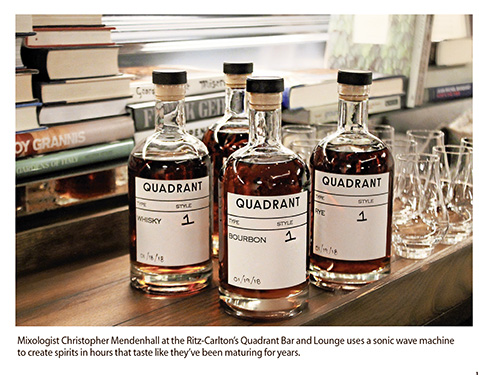 Mendenhall uses a specially made homogenizer that applies vibrations of sound energy to create spirits in hours that taste like they’ve been aged five to 10 years. The addition of wood chips helps mimic the flavor profiles of traditional spirits aged in casks. The alcohol is available in two-ounce pairs ($18-$20).

120-proof, nine-year-old Kentucky bourbon that has been sound-aged

This drink helped put the historic hotel on the map. In 1851, statesman Henry Clay introduced the cocktail for the first time outside Kentucky at the Willard’s iconic Round Robin Bar. Since then, it’s become the hotel’s signature drink, with 20,000 served each year.

Feud of the Founding Fathers at The Jefferson
1200 16th St., NW
jeffersondc.com

Two drinks ($19) called the Jefferson and the Hamilton battle for popularity, much as their namesakes, Thomas Jefferson and Alexander Hamilton, disagreed on the approach to governing under George Washington’s presidency. Quill bartender Sophie Szych drew inspiration for the Jefferson from the gardens of the former statesman’s Monticello estate. The Hamilton ties Caribbean ingredients such as coffee and coconut with American tastes.

Rolled and served in a red wine glass

Shaken and served in a martini glass

In honor of the local run of the wildly popular “Hamilton: An American Musical” at the Kennedy Center Arts through Sept. 16, the iconic Watergate is offering four themed cocktails for $16 each and an optional add-in called My Shot. 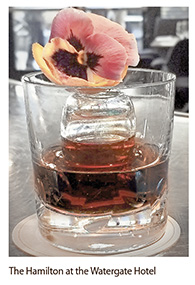 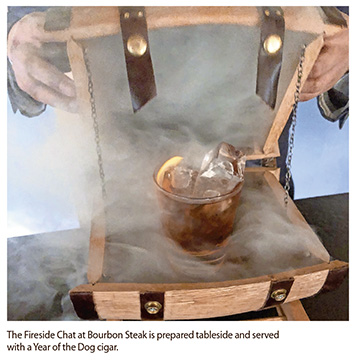 Kahuna Kevin, Fireside Chat and A Ting with a Sting at Bourbon Steak at the Four Seasons
2800 Pennsylvania Ave., NW
fourseasons.com/washington/dining/restaurants/bourbon_steak

Grab a taste of the Pacific, pair your drink with a cigar or give a nod to “Hamilton” with three drinks on the menu at Bourbon Steak’s brick-walled patio.

Lit on fire, tableside, and served in custom mugs by tiki artists 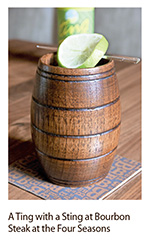 Prepared tableside and served with a Year of the Dog cigar

The Dragonfly at the Mandarin Oriental
1330 Maryland Ave., SW
mandarinoriental.com/washington/

Created by bartenders at this 400-room hotel, the Dragonfly cocktail was so popular as part of the Chinese New Year menu this year that it returned to become a part of the summer cocktail menu. 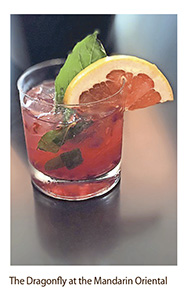 Garnish with pomegranate and basil

Since they appeared on the spring menu at the bar in this Georgetown hotel, three drinks have been especially popular. Between April 1 and May 30, the bar sold 229 Agua Frescas, along with 381 Rhubarb Mules and 307 Spicy Guavas. Each costs $16.

Couple of dashes of orange bitters 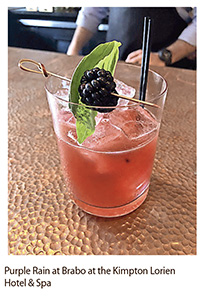 Calling on Prince fans, bartender Niko Chauvet created this riff on a margarita ($16) in honor of his grandmother, who was a fan of the late musician.

What Did You Do? At Firefly at Kimpton Hotel Madera 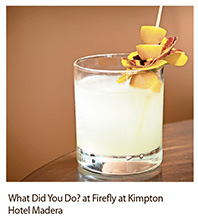 This $16 cocktail is made with ingredients from the restaurant’s rooftop garden.

What Did You Do?