Home The Washington Diplomat February 2013 Consular Corps: Behind the Scenes, But on Front Line of Diplomacy 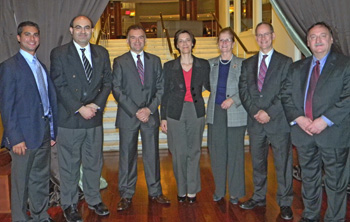 Ambassadors and their diplomatic teams work hard to represent their countries, but there is another parallel track at each embassy that often works just as hard, sometimes 24/7, in a less obvious way: the consular corps.

According to former U.S. Assistant Chief of Protocol Lawrence Dunham, the members of the consular corps are “on the front lines of diplomacy.”

“Many people don’t appreciate all the work they do,” said Dunham. “Consular work is the backbone of diplomacy. Besides passports, visas, providing services and promotional work, they are in charge of emergencies if a citizen is arrested or a foreign national has trouble on vacation. They are the ones that get the call at 3 a.m.”

While ambassadors and diplomatic staff are devoted to bettering all categories of the bilateral relationship with the host country, the consular corps is in charge of looking after their own foreign nationals in the host country — helping with medical or legal issues like overseas voting, divorces, births and even deaths — as well as processing visas for travelers wishing to visit their home countries.

In addition to dealing with personal emergencies like lost passports, consular officials also assist with large-scale crises, such as mass evacuations in the wake of political upheaval or natural disasters.

For example, both Hurricanes Katrina and Isaac, along with 9/11, were exhausting times for all the consular officers in the United States attempting to find their own nationals and alert their families — breathlessly awaiting word — on their whereabouts and safety.

In Washington, D.C., a complicated city even for a seasoned foreigner, a professional membership group called the Consular Corps helps these officials network and navigate life inside the Beltway. The organization was founded in 1968 by former Chilean Consul General Hernan Navarro, who passed away a year ago this month.

The Consular Corps is open to consuls, consul generals and consular officers posted to the United States (i.e. those accredited by the State Department), as well as officials in the federal and D.C. governments who work with the diplomatic corps. Membership fees are $60 per person a year, and the group currently has 73 individual members (Canada and Australia have the most representation). Corporate members who work directly with the diplomatic community in Washington also make up about 18 percent of the membership (their annual fee is $600).

“I’m very enthusiastic and have been a member for six years. This group is extremely valuable, a great avenue because the membership is an important target market for us. It’s a great way to meet prospective clients from the diplomatic community and foreign governments,” he told The Diplomat. “I go to everything from happy hours to monthly luncheons. Other corporate members are targeting the same market so it’s a great way to meet prospective clients, especially since the embassy people rotate in and out every few years and you can maintain and build upon the other business friends.”

Another long-time corporate member, Charles Sharkey, remembers U.N. Secretary-General Ban serving as Consular Corps president for several years. At the time, Sharkey represented America Bank Note, which produced passports, visas, foreign currency and birth certificates — and, as he put it, “anything that someone would want to counterfeit.”

Long-time member Dunham said the organization has evolved over the years. “I have seen the changes. This used to be mostly just ‘a luncheon group,'” he said, “but lately they have had very important programs.”

Today, in addition to monthly luncheons with presentations by top-level officials and monthly happy hours, the group hosts several half-day programs and an annual ball — like the one coming up this month at the Austrian Embassy on Feb. 9. Since it is the weekend before Lent, the Consular Corps has chosen to host an Austrian Faschingsball, or Carnival. In the past, the annual balls have been held at the Australian, Russian and Indonesian Embassies.

The annual ball, luncheons and happy hours represent the light-hearted side of some serious business for the Consular Corps.

One of the group’s signature achievements was a roundtable that’s led to a permanent initiative at the U.S. Federal Emergency Management Agency (FEMA). According to Andrew R. Slaten, FEMA’s deputy director for international affairs, last February’s Consular Corps roundtable on disasters was such a good idea that FEMA has now repeated similar consular roundtables all across the country. More than 20 separate roundtables have been presented to over 1,000 consular officers from Seattle to Puerto Rico.

“This is a very important initiative,” said Slaten, “because at any given time there are an estimated 30 to 40 million foreign-born individuals within the U.S. when you count travelers, business people, students and dual citizens. Chances are very good because of these numbers that someone will be in some kind of disaster because of so many foreign-born or dual citizens in this country.”

From that original February roundtable that the Consular Corps in Washington organized, FEMA’s Whole Community initiative has brought together consular officials from throughout the United States, the State Department, state and local emergency management offices and voluntary organizations like the Red Cross.

“We applaud the Consular Corps’s interest in helping us get out the word,” Slaten said. “Everyone has a stake in disaster preparedness.”

The Consular Corps also sponsors a wide variety of professional and social events during the “Diplomatic Year” from September through June, with a membership drive in September. The half-day seminars and training sessions focus on critical topics led by high-level trainers from the federal or local governments.

Ingrid Richardson-McKinnon, a retired consular officer and long-time member of the Consular Corps, was the group’s treasurer in 2007 when the organization achieved 501(c)(3) nonprofit status. She had been at the Austrian Embassy for 20 years as consul for social and legal matters.

“Our members learn how things work in this very big country,” she told us, “and the American agencies like it since it’s easier for them to work with us when we have more information … and a point of contact when needed.

“For example, for one celebrated case, I needed to have someone extradited. I arranged the help of the U.S. Marshals to escort the person in question to avoid media and extra publicity. I’ve also had help in cases of missing children. In those situations, it was smoother because I knew what could be done.”

She added: “Our meetings also give us the opportunity to get names and contacts of colleagues who would know how to do something if you hadn’t already learned.”

Anne-France Jamart, counselor and consul at the Belgium Embassy, has been a member for the past year and serves as the group’s secretary.

“My former posting was New Delhi so this group is extremely important,” she said of relocating to the United States and being in such a different environment. “Especially when I first arrived …Washington is such a big place and we live so far apart. I got to know my colleagues from the EU countries but in the Consular Corps we can meet others from different parts of the world.”

The current president of the Consular Corps, Anna Lambert, consul at the Swedish Embassy, is proud of the organization’s membership roster but does wonder why there aren’t more members when consuls from the 180-plus embassies in Washington would qualify and membership is so rewarding.

“First, it’s the networking itself. The food is always fantastic but our educational luncheons are so helpful. For instance, we learned what to do when we have citizens, unfortunately, in trouble. You get to know how to work with all the federal agencies. In our positions, each time you move to a new country, you must discover how things are done in each country,” Lambert said. “I learned right away what it sometimes takes a whole posting to learn.”

The reason she suspects that the Consular Corps doesn’t have more members is that “Washington has so many networking groups,” she says, “and there are only 24 hours a day” to get everything in.

On that note, Katherine “Kit” Moss, who handles programming for the Consular Corps, said, “The consuls’ jobs are extremely demanding and emotionally draining. While they are certainly not the only diplomats to be on call 24/7, they toil selflessly and behind the scenes, often under great duress, during times of crisis, in sometimes desperate and even dangerous situations to help their nationals in need,” she said.

“Their workload is tremendous, and each case or application is by someone who needs them to handle it ‘now.’ I have extraordinary respect and affection for the consular community. They work so hard and give so much of themselves.”