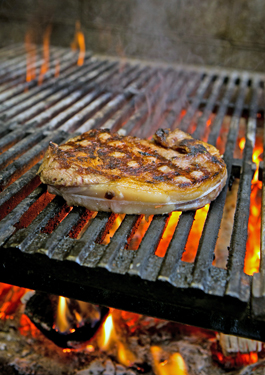 Bryan Voltaggio’s recently opened Range features multiple kitchens, a wood-fired hearth, rotisserie and even a confections counter. The result is a wide-ranging menu that never veers off course, remaining tightly focused on the food and its preparation.

Locally grown celebrity chef Bryan Voltaggio has returned to the Washington area with Range, his new venture in Friendship Heights that gives diners a chance to discover what Frederick, Md., has been enjoying since Voltaggio left Charlie Palmer Steak in 2008 to open Volt, his first solo venture in his hometown.

A year later, he and his brother Michael were the finalists on Bravo TV’s hit show “Top Chef,” catapulting both to culinary fame. Michael took the title of “Top Chef,” but Bryan certainly hasn’t done too badly for himself. The James Beard Award nominee continued to rack up awards and acclaim for Volt, which put Frederick on the dining map (also see “After Four Years of Fame, Volt Still Energizes Historic Frederick” in the August 2012 issue of The Washington Diplomat).

His success with Volt prompted Voltaggio and his business partner Hilda Staples to consider new projects, and hints of things to come began to circulate more than two years ago. The busy pair opened Lunchbox a few blocks from Volt in December 2011, followed a few months later by Family Meal, a moderately priced yet highly inventive family diner spot a mile from Volt. They also turned their sights on the Washington marketplace to develop an even more ambitious concept.

Whereas Volt is upscale and intimate, Lunchbox small and casual, and Family Meal larger and family-focused, Range is just plain enormous. The 14,000-square-foot space includes multiple kitchens; seating for 300 in a combination of bar seats, lounge tables, dining tables and kitchen seating; as well as retail spaces for the kitchen supplies and gadgets used at Range; not to mention a charcuterie station, raw bar, rotisserie, bakery, confections counter, wood-fired hearth and coffee bar. There’s even a swanky new cigar bar next door that’s partnered with Range (see sidebar).

The space is big but the ambience is not overwhelming, with a fresh, clean look. Range’s design is sleek and modern, the colors neutral, and the décor minimal. There is nothing in the concept to detract from the focus on the food and its preparation — except perhaps the floor-to-ceiling glass windows at the front side of the restaurant that are built around the central circular atrium of the newly renovated Chevy Chase Pavilion, offering a potentially distracting view of what’s going on inside the mall.

With the large variety of seating arrangements at Range, diners may have quite a different experience depending on where they sit. So it’s important to decide what you want out of a visit before you go. The kitchen bar seats are exciting but frenetic, while the rooms away from the kitchens feel somewhat isolated but are quieter and more private.

Voltaggio has taken Volt’s open kitchen concept one step further at Range, where dishes are prepared in seven separate open kitchens, each dedicated to a particular technique or ingredient. Diners can also have front-row seats at the raw bar, salumeria, bakery, wood-fired oven, rotisserie or wood-burning grill.

It takes a big staff to support this kind of endeavor, and Voltaggio has assembled a team with impressive pedigrees. To coordinate all the various kitchens, Voltaggio tapped his friend and former colleague Matt Hill to be chef de cuisine. A graduate of the Culinary Institute of America (as is Voltaggio), Hill replaced Voltaggio as executive chef at Charlie Palmer Steak when Voltaggio left to start Volt. 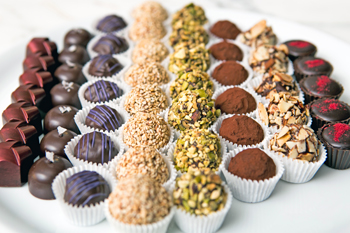 John Miele, another Charlie Palmer protégé, serves as pastry chef for all the Volt family restaurants. At the bakery bar, you can watch Miele and his staff finish the breads that Range serves. Served as small plates (there is no complimentary version), the breads come paired with several different spreads. Individual skillet corn breads, for instance, are accompanied with salty-sweet bacon marmalade; cheddar chive biscuits come with sweet pepper jelly; and the crusty, light ciabatta is served with smoked cream cheese and cranberries. All are well done so the easiest choice is the breadbasket that includes a sampling. Be warned though, it’s filling and you might run out of space for the 80-plus (not including desserts or confections) other choices on the menu.

The bakery also prepares the pizza dough that is transformed by pizzaiolo Edan MacQuaid. Brought on by Voltaggio to man the pizza oven, MacQuaid has done stints at some of the best pizza places in the city, including Pizzeria Paradiso, 2Amys and Graffiato. MacQuaid knows how to handle a pie and is turning out delicious versions on thin, perfectly crispy yet chewy crusts. The choices of topping combinations are enticingly offbeat and include chunks of house-cured bacon, thick slices of charred onion, cannellini bean, arugula, lardo, olives, potato, meatloaf and rosemary. While one might wish for more meatless varieties (there is currently only one), the meats featured on the pizzas are produced in Range’s kitchens.

To handle the meat side of things, Voltaggio selected Julien Shapiro to be both the in-house butcher and charcutier. The choice underscores Voltaggio’s commitment to the whole food concept as well as his emphasis on meat as a central theme at Range. Shapiro learned butchery techniques in Paris, where knives are used to maximize the yield from an animal without wasting anything in the process. At Range, Shapiro brings in whole animals from local farmers and, working to use all parts, includes unusual cuts and offal on the menu.

The beef shin, large enough for six, is slow cooked with carrots and red wine and is tender to the bone — as is the garlicky lamb shoulder roasted on the rotisserie. Beef heart, pork cheeks, lamb shanks and sweetbreads all appear in interesting presentations. Shapiro demonstrates his schooling in the complicated and exacting standards for making sausage and other charcuterie in items such as dense garlic sausage, rich pork riblets, smooth chicken liver pudding, duck galantine and foie gras. With so many choices, the tasting plate offers diners the best way to sample Shapiro’s expertise.

While meat is featured prominently at Range, there are plenty of seafood options. As an advocate of local food sourcing, Voltaggio strives to highlight regional products. Much of the shellfish on the raw bar comes from Eastern Shore producers while some of the fish comes from sustainable sources further afield. Cured Skuna Bay salmon (craft raised in Vancouver) scented with pine and charred lemon is an excellent piece of fish. But the yellow fin tuna — small slices served with soy, lime and tiny jasmine rice cakes — is a work of art, both in taste and presentation.

Range also offers a selection of house-made pastas, some of which are inspired. Diners at the pasta bar get to watch the chef seamlessly put together goat cheese ravioli with a delicious, meaty ragu (lamb flavor dominates). Meanwhile, the tagliatelle served with beef cheek stroganoff and kale is not what you might expect. The thin pasta strips are topped with even thinner slices of meat and dressed in a rich yet light sauce. While the ingredients may resemble stroganoff, the dish is nothing like the hearty Russian classic. 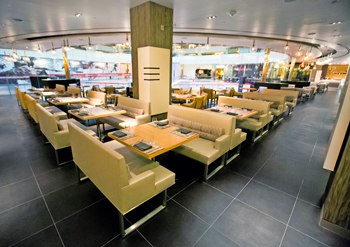 With 14,000 square of feet of space, Range is enormous and can accommodate 300 diners in a combination of bar seats, lounge tables, dining tables and kitchen seating.

Pastry chef Miele’s artistry reappears at the end of the meal with beautiful dessert creations, as well as candy and cookie confections that are available at the table off rolling carts or at a retail counter. Each dessert is an assemblage of the main element and several graceful notes that Miele assembles in strikingly artistic presentations. The best perhaps is a Meyers lemon tart that includes a semifreddo, passion fruit sauce and mango sorbet. Another good choice is the chocolate ganache, which centers on a small tart dressed up with a dollop of white chocolate mousse and sorbet. Range makes all ice creams and sorbets in house. The flavors change but the texture has been consistently smooth and none have been overly sweet. The intense espresso ice cream is particularly striking. If none of the dessert-as-art choices appeal to you or something smaller is in order, the rolling cart offers brownies, biscotti, cookies and candies all made daily in the candy kitchen.

D.C. native Owen Thomson heads up the beverage program. A founding member the DC Craft Bartenders Guild, Thomson makes all the syrups, sodas and garnishes that he puts to good use in the inventive cocktails he’s developed for Range. Perhaps the most talked about drink is the vegan sacrifice, an unusual concoction of scotch, ginger, cayenne and a puck of beef ice. Range also has an extensive wine program that’s designed with low bottle prices relative to by-the-glass prices to encourage ordering by the bottle.

In the month following Range’s opening, the restaurant has continued to evolve. The approach behind this massive showcase of Voltaggio’s talents presents some challenges. With seven different kitchens turning out dishes at their own pace, timing a meal is not easy. Wait staff advise you at the start of the meal that dishes will come out as they are ready. This can make for some odd combinations. The best way to avoid any mismatches is to order in rounds rather than all at once.

Ordering, though, can present another challenge as the size of the plates varies significantly. Some are small and have only two bites, others are large enough to feed a table. Wait staff recommends ordering three to four dishes per person, but depending on what you order, this can leave you hungry or quite full. It can also result in a reasonably priced meal or quite an expensive one. Moreover, the price of the dish is not a good indicator of its size, so the wait staff plays a critical role in helping you choose a satisfying meal.

A restaurant this size of course requires a huge staff, all of whom need to be trained on what is quite an extensive menu. By in large, however, staff members — decked out in Chuck Taylor Converse All Star sneakers, Voltaggio’s favorite — have been pleasant, knowledgeable and helpful.

One of the fundamental appeals of Voltaggio’s latest restaurant is that it reflects his earnestness. Unlike some other celebrity chefs, he does not approach his craft with arrogance or pretension. He is serious about his work and wants you to understand what he’s doing, why he’s doing it, and to share his enthusiasm. He prepares his staff to share this vision and has succeeded in creating easy, comfortable atmospheres with his other three ventures, regardless of price point. Early indications are that Range will carry on this tradition, despite its size and ambitiousness, and will solidify Voltaggio’s welcome return to Washington.