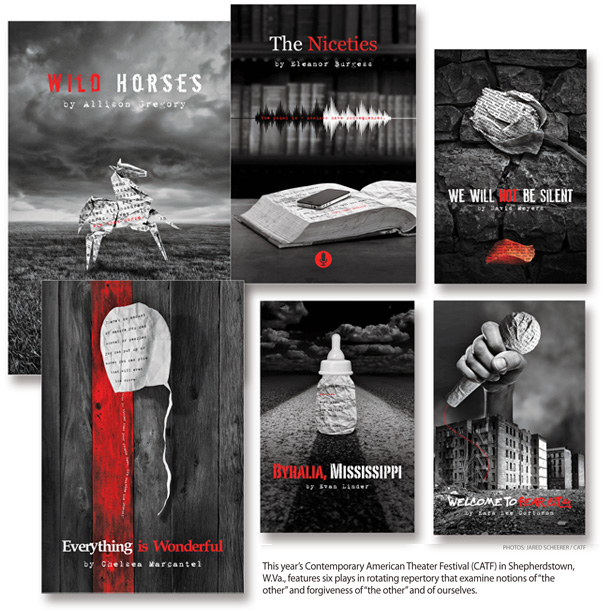 “Make America Think Again” is the compelling goal of the 2017 Contemporary American Theater Festival (CATF) in Shepherdstown, W.Va., according to festival trustee Sharon J. Anderson. At a time when Americans are bitterly divided along partisan and economic lines, this year’s plays “cross the empathy walls,” she said, so that patrons will see the “other’s” perspective.

“Many times, after we select the plays, we begin to see shared ideas,” McKowen said. “This year explores the issue of how people handle being ‘the other’ in a community and how they deal with those outside their population. Through these productions, we comprehend the idea of forgiveness and how willing an individual is to forgive and forget; how certain cultures embrace that idea. Almost all the plays deal with those either directly or they trajectorially touch them.”

This year, the festival, now its 27th season, has expanded from five to six plays in rotating repertory. Four of those plays are world premieres: “Welcome to Fear City” by Kara Lee Corthron; “Wild Horses” by Allison Gregory; “Everything is Wonderful” by Chelsea Marcantel; and “We Will Not Be Silent” by David Meyers; as well as two new plays: “The Niceties” by Eleanor Burgess and “Byhalia, Mississippi” by Evan Linder.

“We Will Not Be Silent” is based on the incredible true story of heroine 20-year-old Sophie, a German student who organized the White Rose, a group of non-Jewish students that led the only major act of civil resistance to the Nazis during World War II, playwright Meyers told The Diplomat.

Sophie, who called for the peaceful overthrow of Hitler, was apprehended for distributing leaflets against the regime, charged with treason and placed in a German prison.

“It’s not a play about the Holocaust. There are no Jews in this play; the resistance group didn’t have Jewish friends,” Meyers explained. “This was an incredible story of someone willing to risk her life [for ‘the other’], knowing it was a hopeless cause but the right thing to do.”

McKowen added: “The character of Sophie must wrestle with what she can live with and what she can’t live with, and whether she can forgive herself for whatever actions she chooses to take.”

For Meyers, who is relatively new at playwriting and came to it after a career in politics, “We Will Not Be Silent” is his first big nationally recognized production.

The theme of forgiveness and “the other” is also very much at the heart of “Everything is Wonderful,” McKowen said.

The play takes place in the Amish community, which unequivocally forgives another Amish person once they admit to his or her mistakes. But how does this insular community deal with forgiving someone outside its hamlet, especially when that someone was a driver who killed a family’s two Amish sons? The play grapples with questions of faith, forgiveness and dark wounds that force everyone to reckon with their past.

Similarly, “Welcome to Fear City” deals with the specific “other” community of 1977 Bronx, which at the time was difficult and dangerous terrain, but also birthed the positive and creative forum of hip hop, McKowen said.

In the play, “E,” a young African American man, dreams of being a poet, but unemployment, a raging fiscal crisis and a family on the brink of disaster drives him to ask a dangerous question: Can you love your “hood” if you take part in its destruction?

The theme of forgiveness plays out when E, while going through his journey, commits arson, which leads his community to embrace him through either pardon or blame.

The fourth world premiere, “Wild Horses,” is a tour-de-force, one-person show of a woman remembering her teenage years and the formative decisions she took that made her the person she is today. The play explores different episodes of her life — some pleasant and some not — and delves into whether she can forgive herself and obtain self-acceptance, McKowen said.

Like other seasons, this year CATF continues to make good on its lofty goals. Founded in 1991 to produce and develop new American theater, to date the festival has produced 115 new plays, including 43 world premieres. CATF has commissioned 10 new American plays, and 40 percent of all plays have been produced by women writers, which is well above the national average, according to the group.

“Theater, like all art, shatters accepted patterns, pushes us into unknown territory and challenges the existing order,” she said. “Bottom line, it challenges us to think. To condemn requires much less mental effort than to think. Empathy bridges cannot be built without understanding, without thinking again.”