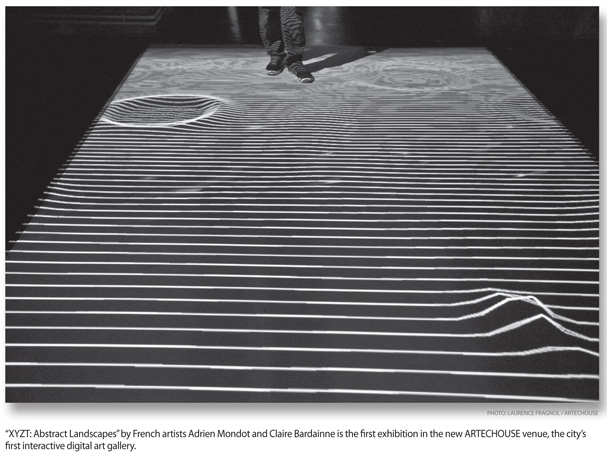 The marriage of art and technology can often seem like a cold, loveless affair, a heavy-handed attempt to translate the ethereal beauty of art through an endless string of ones and zeroes.

But French digital artists Adrien Mondot and Claire Bardainne reveal the possibilities for embracing our common humanity through an artful combination of computer science and creativity in “XYZT: Abstract Landscapes,” a collection of 10 interactive digital installations in the first exhibition at ARTECHOUSE, an ambitious new 15,000-square-foot venue in Southwest D.C. that will feature art, music, theater and film.

ARTECHOUSE, which opened last month, describes itself as D.C.’s first interactive digital art gallery, showcasing experiential and immersive large-scale installations that stand at the crossroads of art, science and technology.

The installations in “XYZT” engage viewers both literally and figuratively with motion-sensing cameras and interactive software altering projected images based on touch, movement or even blowing of breath. After descending a staircase into the basement of a nondescript office building, you turn a corner onto a balcony overlooking the compact gallery. A large screen showing a live video projection of the room immediately engages the viewer. While the background remains static, my movements triggered a carnivalesque distortion as my body swayed in serpentine fashion because of a four-second lag between the top and bottom of the screen. The work is both comical and disorienting but not as engaging as some of the other installations

In “Shifting Clouds,” a roiling sea of digital sticks of light flew together in response to my movement, morphing into human forms as I moved closer to the screen. At a console with headphones, the artists spoke of “collective animal intelligence,” the notion that flocks of birds or schools of fish are individual creatures that can react simultaneously as a whole, moving in concert to defend themselves in a communal act of survival. Predators are confused by the seeming chaos while the hunted are actually moving in precisely coordinated patterns governed by instinct rather than conscious thought.

In “Coincidence #1,” a video projection of dark circles against a wall are suddenly parted by the wave of a hand, creating trails of bright white light. I felt like a conductor directing light rather than music, offering a refreshingly different level of interaction than a static painting or sculpture. On the floor nearby is “Field of Vectors,” a mesh of white digital lines that bent and coalesced around my footsteps. A tabletop installation titled “Kinetic Sand” shifts dots of light based on the movement of fingertips, creating swirling pools of light that rise and fall like mountains into valleys before disappearing again into orderly stillness. “Anamorphosis in Space” offers a larger version of the same effect as visitors walk across the floor in a shifting sea of digital lines that rise and fall with movement. Anamorphosis, derived from the Greek words for back and shape, is a distorted projection that appears normal when viewed from one point, such as the floor at either end of the projection.

The exhibition’s title refers to the combination of the four dimensions: X (horizontal), Y (vertical), Z (depth), and T (time). It’s an apt description for the work that becomes three-dimensional and temporal through its direct interaction with viewers. The exhibition was created in 2010 and has been shown around the world, including dance performances interacting with the projections, but this is its first appearance in Washington, D.C. 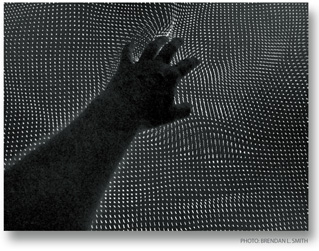 The show is a perfect fit for the focus of ARTECHOUSE, a confusing name that is a combination of art, technology and house. The use of all-capital letters adds to the confusion, and I initially thought it was pronounced art-chouse. The venue is a much-needed private art space in a city dominated by government-funded museums that often won’t take chances on more provocative or avant-garde work. As the city gentrifies at a rapid clip, it has become even more difficult for small art venues to survive. ARTECHOUSE is an ambitious vision from the founders of Art Soiree, the longtime organizer of pop-up art events in the D.C. area. It took more than two years to plan and redesign the space, which originally was built in the 1990s for a theater that never materialized, said Sandro, the founder of Art Soiree and ARTECHOUSE artistic director who uses one name.

“We always wanted to have our own space. We kept it kind of secret, and it’s not a secret any more,” he said. “Every masterpiece needs hard work and dedication and not giving up. Here we are.”

Ticket prices at ARTECHOUSE range from $15 to $25, which may be a challenge in a city where people have become accustomed to seeing art for free in museums. The venue also is off the beaten track in Southwest D.C. between the Smithsonian and L’Enfant Plaza Metro stations.

“Unfortunately, we aren’t some big institution yet,” Sandro said. “I’d say it is worth every dollar spent to have this experience.”