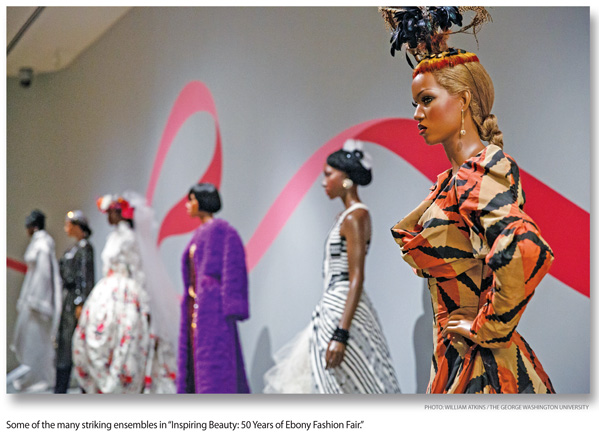 The show, which toured the U.S., Canada and the Caribbean from 1958 to 2009, was a glamourous affair, with music and audience members who aimed to out-dress the models. Although fashion drove the project, philanthropy was the goal, with the fairs raising millions of dollars for charity.

This fascinating history is on display, along with the fair’s stunning ensembles, in “Inspiring Beauty: 50 Years of Ebony Fashion Fair” at The George Washington University Museum and The Textile Museum, where visitors are drawn to an array of vibrant colors, contrasting patterns and elaborate designs. The ephemera reflects the sophistication and extravagance that Eunice Walker Johnson, director of Ebony’s Fashion Fair, brought to the pioneering concept. 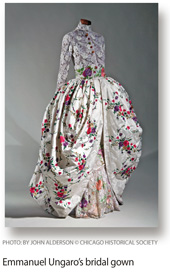 Johnson and her husband, John H. Johnson, owned Johnson Publishing Co. and originally launched the fashion fair as a way to expand the audiences for their lifestyle magazines, Jet and Ebony, while raising money for a hospital. However, the event drastically changed the fashion industry.

The Ebony Fashion Fair brought haute couture to African Americans for the first time and became the first fashion show to introduce black models to the runway, breaking barriers at a time of inequality. The fair was initially met with discrimination and pushback. Designers feared what clients might think if high-end brands were worn by African Americans. By putting “first-class fashion on second-class citizens,” Johnson brought new opportunities to black men and women and changed an insular industry, according to the museum.

This is the exhibit’s seventh stop on its eight-city tour across the country, with the show wrapping up in Raleigh, N.C., after its D.C. run ends this month. The exhibition sprawls across two floors of the GWU/Textile Museum, highlighting 40 ensembles worn in previous fashion fairs ranging from intricate gowns to feathered coats, along with accessories and videos to recreate the fair experience. World-renowned designers such as Givenchy, Christian Dior, Vivienne Westwood and Yves Saint Laurent are showcased, among many others.

Johnson gained access to the highest echelons of the industry and her goal was to shock her audience with bold, cutting-edge fashions. She used vibrant colors, such as canary yellow on a dark-skinned model, and would select the most extraordinary designs. She enjoyed bringing theatrics to the stage, highlighting eye-popping pieces that left audiences uncertain whether or not they could ever be worn off the runway. 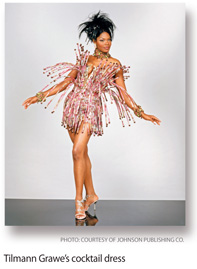 This whimsy is evident throughout the exhibit. Designed by Tilmann Grawe, an exceptional cocktail dress made almost entirely of horsehair tubing, plastic boning and beads wrapped in dazzling fabrics embodies the innovation that Johnson looked for in designers.

The exhibit tells the story of how fashion evolved through the decades. From a ’60s sequined jumpsuit, to a retro ’70s color-block dress, to an elegant modern-day evening gown, the exhibit is a visual parade of creativity and extravagance. Each design exudes power and success, a key characteristic of the fashion fair.

“The exhibit and work illustrate the glamour and sensation of the Ebony Fashion Fair,” Camille Ann Brewer, curator of contemporary art at The GWU Museum and The Textile Museum, said. “[The fair] was an annual event that people really looked forward to. People would dress up for the fair and it was a fun competition with folks on who could wear the sharpest outfits as audience members. You didn’t know what you were going to see.”

To illustrate the bridal line that was always a highlight at the end of each show, the exhibit features an haute couture bridal gown designed by Emanuel Ungaro. The 18th century-inspired wedding gown — comprised of a beaded lace bodice and a lavish pannier-style skirt embellished with embroidered floral sprays — reflects the luxurious craftsmanship that Johnson wanted to share with her audiences.

Johnson would seek out designers from around the world who used a variety of elements in their work. A daytime ensemble by Angelo Marani meshes several contrasting fabrics into one seamless look. The core outfit, composed of neutral-toned lace and leather, is combined with a bold, blue fur coat and exudes a youthful spirit that Johnson wanted her fairs to convey. 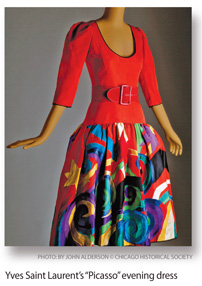 Dedicated to Johnson’s accomplishments, the exhibit includes photographs and memorabilia commemorating her career. In addition to working as Ebony’s fashion editor, Johnson created her own cosmetics line because it was difficult to find makeup for darker skin tones at the time. She showcased emerging black designers alongside established names and continued to find new ways to push the boundaries of the runway, eventually adding plus-size models to her shows.

“What caught me off guard at the show was the response to the plus-size models. The men in the audience would go crazy; they would go berserk. It really validated the appeal of plus-size models,” Brewer said.

Johnson had a huge impact on the world of high fashion at a time when dark skin was rarely celebrated. She opened doors and opened minds, expanding the concept of beauty to include the full color spectrum and illustrating the power of clothing to reshape cultural attitudes.

Brittany Azzouz is a freelance writer in Virginia.