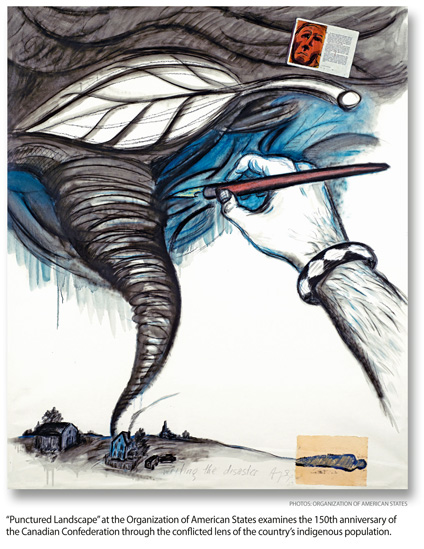 The Organization of American States is often associated with nations in Latin America and the Caribbean. But it encompasses the entire Western Hemisphere, including Canada, which, like its southern neighbors, has a long history of grappling with issues such as identity, democracy, human rights, security and the treatment of its indigenous population.

The OAS Art Museum of the Americas is exploring that history in the exhibit “Punctured Landscape,” which coincides with the 150th anniversary of the Canadian Confederation. The show presents artwork that examines both the trying times and celebratory milestones in Canada’s history, conveying a political and cultural statement.

Canada has been widely lauded for accepting migrants and refugees from Syria and elsewhere, building an inclusive, diverse society. At the same time, it has struggled to reconcile its relationship with its indigenous people and, like many other nations, its multicultural tapestry has been frayed by tensions over questions of identity and inclusion.

Artist Barry Ace, an Anishinaabe native member of the M’Chigeeng First Nation community, wanted to be a part of “Punctured Landscape” because he feels it conveys an important alternative response to outside perspectives of Canada as an uncomplicated, welcoming nation without any problems.

The exhibition is curated by Kegan McFadden, who Ace thought selected a “poignant precis of works, which not only reflect significant cultural, social, political and legal perspectives of Canada, but present them as puncture points in the meta-narrative of Canadian history.”

McFadden was drawn to the exhibit during a call for curators put out by the Canada Council for the Arts. “They [the council] were also looking forward to the 150th anniversary of the Confederation in Canada,” McFadden said. “They are clear to say it is not a celebration — just a milestone or another parking of time. The celebratory nature of the 150th is unresolved for many indigenous peoples of Canada who have been systemically mistreated.”

The 17 pieces brought together for the exhibit ask viewers to take another look at their interpretation of Canadian history, its legacy and its future. 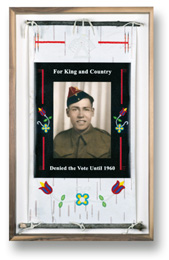 Ace calls the exhibition “unequivocally timely” and believes it can offer an opportunity for self-reflection on the current U.S. political landscape, which is also roiled by tensions over immigration and divisions over race, ethnicity and religion.

Ace said he is proud to tell the story of his father Cecil and “other indigenous veterans who fought for a country that denied indigenous people the right to vote in federal elections until 1960.” His piece is a blunt denunciation of that denial, offering a quaint portrait of his father in uniform with the words: “For King and Country / Denied the Vote Until 1960.”

Other pieces range from swirling paintings of forests and shoes to thought-provoking photography of children delivering newspapers.

According to McFadden, work by indigenous artists makes up over one fourth of the show and represents harrowing events in Canada’s living memory. There’s the Indian residential school system begun in the late 1800s that removed tens of thousands of native children from their communities in an attempt to assimilate them into the dominant Canadian culture, leading to several thousand deaths. There’s also the 1990 Oka crisis, a land dispute between the Mohawk tribe and government that turned violent; a dark history of missing and murdered indigenous women and and girls; as well as a Truth and Reconciliation Commission for Canadians to come to terms with their past. 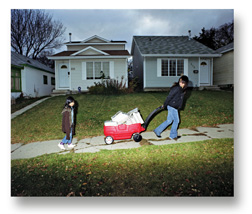 But there are positive stories as well.

“There is a bright light here, with the inclusion of David Neel’s portrait of Chief Elijah Harper,” McFadden noted. Harper became the first Treaty Indian elected as a provincial politician and as a member of parliament in the Manitoba Legislature in 1990, he gained national fame by filibustering the Meech Lake Accord, which would’ve reduced sovereignty for Quebec. The refusal of Harper — who argued that Aboriginal people were left out of the debate over the constitutional amendment — effectively killed the accord.

Ace, who learned his artistic techniques from his grandmother and aunts, said he will continue to highlight indigenous challenges and victories. He has several significant exhibits planned at the Art Gallery of Ontario and Royal Ontario Museum, in addition to creating new works of art that draw inspiration from “multiple facets of my Anishinaabe culture and that endeavor to create a convergence of the historical with the contemporary,” he said.