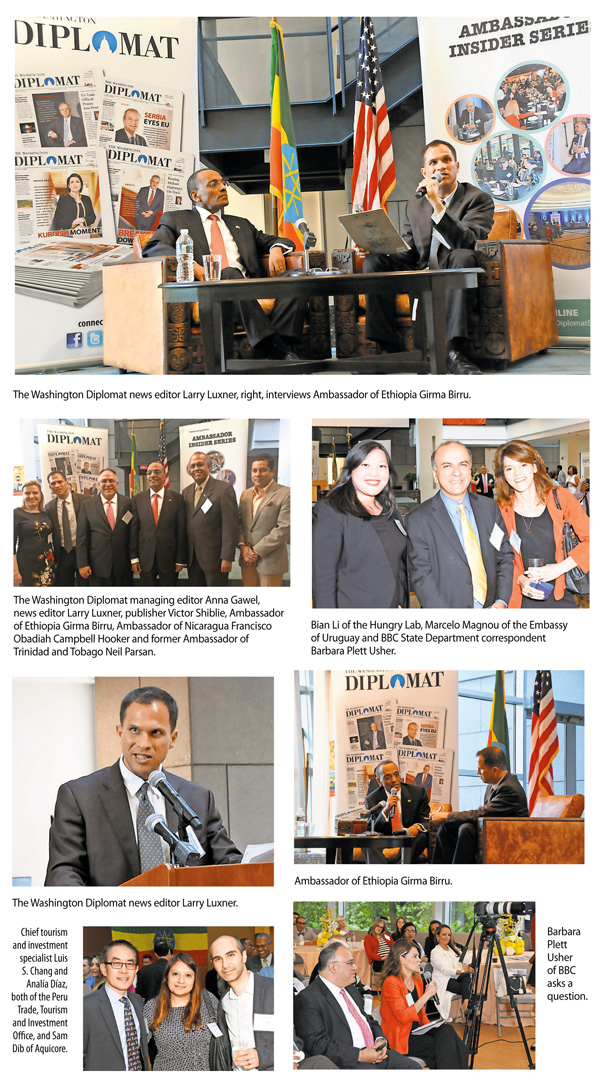 Ethiopia, once synonymous with poverty and famine, is still desperately poor. Yet it boasts one of the fastest-growing economies in Africa, with GDP expanding by 8 to 10 percent a year for most of the last decade. Foreign investors have been taking note of what already ranks as the continent’s second-most populous nation after Nigeria.

By 2050, if current growth rates continue, Ethiopia will rank ninth in the world, with nearly 170 million people.

Even so, the country struggles with social and political unrest. A deeply controversial state of emergency imposed after violent ethnic protests last year is now entering its 11th month with no end in sight. Human rights groups such as Amnesty International say nearly 700 people have died and 26,000 have been arrested — figures the government does not dispute. 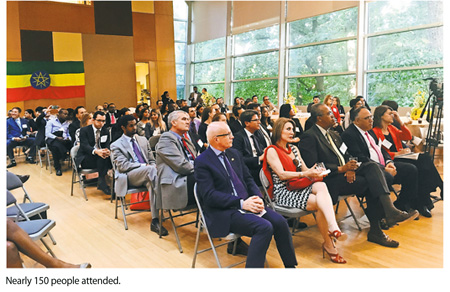 “We’re not asking for excuses. This state of emergency has worked, and now we have peace and tranquility,” said Girma Birru, Ethiopia’s ambassador to the United States. “The moment we make sure peace and security is in place, we will lift it.”

Birru, speaking at his embassy on June 27 for The Washington Diplomat’s latest Ambassador Insider Series (AIS), conceded that the current status isn’t exactly a source of pride for his government. But he said the measures were a necessary reaction to the wave of protests and rioting by the Oromo people, the country’s largest ethnic group, who complain of economic marginalization and displacement by the government to make room for the country’s rapid development.

“We’re not telling the world that having a state of emergency is something good,” he said. “We were forced to do this after a situation in which violent protesters tried to tear down investments [including foreign-owned factories]. They broke into jails and released prisoners, burned courts and put the stability of the country at stake. The only thing the government could do was put in place a state of emergency, as other countries have done.”

The state of emergency successfully quelled the violence but significantly expanded the powers of security forces while curtailing freedom of assembly and other rights. Asked where the violence originated, Birru said it stems from a combination of ethnic strife and frustration by young people who lack jobs and education.

“The unemployment rate is so high, and the government has admitted a lack of good governance. After consultations, we have agreed to address these problems,” he said. “But some of them are structural in nature. You cannot address them overnight.”

Birru has been Ethiopia’s top diplomat here for the last six and a half years. Before coming to Washington, he was Ethiopia’s minister of trade and industry for nine years, and minister of economic development and cooperation for six years before that. An economist by profession, Birru has held senior positions at the World Bank, the African Development Bank and various other institutions.

“Our relations with the United States are at a very good stage, and growing all the time,” Birru explained. “We have many areas of cooperation. On peace and security, we fully see eye to eye, and we’ve worked with the U.S. very well on this. On trade and investment, the U.S. has supported us as well.

“The third major area of cooperation is in democracy, human rights and good governance. On this we have the same goal — but on how we reach there, on what instruments we use, we sometimes have differences. At least we have agreed to sit down and talk and iron out our differences, cooperating on the things where we can work together in the short run and postponing differences so we can come back to them later.”

Some 150 people attended the June 27 event, which marked The Diplomat’s seventh Ambassador Insider Series since the program’s inception — and the first with any African ambassador.

When it comes to firsts, in fact, Ethiopia is in many ways unique. For instance, an ancient jawbone fragment discovered two years ago in Ethiopia’s Afar region is the oldest known pre-historic human fossil, dating back about 2.8 million years. Later on, Ethiopians began brewing what the world would eventually come to know as coffee.

Except for a few brief years under Italian occupation before World War II, Ethiopia is the only one of Africa’s 54 countries that was never colonized. It was the first and only headquarters of the Organization of African Unity — now the African Union — and on July 1, Ethiopia’s own Dr. Tedros Adhanom Ghebreyesus took office as the first African ever to head the World Health Organization (WHO).

“Ethiopia contributes the biggest peacekeeping force in Africa. We host about 850,000 refugees — which is the most in Africa and the fifth-largest refugee population in the world,” the ambassador pointed out. “We’re trying to play an exemplary role, doing our best to represent African countries at the G20, and the fact that an Ethiopian is now director of the WHO shows what Africans can do when they put their heads together.”

Among other things, Ethiopia now boasts the Hawassa Industrial Park — the largest of its kind in Africa — with companies investing in the venture from China, India, Belgium, France, Indonesia, Hong Kong and Sri Lanka.

In telecommunications, Ethiopia’s growth has been nothing short of phenomenal. Today, 48 percent of the nation’s inhabitants has mobile phone access, and by 2020, the government expects to have 103 million mobile subscribers and 56 million internet users.

Birru thanked the Ethiopian diaspora community for reinvesting in their homeland, especially the estimated 250,000 Ethiopians living in Washington, D.C., and suburban Maryland and Virginia, which is home to the largest concentration of Ethiopians outside the country.

“Ethiopians here love their country very much, even those who have differences with the government now in office. We appreciate that and try to assist them in connecting to their country of origin,” said Birru, noting that they send billions of dollars home each year in the form of remittances. “In addition, over 250 medical doctors here have put their resources together and pooled their money to build a big hospital in Addis Ababa to American standards.”

Last year, growth began slowing, although Ethiopia — which, unlike Nigeria is not an oil exporter — still remains one of sub-Sahara Africa’s bright spots.

Yet Americans know very little about Ethiopia, a situation Birru says is only made worse by poor coverage of Africa by U.S. news outlets.

“I don’t think the American media has been mean to Ethiopia in particular. The problem is that maybe they don’t pay sufficient attention to Africa as a whole,” he explained. “Some very important media outlets here in the U.S. have only one correspondent in all of Africa, and they keep that correspondent in one good city. I don’t want to criticize the media, but in general, if they want to write about Africa, they have to be physically there and live with the people and understand their situation.”

Today, one of Ethiopia’s most pressing problems is its severe food shortage, bringing back memories of the horrible famines that devastated the country back in the 1980s. According to Oxfam International, 5.6 million Ethiopians face severe hunger as a result of droughts caused by El Niño and climate change.

Another 9.2 million people lack access to safe drinking water, and some 300,000 children will become severely malnourished this year. Along with nearby Somalia, Kenya and Yemen, the entire Horn of Africa and its environs are now enduring their most catastrophic famine in decades, although the international community remains preoccupied with crises in the Middle East.

Still, Birru said that because of the famines of the 1980s, the government today is better mobilized for food shortages, having built an extensive network of humanitarian aid programs, food shipments and early warning systems, along with roads, clinics and other services.

Security is another ongoing regional concern. The al-Shabaab terrorist group has murdered Ethiopian troops in Somalia, and observers worry that the Islamic State — having been dislodged from its strongholds and sensing a vacuum — is making serious inroads in the Horn of Africa.

“It’s our priority to not allow al-Shabaab to expand outside the area,” Birru said in response to a question about terrorism in East Africa. “In my opinion, al-Shabaab is now in a defensive position. But it will not be destroyed only by military means. We are working with Somalia, the United States and other partners to be able to provide basic services to the people of Somalia. It’s this that will stop al-Shabaab from expanding.”

Meanwhile, Birru said that despite Ethiopia’s deep association with Christianity, 40 percent of its inhabitants profess Islam — and that his country is home to more Muslims than Saudi Arabia. In fact, Ethiopia has the third-largest Muslim population in Africa after Egypt and Nigeria.

“It’s a place where Muslims live with their Christian neighbors, and where intermarriage and tolerance has existed from day one,” he said. “In my own family, my mother’s side is Muslim, and my father’s side is Christian. We all live together in peace.”

In July 2015, President Obama became the first American head of state ever to visit Ethiopia — a trip observers considered of enormous political significance. We asked Birru whether those close bilateral ties would continue under Donald Trump. 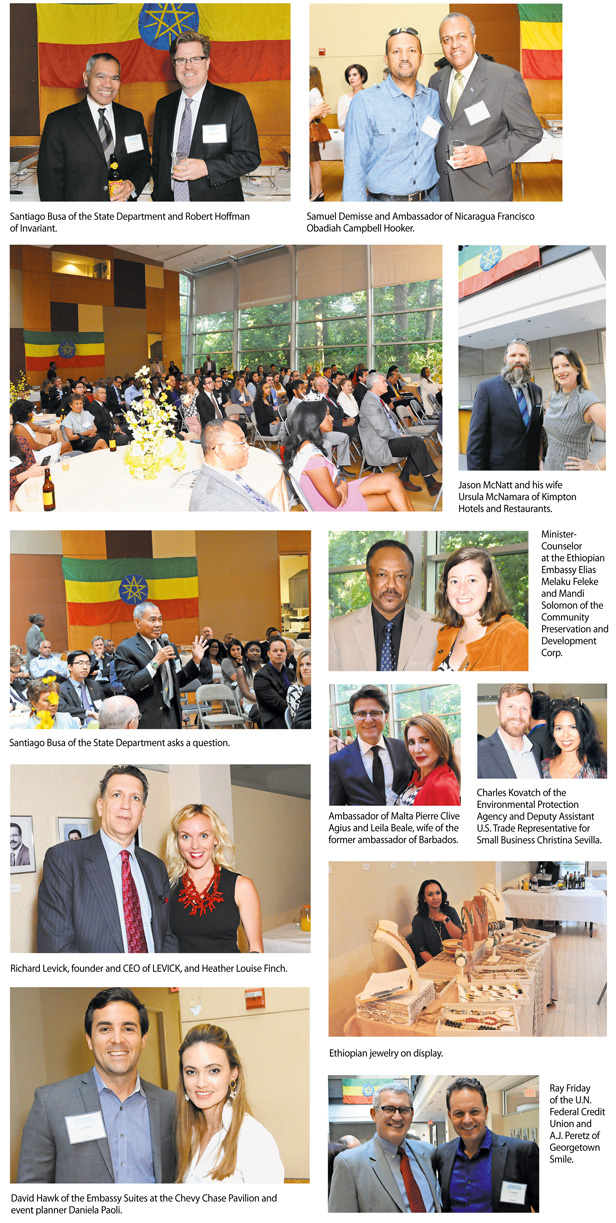 “President [George W.] Bush introduced very important health programs during his presidency, and President Obama built on them,” he replied. “Our expectation is that the president now in office will build on what earlier presidents have done. There is no reason to suspect otherwise.”